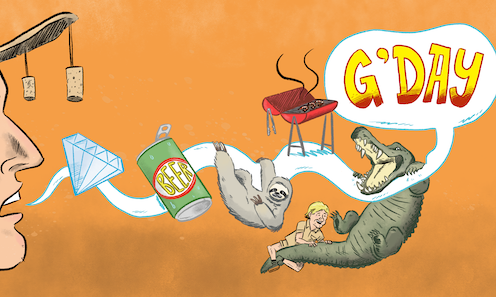 Last month, a US contestant on TV’s The Bachelor faked an Australian accent to stand out. It wasn’t a great accent. Yanks aren’t great at doing Australian English. But to be fair, when it comes to Americans and the Australian accent, we can, and do, draw on the words of “Australia’s nightingale” Dame Nellie Melba: “sing’em muck”.

A steady media diet of Paul Hogan and Steve Irwin types has left them with some funny ideas about how we Aussies talk. Stone the crows, Paul, you want me to throw another “what” on the barbie?

We say it’s time we educate our Yank mates. First step, let’s stop spreading nonsense about how lazy our accents are and all these cultural cringe-tinged myths.

In the opening years of the colony, it might surprise you to know that many saw the Aussie accent as a good thing — “pure” in the words of a few observers (and purity here doesn’t mean the absence of “foul language”, but rather the lack of regional characteristics). A Tasmanian correspondent, Sam McBurney, wrote in the Argus in April 1886:

There were no peculiarities in the colonies, but a general tendency to speak a pure English.

Alas, it was also around this time that the commentary started to change — enter those fanciful tales that link our accent to our half-open mouths, the flies, the climate, the pollen, our dental hygiene, alcohol consumption, and even our day-to-day conversations with Chinese migrants.

Sadly, Australian public figures are often the purveyors of these furphies. In the early 20th-century, Dame Nellie Melba lambasted the accent, referring to our “twisted vowels” and “distortions”, and claimed the

…general tendency to dawdle and slouch along … lies at the heart of the Australian accent.

In his 1939 contribution to the book Some Australians Take Stock, T.S. Dorsch suggested the Australian accent might arise from “a species of national sloth”. And at the end of last year, Australian New York Times columnist Julia Baird joined the public chorus lamenting the “laziness” of the accent.

“Lazy” and “slovenly” have long been the go-to adjectives for haters of the Australian accent. Language researcher Janice Reeve found them to be the two most common adjectives used in letters to the ABC Weekly from 1939-1959.

Public figures aren’t helping our image by spreading this nonsense about the Aussie accent overseas. The ideas don’t stand up to scrutiny.

What does it even mean to have a ‘lazy’ accent?

Our views of accents are arbitrary social evaluations rather than intrinsic facts, and we base them on our knowledge and experience of the people who lie behind the accents. So, when you call an accent lazy, what you’re really saying is that someone is lazy. But who? The answer is often racist, classist, sexist, and, well, lazy.

Britons asked to evaluate British accents rated the posh accents (those closer to the Queen’s English) as the most prestigious, and the urban accents as least prestigious. When Americans rated the same accents, the results got confusing.

And what about these sounds often cited as “lazy”? Baird (among others) mentions “t” becoming “d” (“impordant”) and the disappearance of “l” in the iconic “Straya”.

The first thing to point out is that the modification and disappearance of these sounds aren’t distinctively Australian. They’re not even just an English thing but make up the potpourri of linguistic changes that have been going on for centuries — in all languages.

Next, to be technical, the “t” isn’t becoming a “d” but rather a short, rapid touching of the tongue against the bump behind the teeth, known as a “tap”. It’s rather like an “r” sound. This change is widespread in global English, including British and American varieties. If you condemn it, you must also condemn those early English speakers who turned “pottage” into “poddash” and finally into modern English “porridge”.

And don’t these “disappearing” sounds like the “l” get up people’s noses?

They certainly did in the 17th century, when “l” dropped from words like “walk” and “talk”. “Negligentius” is how Wallis described the modern pronunciations “wawk” and “tawk”. He would have written “slovenly” but he chose to write his 1653 book on the grammar of English in Latin because English wasn’t up to the task.

Are such sound deletions “lazy”?

A more honest approach to such “laziness” might see us reinsert the “k” in words like “knight”, “knee” and “knot” (lost sometime during the 17th-century).

But why stop there? We might reinstate “r” throughout Australian English in “word”, “part” and “far”. But then we’d be opening ourselves up to complaints about the Americanisation of Australian English. After all, the Americans maintained the “r” in these words where the British and Australian varieties lost them in the 17th and 18th centuries.

Learning to love the Aussie accent

If you’d like to “improve” the pronunciation of others, research shows this is the wrong way to do it.

In the first instance, it implies people aren’t aware that some accents are more valued than others in different contexts. And it downplays our dynamic ability to change our accents to suit our circumstances and goals. For instance, much gets made of Bob Hawke’s “broad” Australian accent, whereas a closer examination of his accent sees him speaking “general” or even “cultivated” in formal contexts (his Boyer lectures).

In the US, Barack Obama is also a dynamic accent shifter, but his standard English accent has been met with snide observations that he is “well-spoken” (leaving one to wonder, well, why shouldn’t he be?).

In the second instance, openly negative attitudes toward less socially valued accents in the classroom often lead to shame, resentment, and even hostility toward language activities. The outcomes can be catastrophic, with consequences well beyond poor school performance. In fact, this led the Norwegian Ministry of Education to ban classroom attempts to change accents in 1878.

So, there’s no substance to the view the Australian accent is “lazy”. If you’re promoting it, then in the wise words of American “philosopher” Jeffrey Lebowski, “that’s just, like, your opinion, man”.

And it’s an opinion that is neither helping the view of Aussies overseas nor is it helping the people it proposes to help. So let’s learn to love our Aussie accents in 2019 in all forms, posh, broad, ethnic, Aboriginal — and by this we mean love the people who use them.