Today the Australian Koala Foundation announced they believe “there are no more than 80,000 koalas in Australia”, making the species “functionally extinct”.

While this number is dramatically lower than the most recent academic estimates, there’s no doubt koala numbers in many places are in steep decline.

It’s hard to say exactly how many koalas are still remaining in Queensland, New South Wales, Victoria, South Australia and the Australian Capital Territory, but they are highly vulnerable to threats including deforestation, disease and the effects of climate change.

Once a koala population falls below a critical point it can no longer produce the next generation, leading to extinction.

Read more: Koalas sniff out juicy leaves and break down eucalypt toxins – it's in their genome

What does ‘functionally extinct’ mean?

The term “functionally extinct” can describe a few perilous situations. In one case, it can refer to a species whose population has declined to the point where it can no longer play a significant role in their ecosystem. For example, it has been used to describe dingoes in places where they have become so reduced they have a negligible influence on the species they prey on.

Dingoes are top predators, and therefore can play a significant role in some ecosystems. Our innocuous, leaf-eating koala cannot be considered a top predator.

For millions of years koalas have been a key part of the health of our eucalyptus forests by eating upper leaves, and on the forest floor, their droppings contribute to important nutrient recycling. Their known fossil records date back approximately 30 million years so they may have once been a food source for megafauna carnivores. 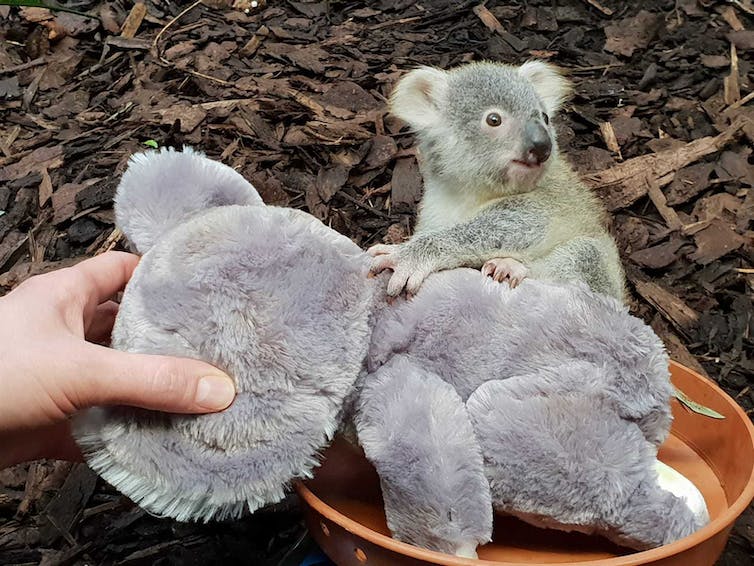 This eight-month old joey, shown being weighed with the aid of a cuddly toy, is one of the only Queensland koalas in the UK. Zoo populations alone cannot save koalas from extinction. RZSS/Cover Images/AAP

Functionally extinct can also describe a population that is no longer viable. For example in Southport, Queensland, native oyster reef beds are functionally extinct because more than 99% of the habitat has been lost and there are no individuals left to reproduce.

Finally, functionally extinct can refer to a small population that, although still breeding, is suffering from inbreeding that can threaten its future viability. We know that at least some koala populations in urban areas are suffering in this way, and genetic studies on the Koala Coast, located 20kms south-east of Brisbane, show that the population is suffering from reduced genetic variation. In South East Queensland, koalas in some areas have experienced catastrophic declines

We also know that koala populations in some inland regions of Queensland and New South Wales are affected by climate extremes such as severe droughts and heatwaves and have declined by as much as 80%.

Exhaustive multi-disciplinary koala research continues apace in an effort to find ways of protecting wild koala populations and ensuring that they remain viable now and into the future. Habitat loss, population dynamics, genetics, disease, diet and climate change are some key areas being studied.

How many koalas are there?

Koala researchers are often asked “how many koalas are in the wild?” It’s a hard question to answer. Koalas are not stationary, are patchily distributed throughout an extremely wide range encompassing urban and rural areas in four states and one territory, and are usually difficult to see.

To determine whether each population of koalas scattered across eastern Australia is functionally extinct would require a gargantuan effort. 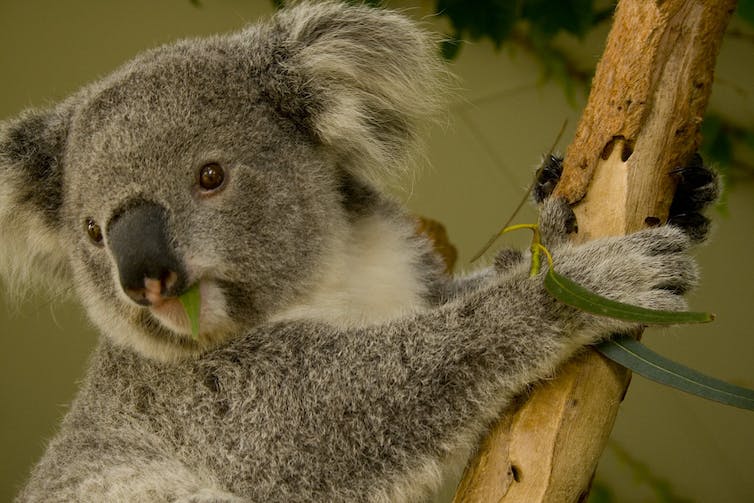 In 2016, in an attempt to determine population trends for the koala within the four states, a panel of 15 koala experts used a structured, four-step question format to estimate bioregional population sizes of koalas, and changes in those sizes.

Since May 2012, koalas have been listed as vulnerable in Queensland, New South Wales and the Australian Capital Territory because populations in these regions have declined significantly or are at risk of doing so.

In the southern states of Victoria and South Australia, koala populations vary widely from abundant to low or locally extinct. Although not currently listed as vulnerable, these koalas are also experiencing a range of serious threats, including low genetic diversity.

To date, the present “vulnerable” listing has not achieved any known positive results for koala populations in Queensland and New South Wales. In fact, recent research invariably shows the opposite.

Read more: Koalas can learn to live the city life if we give them the trees and safe spaces they need

This is because the key threats to koalas remain, and are mostly increasing. The primary threat is habitat loss. Koala habitat (primarily eucalyptus woodlands and forests) continues to rapidly diminish, and unless it is protected, restored, and expanded, we will indeed see wild koala populations become “functionally extinct”. We know what comes after that.