First Nations people in Australia face structural barriers to political participation. The institutions of government remain predominantly white, and almost 60 years after being given the right to vote, very few Indigenous people have been elected to parliament in a system dominated by two major parties. Candidates who do stand for election are subjected to racism and open discrimination.

But things are beginning to change for the better. The 2016 election resulted in the highest-ever number of Indigenous members of parliament with Ken Wyatt (Liberal, Hasluck) and Linda Burney (Labor, Barton) elected to the House of Representatives, and Patrick Dodson (Labor, WA), Malarndirri McCarthy (Labor, NT) and Jacqui Lambie (Jacqui Lambie Network, Tasmania) in the Senate. (Lambie was later forced to resign under Section 44 of the constitution due to dual citizenship.)

The 2016 federal election campaign also saw a record number of First Nations candidates, with 17 standing for election, including 11 pre-selected for one of the major parties. For the upcoming election, that record has been broken, with at least 22 candidates counted on the IndigenousX website. However, only eight of these are running for the major parties, and even fewer in winnable seats.

Read more: Constitutional reform made easy: how to achieve the Uluru statement and a First Nations voice

Another sign of progress: Wyatt was appointed minister for Aged Care and Indigenous Health in 2017 – the first Indigenous MP to be promoted to the ministry – and Burney and Dodson currently serve on the frontbench of the opposition. If Labor is elected, Dodson will be named Indigenous Affairs minister, another first for First Nations people. 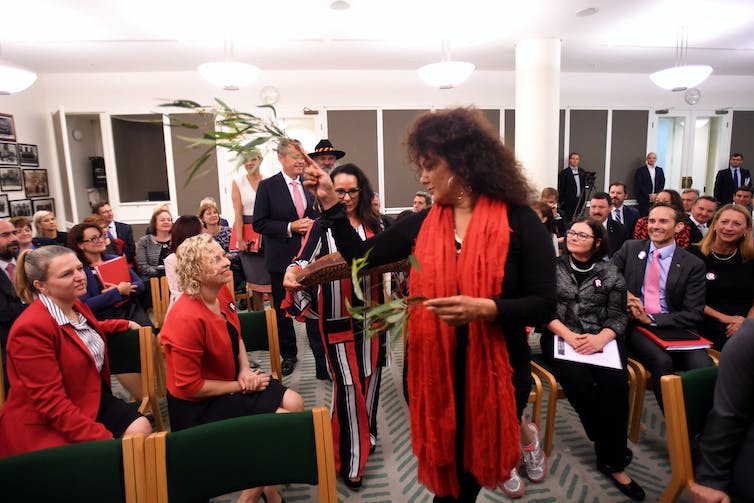 Indigenous MPs Linda Burney and Malarndirri McCarthy bless members of the Labor party during a welcome ceremony at the start of a caucus meeting. Lukas Coch/AAP

In the House of Representatives, Wyatt is recontesting the marginal seat of Hasluck in WA, and Burney, the ALP shadow minister for social services, is recontesting the safer NSW seat of Barton. In the Senate, McCarthy and Dodson will also likely be re-elected.

Other candidates to watch include Liberal Warren Mundine, who has been controversially “parachuted” in to contest the NSW seat of Gilmore. Mundine was national president of the ALP in 2006-7 and previously contested elections for Labor. In this election, he is running against a strong ALP candidate in Fiona Phillips, the Nationals’ Katrina Hodgkinson, and Grant Schultz, who lost his pre-selection to Mundine and is standing as an independent.

In the NT, two First Nations candidates are competing against ALP member Warren Snowdon in Lingiari – Jacinta Price for the Country Liberal Party and George Hanna for the Greens. (Price has called for Hanna to be dropped by the Greens after he posted a racially insensitive meme about her on social media.)

Most other First Nations candidates face long odds to win their races.

In New South Wales, Susan Moylan-Coombs is running as an independent in Warringah against Tony Abbott, but is overshadowed in media coverage by independent Zali Steggall. In Wentworth, Dominic Wy Kanak is running again for the Greens against high-profile candidates Kerryn Phelps and David Sharma.

At least eight more Indigenous candidates are standing for the Senate, but their chances of election are also not strong. Former Senator Jacqui Lambie is recontesting in Tasmania for her Jacqui Lambie Network. And former Senator Joanna Lindgren is standing for the Australian Conservatives in Queensland after losing her seat in the 2016 election as Coalition candidate against Pauline Hanson.

Respected Ngarrindjeri elder Major Moogy Sumner is on the Greens ticket in South Australia, but his chances are very slim. And Tania Major, who is well-known in Queensland for her work with Noel Pearson’s Cape York Institute and was Young Australian of the Year in 2007, is standing for the ALP in Queensland. After a bitter pre-selection, though, she has been relegated to fourth on the ticket and is unlikely to be successful.

A balancing act for many

Research shows that First Peoples face “representational dilemmas” once in parliament, as they are forced to manage expectations of diverse First Nations communities, while also serving the needs of non-Indigenous constituents and supporting their party’s overall policies.

While the support of a major party is often critical to getting elected, the challenges of obeying party discipline once in parliament can be deeply frustrating. In 2014, Wyatt notably persuaded the Liberal Party room to reverse its decision to soften racial vilification laws by threatening to cross the floor of parliament. Two years later, he indicated he would be open to reviewing the language in the act.

Wyatt has also been unable to convince his party to move forward on constitutional recognition of Indigenous peoples and has been forced to defend the Coalition government’s lack of progress on Indigenous issues. 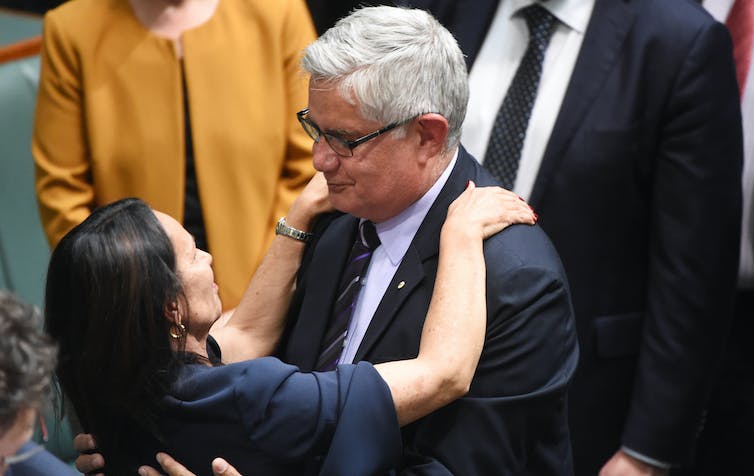 In the same way that Julia Gillard’s rise to prime minister prompted more women to take an active interest in politics, the visible presence of First Nations MPs can encourage other Indigenous candidates to stand for election, recognising the power and everyday impact of the decisions made by parliamentarians. This may help lift the chronically low levels of Indigenous voter enrolment and turnout, and support efforts by the Australian Electoral Commission to increase participation, particularly in remote areas.

Another critical element of Indigenous representation in parliament is the diversity of viewpoints it brings to policy-making. First Nations MPs have frequently spoken of their own personal histories and life experiences in debates, especially in their first speeches.

Their connections with First Nations communities are also vital in holding the government accountable. McCarthy and Dodson have played a critical role in questioning Nigel Scullion, the current minister for Indigenous Affairs, in Senate estimates hearings about the impact of government policies on Indigenous communities. In 2016, for instance, Dodson said Scullion showed:

An appalling demonstration of ignorance about the criminal justice system and its interface with Indigenous peoples, about existing cultures in prisons, within police departments.

First Nations representation in parliament has also had a policy impact. Burney has observed that First Nations MPs actively work together across the party divide to raise issues of importance to Indigenous communities, including constitutional recognition.

Within the Labor Party, they have formed a First Nations caucus, which has played a significant role in developing policy. Dodson credited the caucus with the development of Labor’s “Fair Go for First Nations” platform, which includes enshrining an Indigenous voice to parliament in the constitution and creating regional assemblies to get First Nations input on policy-making. Dodson says the ALP wants to be the “party of choice” for First Nations people.

The significance of the role played by these First Nations MPs in changing the policy agenda, even in opposition, cannot be overstated. The Coalition government’s Indigenous Advancement Strategy, cashless welfare card and remote employment program have come under sustained and informed criticism by Indigenous members of the opposition and remain important issues in this campaign.

And importantly, despite the Turnbull government’s rejection of the demands of the Uluru Statement from the Heart, the issues of “voice, treaty, truth” remain on the agenda, thanks to the unstinting efforts of activists and supporters both outside and inside parliament.