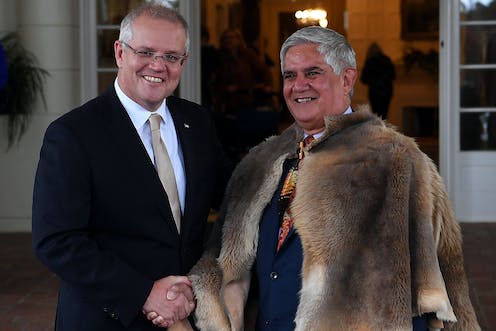 Wearing his Noongar kangaroo skin booka, the significance of this appointment should not be understated. The short history of Indigenous participation in Australia’s political community is one of exclusion. But that exclusion was never the result of a lack of Indigenous persistence and ability.

Read more: Constitutional reform made easy: how to achieve the Uluru statement and a First Nations voice

Australian society has come a long way since the days of oppressive exclusion. But we still bear the heavy burden of a history of torment and powerlessness. Perhaps more than any other member of cabinet, Ken Wyatt will feel the weight of history, hope and expectation as he faces the challenge of Indigenous affairs.

The Indigenous affairs portfolio has had a long and troubled history. Nigel Scullion’s tenure as minister was plagued by significant issues and dissatisfaction from within the Indigenous community. Multiple reports have been scathing of the Commonwealth’s policies, especially its flagship Indigenous Advancement Strategy (IAS) and Closing the Gap (CTG).

The 2017 review of the IAS by the Australian National Audit Office was particularly scathing. The report found a culture of arbitrary decision-making, a lack of transparency, poor record-keeping, a lack of oversight and accountability, no access to review of decisions, and a significant number of submissions having been lost.

The reviews of CTG were also scathing. Reports emphasised a continued failure to make significant inroads in targeted outcomes, despite over a decade of policy action.

Most striking, though, has been the clear frustration of the Indigenous community with a government that has ignored Indigenous peoples and worked according to dated and paternalistic practices.

This frustration resulted in the formation of a coalition of peak Indigenous bodies. This coalition in turn was able to obtain a negotiated partnership with the Council of Australian Governments (COAG) announced in December 2018.

COAG acknowledged a need for actions to:

align with Aboriginal and Torres Strait Islander peoples’ and communities’ priorities and ambition as a basis for developing action plans.

This is important recognition of the desire of Indigenous peoples to control their own affairs through community-controlled delivery of service programs. COAG also recognised that “to effect real change, governments must work collaboratively and in genuine, formal partnership with Aboriginal and Torres Strait Islander peoples as they are the essential agents of change”.

These policy concerns are part of the broader place and understanding of Indigenous peoples within Australia. This foundational issue informed the Uluru Statement from the Heart and its sequenced priorities of voice, treaty and truth. Fully aware of the difficult history and challenges ahead, the Uluru Statement from the Heart asked all Australians “to walk with us in a movement of the Australian people for a better future”.

Read more: The Indigenous community deserves a voice in the constitution. Will the nation finally listen?

Wyatt faces a significant challenge. That cannot be denied. Any increased expectations on him because he is Indigenous should be tempered.

It is hard to say what Wyatt’s first priority as minister should be, as there are so many issues demanding attention. Indigenous youth suicide and the much maligned Community Development Program stand out. But the relationship between Indigenous peoples and other Australians, including the respect and recognition of Aboriginal and Torres Strait Islander people, remains front and centre of the work ahead.

Wyatt brings a notable difference to the Indigenous affairs portfolio. He is experienced, having served as a senior public servant and as an MP since 2010. He has been minister for aged care and Indigenous health. He has also been involved in and is supportive of major reform agendas being called for in Indigenous affairs – implementing the Uluru Statement from the Heart and achieving meaningful partnerships with Indigenous Australians.