A ten-year-old Perth boy is the latest Australian child to die from suspected influenza so far this year. This follows the deaths of three Victorian children, and a teenager in South Australia.

Influenza-associated deaths in childhood are uncommon. Despite this, influenza is the most common cause of vaccine-preventable death – more common than meningococcal disease or pertussis (whooping cough).

On average, between five and ten Australian children are reported to die from influenza each year. Tragically, many flu deaths occur in previously healthy children.

These deaths can frequently be prevented through vaccination: analysis by Australian researchers determined that of the children who died from influenza in New South Wales in the ten years to 2014, none were vaccinated.

Influenza virus is predominantly spread in droplets created when people with flu cough and sneeze. The virus can also live on objects touched by those with flu, picked up by the hands of others.

Children are more likely to catch and spread influenza: they have large volumes of virus in their nasal secretions and, after infection, shed this for days. They also have poorer hygiene practices, often coughing and spluttering over those closest to them.

For many young children with flu, it is the first time they are exposed to the virus. Their immune system is naïve to influenza and therefore responds more slowly to the infection. This means the influenza virus can cause significant ill-effects before the immune system can bring it under control.

Thousands of children who contract the flu are hospitalised every year; hospitalisation rates in children are much greater than in older people. Children younger than five years are the age group most likely to be hospitalised.

Although children with underlying medical conditions including chronic disorders of the heart, lungs, nervous and immune system are most susceptible, more than half of children admitted to hospital each year are healthy.

What should you look out for?

Influenza most commonly causes fever, cough, headache, a sore throat and a runny nose. The virus can also infect the lungs, causing pneumonia.

Some children react to the infection by developing vomiting, diarrhoea and muscle aches and pains.

Many parents aren’t aware that influenza can also cause damage to the brain, heart, kidneys and muscles. It is unclear why these complications occur in some children and not others, but they can be severe.

Young children get frequent infections and often develop symptoms that are difficult to distinguish from influenza. Testing on a nose or throat swab can be done to confirm if the illness is caused by influenza virus.

Parents should seek medical attention if their child:

Most importantly, if you’re worried about your child during the flu season, see a doctor. 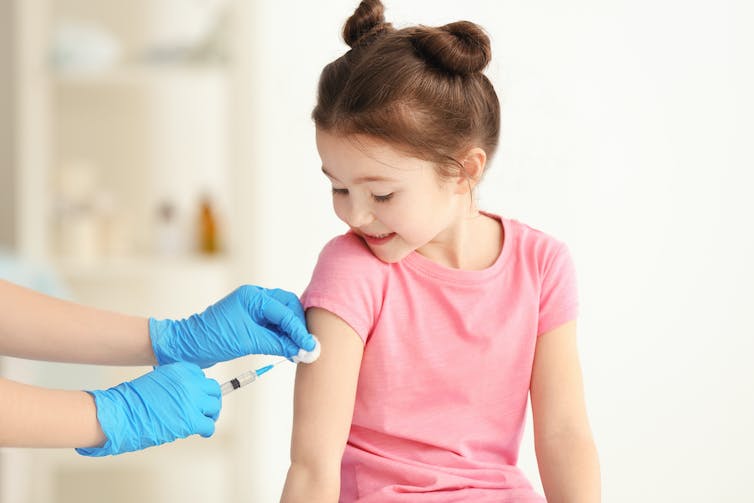 Vaccination is the most effective way to protect your child against the flu. From shutterstock.com

How does this year’s season compare?

Australia has had an unusual start to the 2019 influenza season, with higher numbers of cases during the warmer months than expected.

The number of cases of influenza diagnosed each week is currently greater than in 2017 and in the 2009 swine flu pandemic.

In 2017, Australia experienced its worst influenza season on record. More than 220,000 Australians were diagnosed with influenza, with health-care services and hospitals inundated with children, adults and the elderly suffering the effects of influenza.

The stories of healthy young people succumbing to flu were particularly heartbreaking.

Although it is never possible to predict what will happen in coming months, a number of measures point to a larger than average influenza season in 2019.

How can I protect my children?

Vaccination is recommended for all Australians from six months of age.

It’s free for all children aged from six months to under five years, those with certain medical risk factors including severe asthma and chronic heart, respiratory, neurological and immune conditions, all Aboriginal and/or Torres Strait Islander people, pregnant women, and people aged 65 years and over.

Those too young to be vaccinated (children five months and younger) are protected by their mothers being vaccinated during pregnancy.

You can get your family vaccinated at your local general practice, council or community health clinic, or Aboriginal Medical Service.

If you or your child are not eligible for a free flu vaccine, the usual vaccine cost is around A$20.

As the virus is constantly changing, the effectiveness of the vaccine can vary each year. Australian research has shown that the risk of flu is reduced, on average, by 50-60% in children who receive the vaccine.

This can mean that some children who get vaccinated will unfortunately still get the flu. However, some evidence suggests the disease will be milder if you catch it and have been vaccinated.

It’s not possible to predict who will catch the flu or develop complications, but vaccination remains the most effective and safest tool to protect children against influenza.

Read more: Should I get the flu shot if I'm pregnant?

Childhood flu vaccination programs have an added bonus of reducing flu in others in the community who are not vaccinated by reducing the spread of the virus. This is called “herd” or “community” immunity and particularly helps protect vulnerable people who may be at risk of becoming seriously ill with the flu.