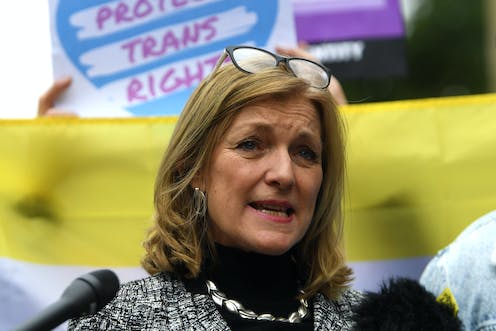 In the midst of heated public debate over the federal government’s draft Religious Discrimination Bill, Patten’s bill has been given far less attention.

The Racial and Religious Tolerance Amendment Bill is described by Patten as an “Australia-first” attempt to target hate speech and trolling on social media, particularly against women.

Others have warned of unintended consequences that may arise related to free speech, likening the bill to section 18C of the Racial Discrimination Act.

But in reality, Patten’s bill provides a common sense approach to protecting Victorians from harmful verbal abuse at a time when such protections are being eroded at the federal level.

Parliamentary debate on the bill continues this week.

What is the current Victorian law?

This prohibits a person from engaging in conduct against another person or group in public that incites:

Any of these four standards can be used to meet the threshold test for vilification. If this is met, a claimant can lodge a complaint through the Victorian Equal Opportunity and Human Rights Commission (VEOHRC) or the Victorian Civil and Administrative Tribunal (VCAT).

However, this conduct is only prohibited when it is on the basis of another person or group’s race or religion.

There are some exceptions where reasonable statements made in good faith are rendered lawful. This includes artistic works, academic and scientific works, fair media reporting, and statements made “in the public interest”.

It is also considered a more serious criminal offence when a person “intentionally” engages in conduct that the person “knows” is likely to vilify.

What does the Patten bill do?

The bill also grants new powers to the VEOHRC to be able to request information from any relevant person or business to identify online “trolls” after a vilification complaint has been made.

Such requests could require, for instance, social media companies to hand over information on individuals who engage in online abuse through “anonymous” accounts. This request only applies to existing complaints, though. It does not provide a carte blanche right for authorities to search through social media to identify offenders, and is subject to VCAT approval.

The bill also contains appropriate confidentiality and privacy controls to prevent unreasonable disclosure of this information.

The bill also does not change the threshold test for vilification, except that “incitement” is replaced with “likely to incite”. As such, conduct would be prohibited if it was “likely to” incite hatred, serious contempt, revulsion, or severe ridicule on the basis of the above attributes (including race or religion).

Further, consistent with other Australian jurisdictions, the bill would deem “reckless” vilification a criminal offence. This would cover dangerous acts of vilification in which an offender has wilfully disregarded the harm caused to other people, even if they may not have “intended” the outcome.

This ensures judges do not have to subjectively “go inside” the heads of offenders to ascertain their knowledge at the time of an offence, which can lead to unpredictable results.

Why are the changes needed?

The Patten bill would ensure that women, the LGBTI+ community and people with disabilities are afforded the same protections from harmful abuse as those granted for race and religion.

Over 64% of LGBTI+ people between the ages of 16 and 27 have been subject to verbal abuse on the basis of their sexual orientation, gender identity or intersex status. Thoughts of self-harm are almost twice as likely to occur for LGBTI+ young people after they have been subject to such abuse.

Read more: Marriage equality was momentous, but there is still much to do to progress LGBTI+ rights in Australia

Thirty percent of all women have experienced online abuse or harassment, with a third of these reporting fears for their physical safety as a result.

Further, a significant proportion of complaints under Tasmania’s strong anti-vilification laws are from people with disabilities.

All of these groups deserve protection.

The Patten bill would also modernise a nearly 20-year-old law that is largely ill-equipped to deal with online abuse.

The bill would particularly help the VEOHRC in responding to complaints over online gendered hate speech and bullying, such as that directed at AFLW player Tayla Harris earlier this year.

What about concerns about the bill’s reach?

Despite reports to the contrary, the bill is not “section 18C on steroids”.

Section 18C of the Racial Discrimination Act prohibits acts that are “reasonably likely” to “offend, insult, humiliate or intimidate” a person or group. These standards are lower than the threshold test for racial and religious vilification under Victorian law.

Indeed, complaints under the current Victorian law are hardly voluminous; only 26 were lodged in the past two years.

Read more: Section 18C is an important part of a civilised society and no threat to free speech

Suggestions that the bill reaches far beyond other Australian anti-vilification laws and uniquely restricts free speech are also blatantly incorrect.

Tasmania provides far stronger protection for vilification, prohibiting conduct that a reasonable person would anticipate would offend, insult, ridicule, humiliate or intimidate another person. It also protects a more expansive range of attributes that include age, relationship status and pregnancy.

The main difference is that those three jurisdictions do not protect gender, while the Patten bill (and Tasmania) does.

Considering the prevalence of online gendered abuse, the protection of women in anti-vilification laws is entirely appropriate. Indeed, the unique aspect of Patten’s bill is its granting of important additional powers to address largely gendered online abuse and trolling.

The Patten bill is not a radical attack on free speech. Rather, it represents a sound, appropriate and balanced approach to protecting vulnerable groups from harmful abuse, particularly in our social media age.

In a period where the federal government is undermining and overriding existing discrimination and vilification protections, this bill provides some much-needed hope and reason.