Calls from industry and unions for increased thinning in forests to reduce bushfire risks have been met with concern from conservation scientists. They suggest forest thinning makes forests more fire prone.

So who’s right? Well, it’s complicated. The short answer is forest thinning is a good way to lower the risk of fire and is a widely-used strategy to improve forest health. However, there are potential downsides. Thinning needs to be carefully planned to avoid effects on soil, water or sensitive habitats.

Read more: Yes, native plants can flourish after bushfire. But there’s only so much hardship they can take

Unlike clearfell logging and selection harvesting, mechanical thinning for timber involves felling about half the trees in even-aged, uniformly structured forests. Recently, forest managers are using the practice more for ecological outcomes.

If we look to the future, the recent fires have created conditions for forest regeneration on a large scale. These regenerating forests will thin naturally over time, creating more fuel and increased risk of more large-scale fires. Mechanical thinning can remove this potential flammable vegetation.

Forest thinning should be one of the ways we tackle fire management and forest resilience in future, but we need more research to understand the best way to go about it. Here’s what the evidence says.

Thinning is a natural forest process, where tree numbers in most even-aged forests reduce through competition over time. For example, Mountain ash forests regenerating naturally after a severe fire might have hundreds of thousands of new seedlings per hectare that self-thin to a few thousand after 20 years, and a few hundred after 80 years. 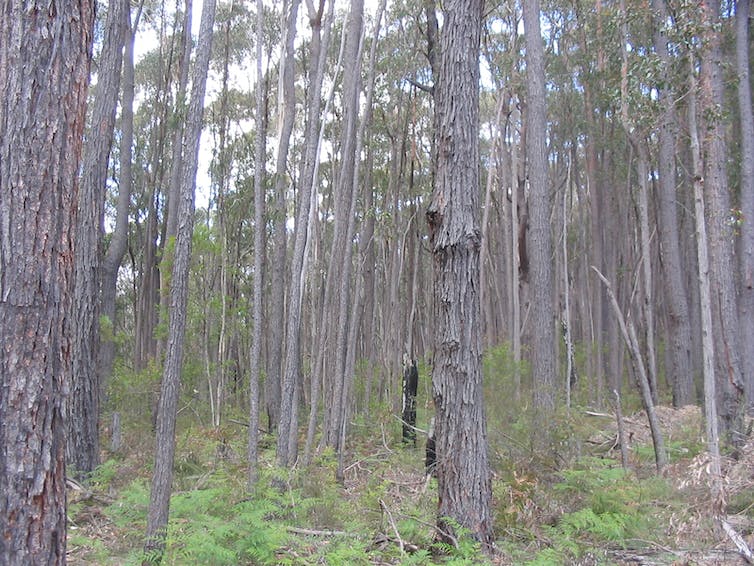 Mechanical thinning for producing timber is a long-standing commercial forestry practice that uses herbicides, chainsaws or mechanical harvesters. It reduces tree numbers and concentrates growth on fewer trees so they reach a valuable size more quickly. This is to improve commercial timber quality, or to more quickly remove trees that would die through natural thinning.

Thinning for ecological outcomes, on the other hand, is a relatively recent practice being tested in many parts of Australia. It can produce more rapid development of “old-growth” forest features, such as large trees, branches, hollows and coarse woody debris – all important wildlife habitats.

Read more: Bushfires left millions of animals dead. We should use them, not just bury them

Forest managers are using thinning for other reasons, too. For example, to adapt to climate change by reducing stresses on individual trees from increased drought, heat, insects, disease or wildfire because, among other things, thinning takes away the added stress of competition.

Looking ahead, thinning combined with Indigenous cultural burning may even be a way to restore Australian forests to more open park-like conditions observed at the time of arrival of Europeans.

The case for thinning to reduce fire risk

Thinning to reduce fire risk is intended to slow the rate fire spreads, lower flame heights and improve recovery after wildfire hits. This was shown in a 2016 extensive review of US research, which found thinning and prescribed burning helped reduce fire severity, tree mortality and crown scorch. A 2018 study on Spanish pine forests had similar results. 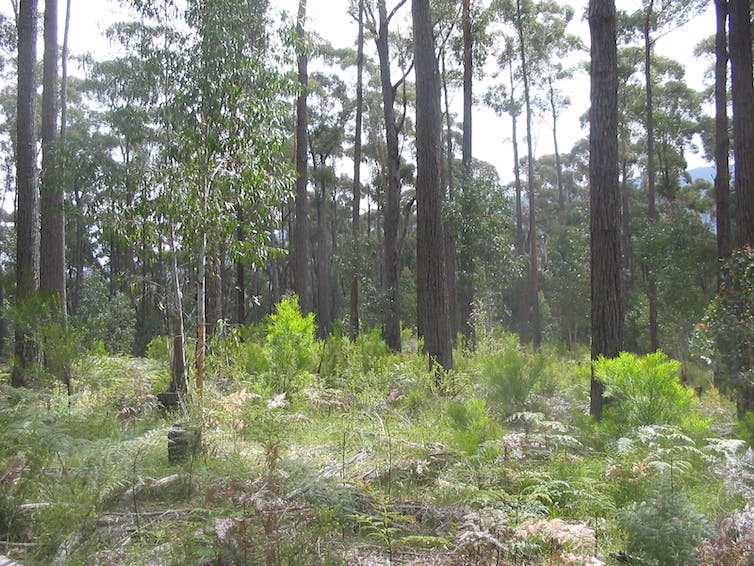 Our own research on Australian forests also supported these findings. We found mechanical thinning plus burning in silver top ash reduces fire fuel hazard, with major reductions in dead trees, stumps and understory.

We compared thinned and unthinned alpine ash forests using computer modelling, simulating severe to extreme weather conditions. And we found modelled fire intensity decreased by 30% and the rate of fire spread and spot fires moving ahead of the main fire decreased by 20% with thinning.

Reducing tree density and fuel through thinning can also make it easier and safer for fire-suppression activities, like direct attack with fire hoses, litter raking or back burns, increasing our chances to control the size of wildfires.

Another study from 2015 in East Gippsland forests found that while overall fuel hazard was lower at thinned sites than nearby unthinned sites, larger woody debris from thinning persisted for 15 years or longer.

This is both a good and bad thing. More logs or woody debris may slow fire spreading, but can make it harder to completely extinguish fires after the fire front passes through.

Thinning is potentially costly, but selling the wood or other organic matter may offset the cost. Timber harvesting machines can also disturb soils or wildlife habitat, but these can be minimised with modern equipment and careful planning.

What’s more, forests store carbon. Thinning can, in the short term, release carbon dioxide into the atmosphere. The overall effect on carbon emissions in the long term, however, depends on the extent thinning reduces fire risk and intensity. In some cases, we may need to accept decreased forest carbon storage in return for reduced risks. 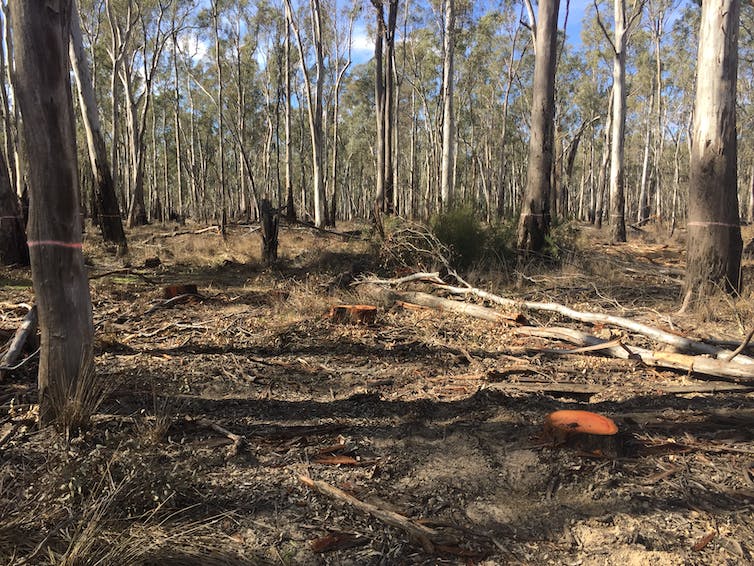 A thinned river red gum forest. Thinning has the potential to disturb wildlife habitats and soil.

We’ve seen in the media arguments about using thinning to manage bushfire risks. It’s important conservation and bushfire scientists, the timber industry and government bodies understand all concerns and create space for inclusive dialogue to identify where thinning and prescribed burning are best practised.

In any case, whether you’re for or against the practice, more research is needed to determine how much we should use it. In 2017, the Federal Government funded mechanical fuel reduction trials in three states. But these trials must be expanded to a national program.

This can be done in using adaptive management – trialling the practice at larger scale and monitoring the outcomes.

The evidence from Australia and overseas is compelling, but we need careful planning and thoughtful discussion about how to use thinning to its full potential as part of our strategy in addressing the escalating risks of bushfires in a changing climate.