While the world rightfully focuses on the COVID-19 pandemic, the planet is still warming. This summer’s Antarctic weather, as elsewhere in the world, was unprecedented in the observed record.

Our research, published today in Global Change Biology, describes the recent heatwave in Antarctica. Beginning in late spring east of the Antarctic Peninsula, it circumnavigated the continent over the next four months. Some of our team spent the summer in Antarctica observing these temperatures and the effect on natural systems, witnessing the heatwave first-hand.

Antarctica may be isolated from the rest of the continents by the Southern Ocean, but has worldwide impacts. It drives the global ocean conveyor belt, a constant system of deep-ocean circulation which transfers oceanic heat around the planet, and its melting ice sheet adds to global sea level rise.

Antarctica represents the simple, extreme end of conditions for life. It can be seen as a ‘canary in the mine’, demonstrating patterns of change we can expect to see elsewhere. 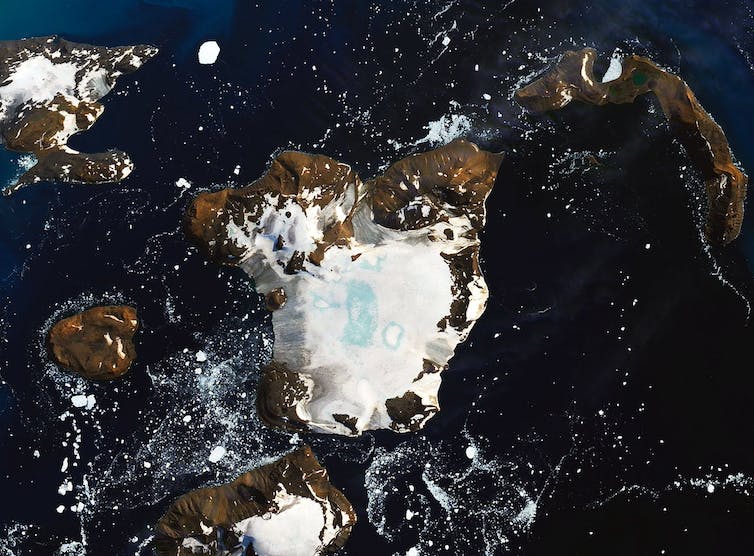 A heatwave in the coldest place on Earth

Most of Antarctica is ice-covered, but there are small ice-free oases, predominantly on the coast. Collectively 0.44% of the continent, these unique areas are important biodiversity hotspots for penguins and other seabirds, mosses, lichens, lakes, ponds and associated invertebrates.

This summer, Casey Research Station, in the Windmill Islands oasis, experienced its first recorded heat wave. For three days, minimum temperatures exceeded zero and daily maximums were all above 7.5°C. On January 24, its highest maximum of 9.2°C was recorded, almost 7°C above Casey’s 30-year mean for the month.

Read more: Scientists looked at sea levels 125,000 years in the past. The results are terrifying

The arrival of warm, moist air during this weather event brought rain to Davis Research Station in the normally frigid, ice-free desert of the Vestfold Hills. The warm conditions triggered extensive meltwater pools and surface streams on local glaciers. These, together with melting snowbanks, contributed to high-flowing rivers and flooding lakes.

By February, most heat was concentrated in the Antarctic Peninsula at the northernmost part of the continent. A new Antarctic maximum temperature of 18.4°C was recorded on February 6 at Argentina’s Esperanza research station on the Peninsula - almost 1°C above the previous record. Three days later this was eclipsed when 20.75°C was reported at Brazil’s Marambio station, on Seymour Island east of the Peninsula. 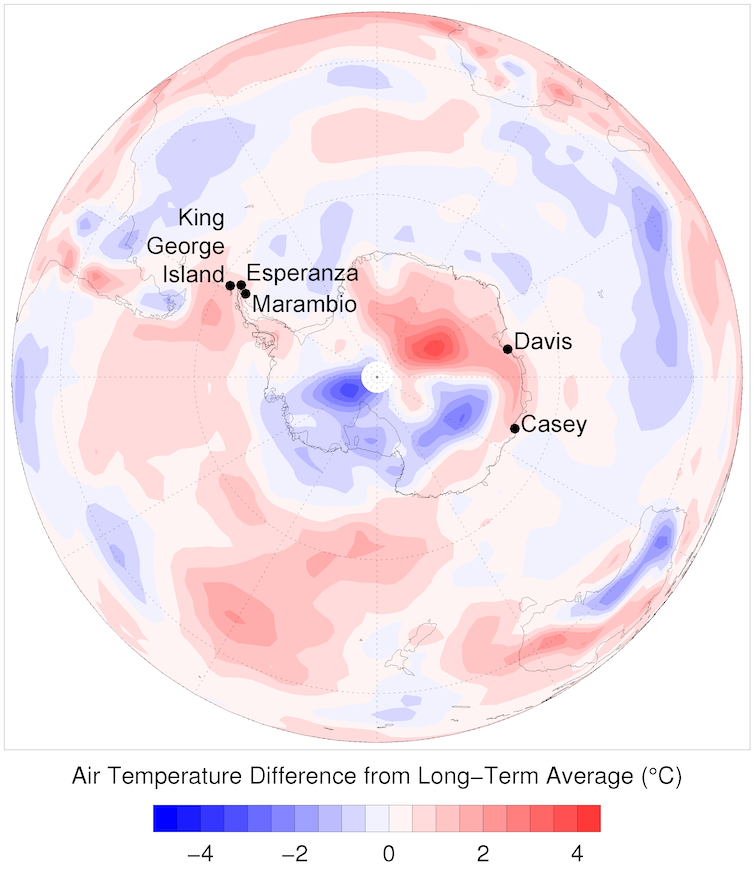 The difference between mean surface air temperatures for January 2020 from the January average over the preceding 40 years. Andrew Klekociuk using NCEP/NCAR Reanalysis 1 data provided by the NOAA/OAR/ESRL PSD, Author provided (No reuse)

What caused the heatwave?

The pace of warming from global climate change has been generally slower in East Antarctica compared with West Antarctica and the Antarctic Peninsula. This is in part due to the ozone hole, which has occurred in spring over Antarctica since the late 1970s.

But during the spring of 2019 a strong warming of the stratosphere over Antarctica significantly reduced the size of the ozone hole. This helped to support a more ‘negative’ state of the Southern Annular Mode and weakened the shield.

Other factors in late 2019 may have also helped to warm Antarctica. The Indian Ocean Dipole was in a strong ‘positive’ state due to a late retreat of the Indian monsoon. This meant that water in the western Indian Ocean was warmer than normal. Air rising from this and other warm ocean patches in the Pacific Ocean provided energy sources that altered the path of weather systems and helped to disturb and warm the stratosphere.

Is a warming Antarctica good or bad?

Localised flooding appeared to benefit some Vestfold Hills’ moss banks which were previously very drought-stressed. Prior to the flood event, most mosses were grey and moribund, but one month later many moss shoots were green.

Given the generally cold conditions of Antarctica, the warmth may have benefited the flora (mosses, lichens and two vascular plants), and microbes and invertebrates, but only where liquid water formed. Areas in the Vestfold Hills away from the flooding became more drought-stressed over the summer.

High temperatures may have caused heat stress in some organisms. Antarctic mosses and lichens are often dark in colour, allowing sunlight to be absorbed to create warm microclimates. This is a great strategy when temperatures are just above freezing, but heat stress can occur once 10°C is exceeded.

On King George Island, near the Antarctic Peninsula, our measurements showed that in January 2019 moss surface temperatures only exceeded 14°C for 3% of the time, but in 2020 this increased fourfold (to 12% of the time).

Based on our experience from previous anomalous hot Antarctic summers, we can expect many biological impacts, positive and negative, in coming years. The most recent event highlights the connectedness of our climate systems: from the surface to the stratosphere, and from the monsoon tropics to the southernmost continent.

Under climate change, extreme events are predicted to increase in frequency and severity, and Antarctica is not immune.