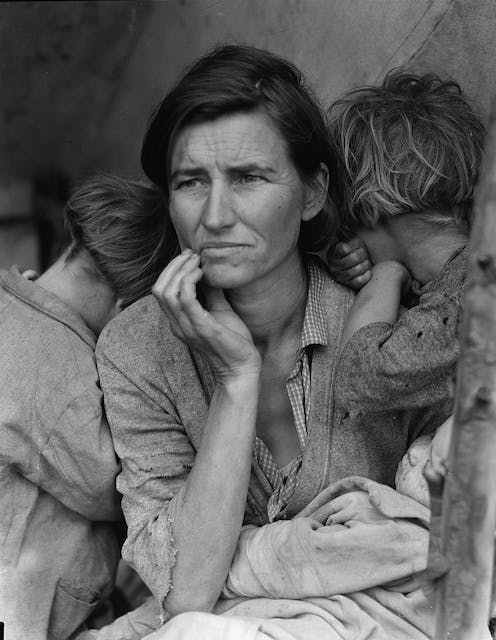 As two photographers who happen to be mothers, we think critically about the way photography overly determines the image of...

As two photographers who happen to be mothers, we think critically about the way photography overly determines the image of “The Mother”.

One iconic example is Dorothea Lange’s Migrant Mother, taken in depression-era America. The central figure is framed by her two children who lean against her, while her arms perform the quintessentially nurturing pose – the maternal embrace of an infant.

Lange’s photograph reenacts the ultimate symbol of femininity: Madonna and child. But not all photographs of mothers are the same. From early snapshots to images on screen, how mothers appear in photographs speaks to our changing view of their role in the family and in society.

Read more: Psychology behind why your mom may be the mother of all heroes

The woman behind the child

The mother appears throughout the history of photography. Perhaps the first illustrated demonstration of a mother’s involvement in the form is a drawing by Theodore Maurisset. Detailed in this illustration is a mother who comically wrestles with her reluctant child to have his photographic portrait taken. 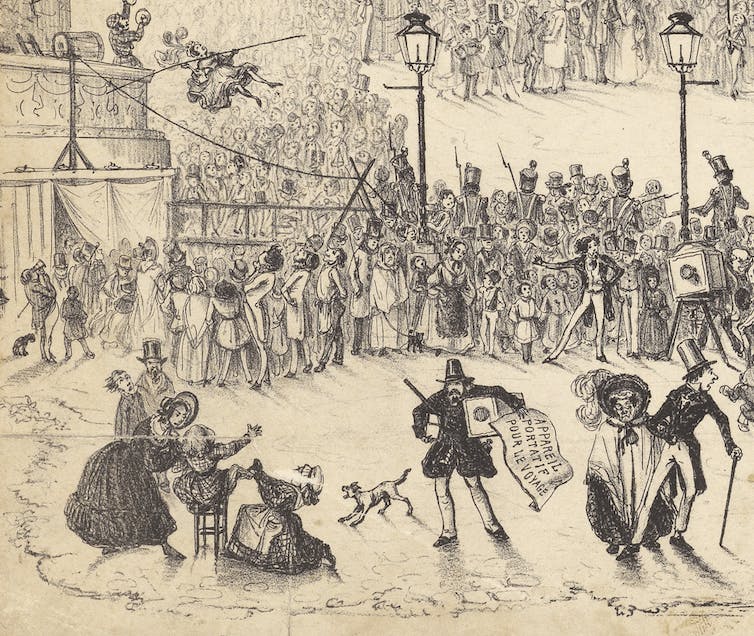 The next time she appears, in the Victorian era, she is the “Hidden Mother” smothered under thick velvet fabric to hold her child still enough to be photographed clearly. She is furniture. 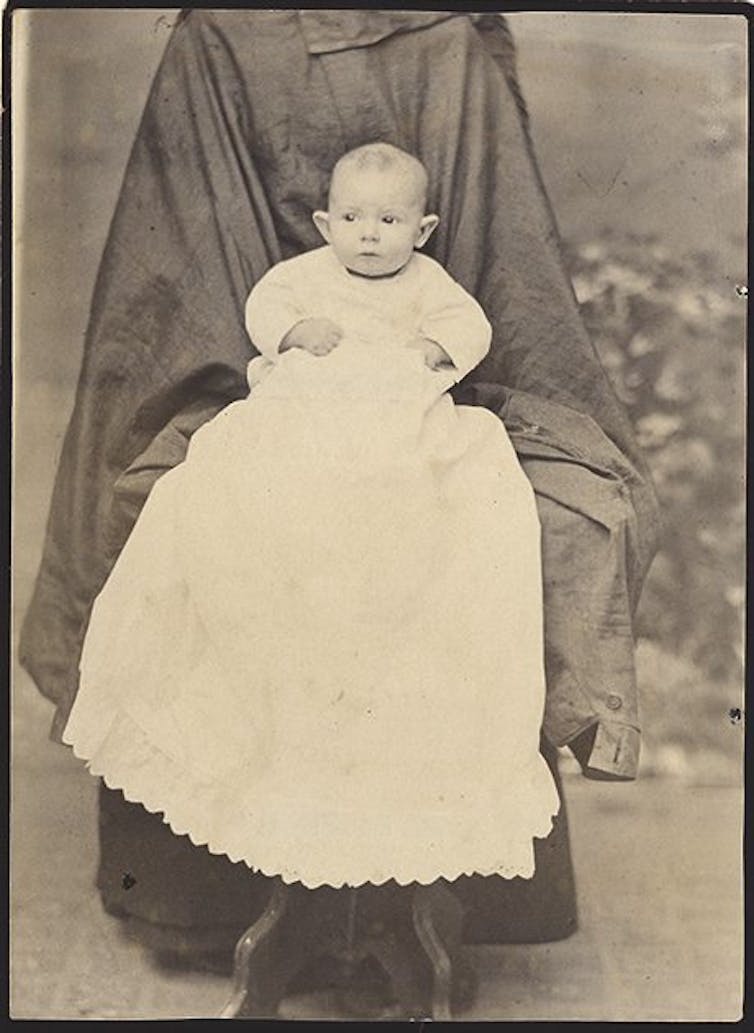 In Victorian era baby photographs, mothers are used to prop up their subjects. Wikimedia

In the most significant photographic treatise on photography, Camera Lucida, Roland Barthes continues the hidden theme.

Central to this intimate book is a picture of his mother as a six-year-old girl, which Barthes calls the Winter Garden photograph. While pivotal to the book, he never shows us the image, declaring her picture could only have meaning for him.

The Winter Garden photograph takes Barthes to a time before his mother was a mother. It allows him to recognise her autonomy and passage into the role of mother: “I studied the little girl and at last rediscovered my mother”.

He finds her not as a teenager, but as an innocent child.

Roland Barthes and his mother, around 1925.

This notion of purity links us to the ideal image of moral good associated with Christianity’s immaculate mother.

We come into the world from the mother. First pictured in utero and then pushed, surgically removed or pulled out into the world and her arms – breast-fed, bottle-fed, skin-on-skin.

In a technological society, birth is a photographic event. From pregnancy through to delivery, a mother’s identity is mediated through conception – her status changes from woman to mother. 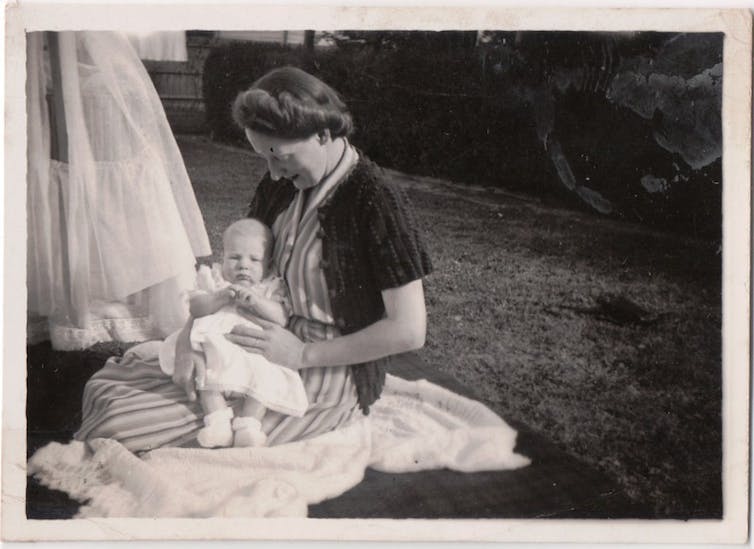 Mother and child in a photograph captioned: ‘Stel and Don when he was 3 months old’. Genealogical Society of Victoria/Flickr

As advertisers remind us, this archetype hinges on her visual representation performing everyday activities. The most ubiquitous images visualise her in the home: performing housework; displaying her culinary and baking flair. 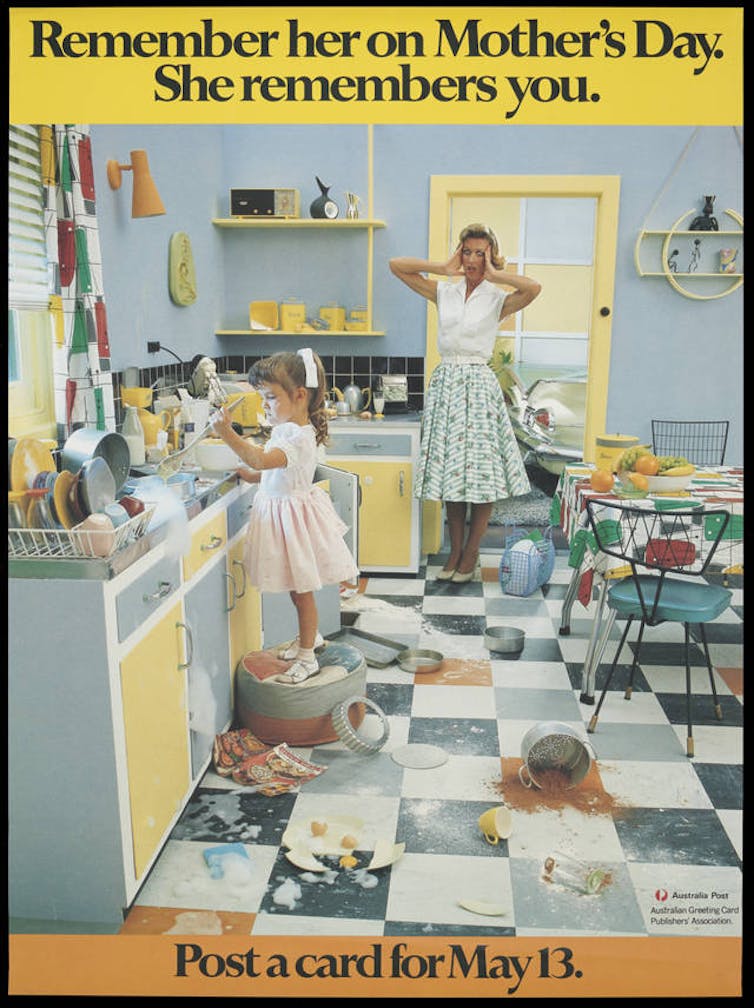 National Museum of Australia Over time, the mother shifts and changes. Here she is a 1950s housewife, there she is a modern soccer mum. She glows pregnant in the style of Demi Moore on the cover of Vanity Fair and later Beyonce and the yummy mummies of Instagram. Her values change, but her role remains prescribed by her relation to the child and the nuclear family. If she doesn’t fit this mould, she transgresses from her role into the “other mother”. While monstrous mother, working mother, evil mother, angry mother, crack mother are archetypes presented in cinema and literature, there are few photographic examples that capture her departure from purity. 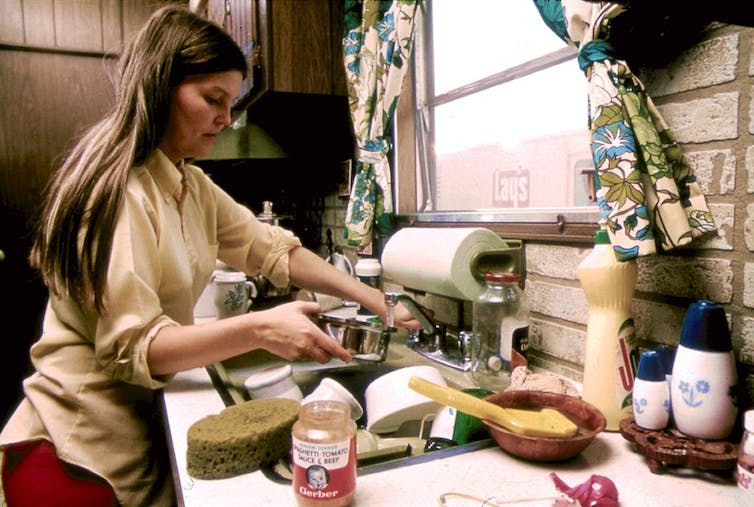 Mother provider in the kitchen, always. Horacio Villalobos/Wikimedia Photography is limited in its capacity to represent such complexity without caption or heavy-handed parody. In 2018, Alec Soth photographed mothers struggling with opioid addiction for the New York Times magazine. Soth’s images don’t moralise or glamorise. Without the accompanying captions, the women appear simply in relation to their children. Read more: Forget flowers and chocolates for Mother's Day: keep free childcare going instead The possibilities If she is not the prescribed archetypal mother, or the transgressive mother, what other photographic possibilities are there for her? The popular Instagram account and book Mothers Before shows photographs of mothers before they became mothers, submitted and captioned from the perspective of their children. While the images show mothers in their youth, the captions still describe each woman in terms of her value as caregiver. Last week, Fiona Wolf won the Head On Photography Festival’s portrait category for The Gift, RHW 2020, which showed the “modern family story of a girl born by a warrior woman to two loving dads”. 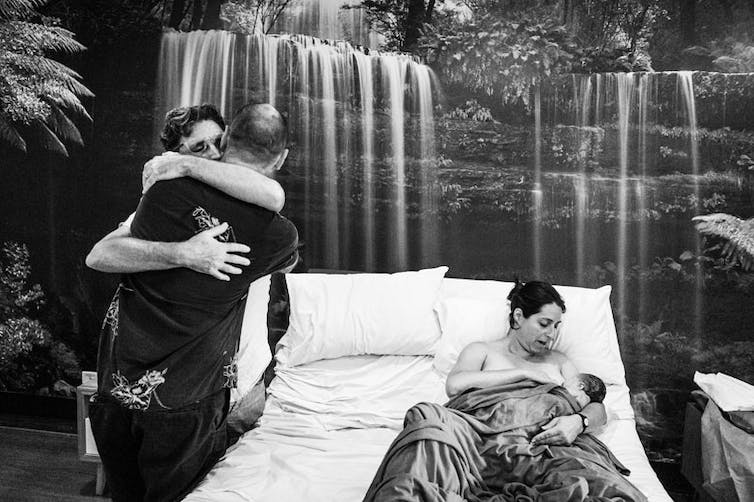 Fiona Wolf’s The Gift, RHW 2020. Head On Festival Fashion photographer Charlie Engman represents his mother in close collaboration with her. The work they do together sidesteps cliches. In his book MOM, Engman provides us with an image of motherhood that sits outside of the usual tropes of family portrait photography and the nurturing matriarch. We get a glimpse of a woman who is a person in her own right and in charge of her image, regardless of her reproductive status. Unlike Barthes’ mother, Engman’s mother has a name: Kathleen McCain Engman. She has sexuality, agency, and is far from the hidden mother. She is in a category of her own: amorphous, elusive and individual.