It is little wonder the life of Hemi Pomara has attracted the attention of writers and film makers. Kidnapped in the early 1840s, passed from person to person, displayed in London and ultimately abandoned, it is a story of indigenous survival and resilience for our times.

Hemi has already been the basis for the character James Pōneke in New Zealand author Tina Makereti’s 2018 novel The Imaginary Lives of James Pōneke. And last week, celebrated New Zealand director Taika Waititi announced his production company Piki Films is adapting the book for the big screen – one of three forthcoming projects about colonisation with “indigenous voices at the centre”.

Until now, though, we have only been able to see Hemi’s young face in an embellished watercolour portrait made by the impresario artist George French Angas, or in a stiff woodcut reproduced in the Illustrated London News.

Drawing on the research for our forthcoming book, Empire, Early Photography and Spectacle: the global career of showman daguerreotypist J.W. Newland (Routledge, November 2020), we can now add the discovery of a previously unknown photograph of Hemi Pomara posing in London in 1846.

This remarkable daguerreotype shows a wistful young man, far from home, wearing the traditional korowai (cloak) of his chiefly rank. It was almost certainly made by Antoine Claudet, one of the most important figures in the history of early photography.

For decades this unique image has sat unattributed in the National Library of Australia. It is now time to connect it with the other portraits of Hemi, his biography and the wider conversation about indigenous lives during the imperial age. 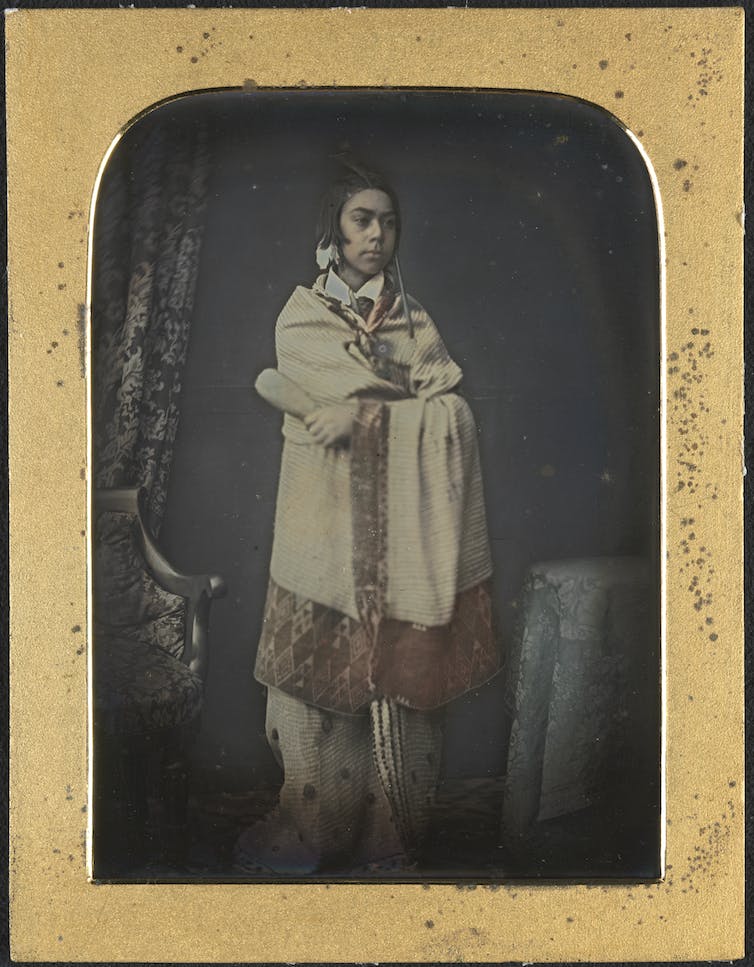 Hemi Pomara led an extraordinary life. Born around 1830, he was the grandson of the chief Pomara from the remote Chatham Islands off the east coast of New Zealand. After his family was murdered during his childhood by an invading Māori group, Hemi was seized by a British trader who brought him to Sydney in the early 1840s and placed him in an English boarding school.

The British itinerant artist, George French Angas had travelled through New Zealand for three months in 1844, completing sketches and watercolours and plundering cultural artefacts. His next stop was Sydney where he encountered Hemi and took “guardianship” of him while giving illustrated lectures across New South Wales and South Australia.

Angas painted Hemi for the expanded version of this lecture series, Illustrations of the Natives and Scenery of Australia and New Zealand together with 300 portraits from life of the principal Chiefs, with their Families.

The collar of a white shirt, the cuffs of white pants and neat black shoes peak out from the otherwise enveloping garment. Hemi is portrayed as an idealised colonial subject, civilised yet innocent, regal yet complacent.

Read more: To build social cohesion, our screens need to show the same diversity of faces we see on the street

Angas travelled back to London in early 1846, taking with him his collection of artworks, plundered artefacts – and Hemi Pomara.

Hemi appeared at the British and Foreign Institution, followed by a private audience with Queen Victoria and Prince Albert. From April 1846, he was put on display in his chiefly attire as a living tableau in front of Angas’s watercolours and alongside ethnographic material at the Egyptian Hall, London.

The Egyptian Hall “exhibition” was applauded by the London Spectator as the “most interesting” of the season, and Hemi’s portrait was engraved for the Illustrated London News. Here the slightly older-looking Hemi appears with darkly shaded skin and stands stiffly with a ceremonial staff, a large ornamental tiki around his neck and an upright, feathered headdress. 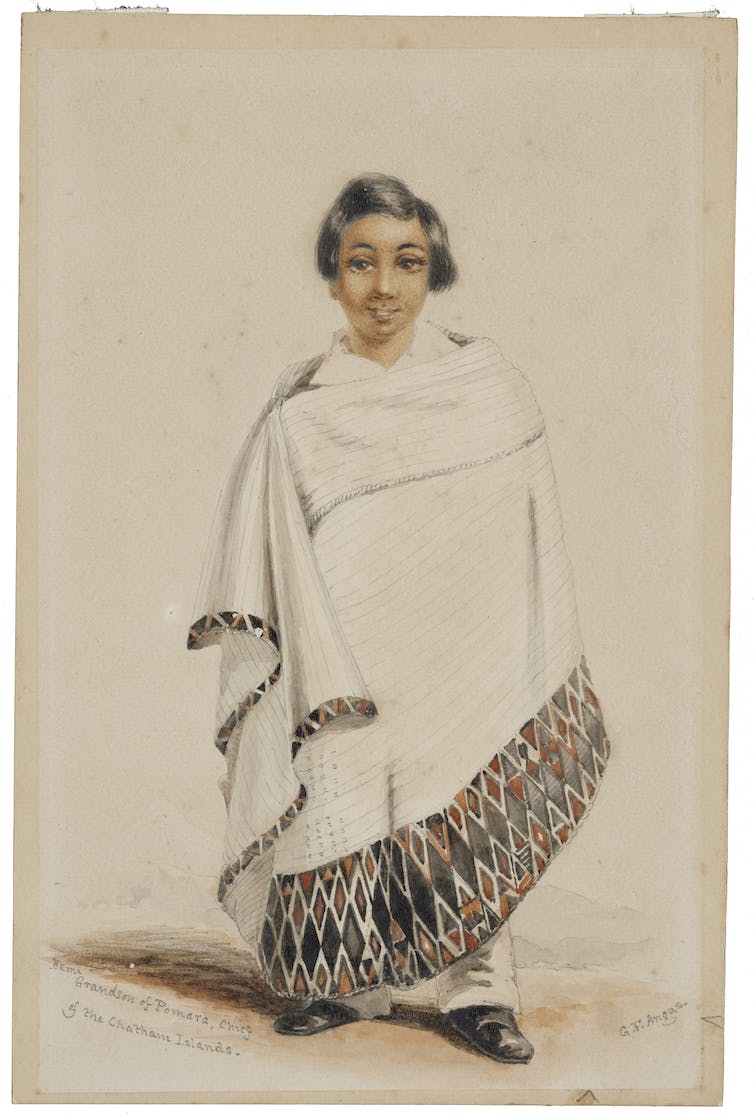 Hemi was also presented at a Royal Society meeting which, as The Times recorded on April 6, was attended by scores of people including Charles Dickens, Charles Darwin, and the pioneering London-based French daguerreotypist Antoine Claudet.

It was around this time Claudet probably made the quarter-plate daguerreotype, expertly tinted with colour, of Hemi Pomara in costume.

The daguerreotype was purchased in the 1960s by the pioneering Australian photo historian and advocate for the National Library of Australia’s photography collections, Eric Keast Burke. Although digitised, it has only been partially catalogued and has evaded attribution until now.

Unusually for photographic portraits of this period, Hemi is shown standing full-length, allowing him to model all the features of his korowai. He poses amidst the accoutrements of a metropolitan portrait studio. However, the horizontal line running across the middle of the portrait suggests the daguerreotype was taken against a panelled wall rather than a studio backdrop, possibly at the Royal Society meeting.

Hemi has grown since Angas’s watercolour but the trim at the hem of the korowai is recognisable as the same garment worn in the earlier painting. Its speckled underside also reveals it as the one in the Illustrated London News engraving.

Hemi wears a kuru pounamu (greenstone ear pendant) of considerable value and again indicative of his chiefly status. He holds a patu onewa (short-handled weapon) close to his body and a feathered headdress fans out from underneath his hair.

We closely examined the delicate image, the polished silver plate on which it was photographically formed, and the leatherette case in which it was placed. The daguerreotype has been expertly colour-tinted to accentuate the embroidered edge of the korowai, in the same deep crimson shade it was coloured in Angas’s watercolour.

Read more: Director of science at Kew: it's time to decolonise botanical collections

The remainder of the korowai is subtly coloured with a tan tint. Hemi’s face and hands have a modest amount of skin tone colour applied. Very few practitioners outside Claudet’s studio would have tinted daguerreotypes to this level of realism during photography’s first decade.

Hallmarks stamped into the back of the plate show it was manufactured in England in the mid-1840s. The type of case and mat indicates it was unlikely to have been made by any other photographer in London at the time. 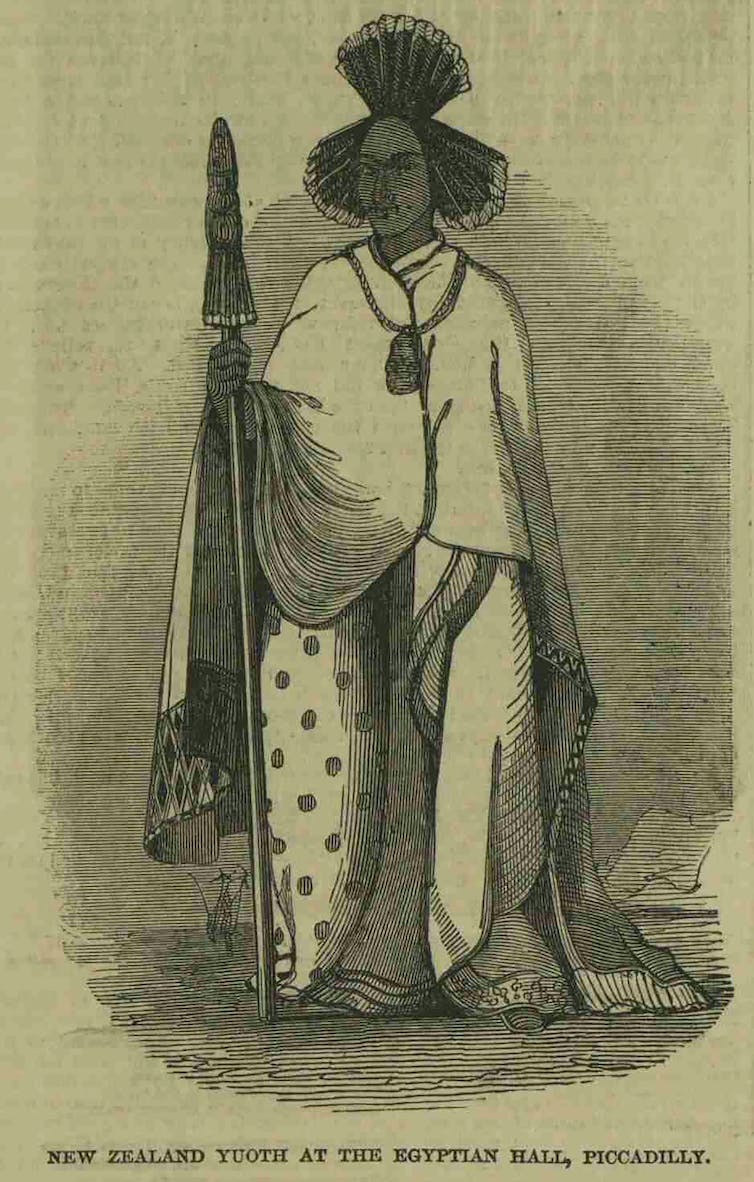 After his brief period as a London “celebrity” Hemi went to sea on the Caleb Angas. He was shipwrecked at Barbados, and on his return aboard the Eliza assaulted by the first mate, who was tried when the ship returned to London. Hemi was transferred into the “care” of Lieutenant Governor Edward John Eyre who chaperoned him back to New Zealand by early December 1846.

Hemi’s story is harder to trace through the historical record after his return to Auckland in early 1847. It’s possible he returned to London as an older married man with his wife and child, and sat for a later carte de visite portrait. But the fact remains, by the age of eighteen he had already been the subject of a suite of colonial portraits made across media and continents.

With the recent urgent debates about how we remember our colonial past, and moves to reclaim indigenous histories, stories such as Hemi Pomara’s are enormously important. They make it clear that even at the height of colonial fetishisation, survival and cultural expression were possible and are still powerfully decipherable today.

For biographers, lives such as Hemi’s can only be excavated by deep and wide-ranging archival research. But much of Hemi’s story still evades official colonial records. As Taika Waititi’s film project suggests, the next layer of interpretation must be driven by indigenous voices.