Sea level rise is a serious threat to the low-lying islands of the Republic of Kiribati in the central Pacific Ocean. To fight it, their president recently announced he plans to raise the islands to make them habitable as long as possible.

President Taneti Maamau will seek support from China for this ambitious strategy, and recently switched his nation’s allegiance from Taiwan to China to make this happen. It’s a bold move, considering China’s sights are set on military and economic expansion across the Pacific region, yet Maamau insists on maintaining Kiribati’s independence.

Maamau’s response to the looming climate crisis in Kiribati shows he is a president determined not to capitulate to western narratives of vulnerability.

Unlike President Anote Tong before him, who held the widely commended policy of migration, the Maamau viewpoint is not simply a difference of opinion – it’s a culturally grounded expression of human dignity.

Kiribati is made up of atolls – the sinking summits of volcanic islands from the flanks of which coral reefs grow upwards. Unconsolidated sands and gravels tossed up onto these reefs by storm waves form the atoll islands, which are typically narrow, sinuous and low.

Most of us cannot imagine the everyday challenges of life there. The ocean is omnipresent, impossible to ignore, and a threat that could extinguish life on the island with just a short-lived flourish. 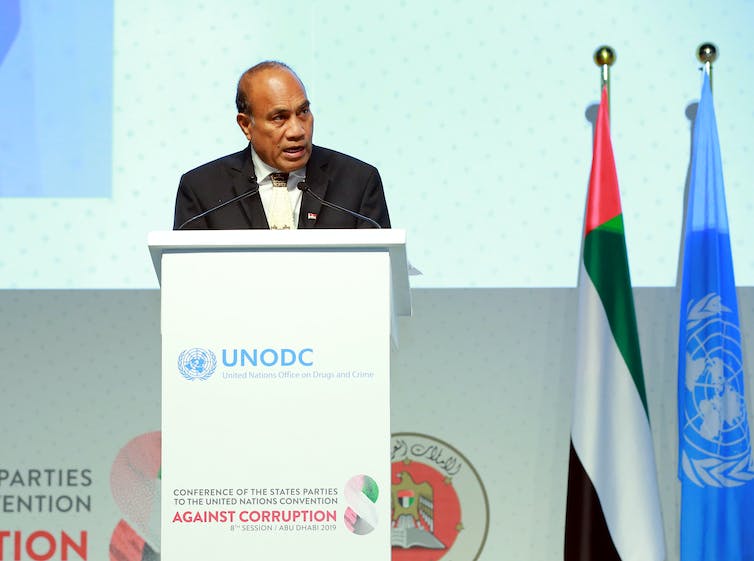 But for too long, the people of Kiribati have been pummelled and demeaned by global narratives that treat them as vulnerable.

This view ignores the fact that proud peoples have lived on atolls in the equatorial Pacific for millennia, surviving countless disasters.

For example, the people of Pukapuka Atoll in the northern Cook Islands speak of a night about 400 years ago as “te mate wolo” (the great death). Then, a giant wave washed over the island, destroying all the houses and food gardens, and killing everyone save two women and 17 men who were left to rebuild Pukapukan society.

By the end of this century, the average global sea level may be over a metre higher than today. The highest point of most atolls in Kiribati (and elsewhere) is less than three metres.

Such stark figures might ring alarm bells for those pondering atoll life, but many atoll islands show few signs of shrinking. That said, no scientists studying this unexpected resilience believe the situation will last indefinitely.

Like sprawling low-lying river deltas and low-lying coasts in every part of the world, the effect of rising sea level for the remainder of the 21st century and beyond will force profound changes to coastal geographies – atoll islands included.

There are two ways to respond. One is to agree with the Western narrative and accept that the rapidly rising sea level will progressively eat away at the fabric of your islands until they become uninhabitable, and eventually submerged. This idea of moving elsewhere – to a less fragile place – is a natural response, and the view former Kiribati president Anote Tong held. 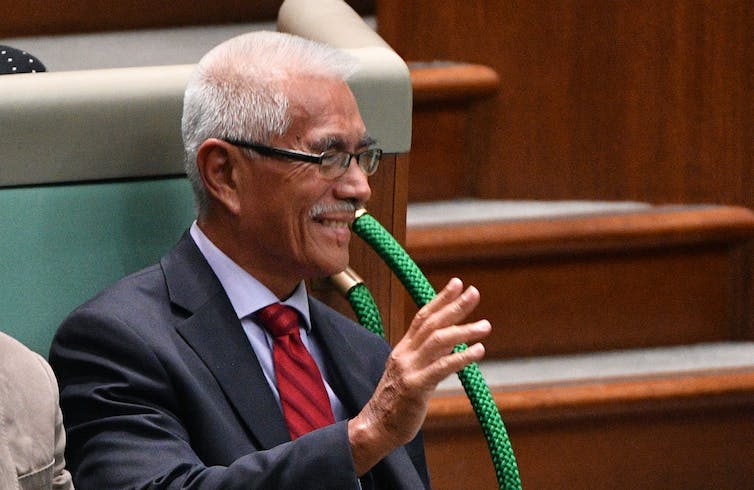 Former Kiribati president Anote Tong’s view was to migrate away from the islands. AAP Image/Mick Tsikas

But Tong is no longer in charge. Taneti Maamau has been elected president of Kiribati in the last two elections. His response, which clearly has popular appeal given his latest resounding win, 26,053 to 17,866, is quite different.

He is confronting the overwhelmingly negative international rhetoric about atoll futures, designing and driving a way forward that will ensure livelihoods can be sustained in Kiribati for the foreseeable future.

He needs help, a role China appears willing to assume, but on his own terms - no large loans and no military bases.

Whether this position proves realistic is uncertain. Like many smaller Pacific Island countries, Kiribati has exhibited a growing dependence on foreign aid for the provision of basic services over the past few decades.

However, such dependence is unsustainable given the likely soaring costs of domestic adaptation to climate change in donor countries.

Read more: Pacific Islands must stop relying on foreign aid to adapt to climate change, because the money won’t last

Yet Kiribati is a special case. Its Exclusive Economic Zone (where it claims exclusive rights for economic activities such as fishing or drilling) covers a huge area of almost 3.5 million square kilometres, giving it a bargaining chip with more affluent yet less well-endowed nations.

Today, raised causeways connect many atoll islands rising from the same reef for people and vehicles to cross.

Causeways are relatively cheap to construct but also inhibit water movements between atoll lagoons and the surrounding ocean, focusing wave attack on particular parts of islands. 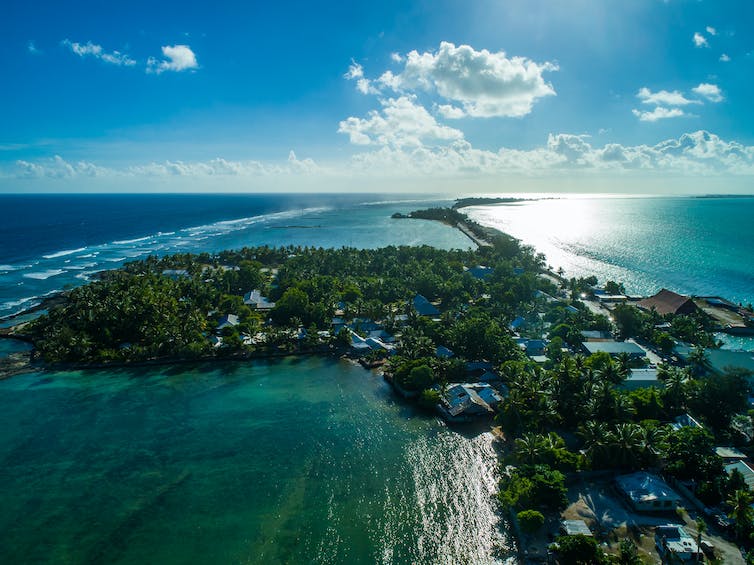 Tarawa, an atoll and the capital of the Republic of Kiribati. People have lived on atolls for millennia and survived disasters. Shutterstock

Maamau’s plan is to replace these causeways with bridges, to improve lagoon-ocean water exchange and perhaps help restore island coasts to their natural state. It’s an expensive and engineeringly-challenging solution the Chinese are likely to relish given their construction of lengthy bridges at home.

In addition, Maamau’s government will deploy dredgers to suck up vast quantities of sand from lagoon floors and dump it along exposed island coasts, not just for protection but also to build up more land for planting crops.

This is a short-term low-cost solution, but one likely to prove sustainable for only a few decades at most, given the expected increases in prolonged island inundation in this region.

It would be a tragedy if Pacific Island countries, their people and their cultures, became lost a century or more from now.

But as the pandemic has reminded us, we in developed countries are much like the people of the atolls: we’re living on the edge and want to believe life is indefinitely sustainable where we are. The truth is, we have to adjust to survive.