The events of the past few days in Western Australia have been extraordinary as the protracted conflict between the government and mining billionaire Clive Palmer reached a fever pitch.

Premier Mark McGowan declared the state is “in a war” with Palmer, and, in turn, Palmer has called for the premier to be jailed.

While this war of words has become a feature of their ongoing dispute over the WA border closures, these comments are related to an entirely different disagreement — a legal battle Palmer is waging against the state, reported to be worth A$30 billion. But Palmer told reporters this week:

There isn’t any $30 billion claim against the Western Australian government […] It’s [their] assessment of what the damages are for what they’ve done.

In essence, the government is seeking to legislate its way out of a legal dispute. There is no doubt that having to pay a potential $30 billion damages claim would be devastating for WA. But trying to circumvent the courts by instead legislating a preferred outcome is also not without its consequences.

What is the current dispute about?

Late Tuesday, Attorney-General John Quigley introduced the bill and informed parliament the state was facing the massive damages claim related to the dispute with Palmer.

The dispute stretches back to 2012 and has a complicated history, including both arbitral awards and a Supreme Court decision in Palmer’s favour. It was recently listed for a 15-day arbitration hearing due to commence in November.

While WA has vigorously defended its legal position, Quigley acknowledged “a successful defence of the claim is not guaranteed”.

McGowan also warned losing the case would bankrupt the state and

would mean mass closures of hospitals, of schools, of police stations, mass sackings of public servants and child protection workers.

The bill was designed to prevent this outcome. And just two days later, it passed into law with the support of both government and opposition members. 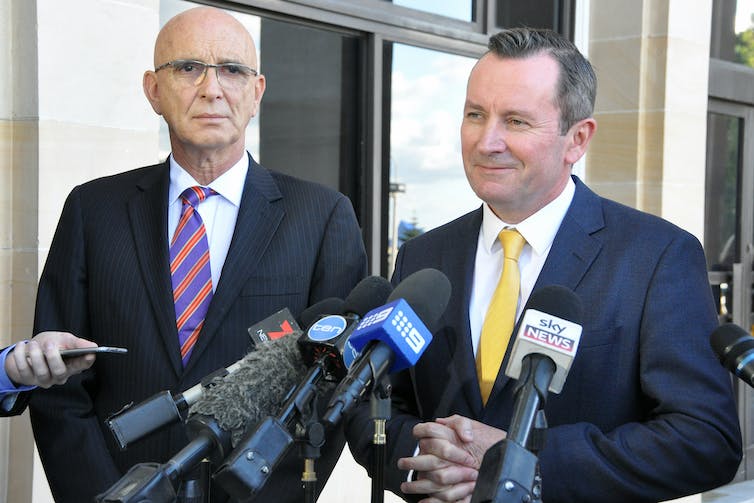 McGowan (right) and Quigley have issued dire warnings about the impact Palmer’s lawsuit could have on the state. REBECCA GREDLEY/AAP

What does the new law do?

Quigley has acknowledged this new law is unprecedented. It is directly and expressly targeting Palmer, his mining company Mineralogy Pty Ltd, and the ongoing dispute over the Balmoral South iron ore project.

It terminates the ongoing arbitration, invalidates existing arbtiration agreements, voids existing arbitral awards, prevents further legal proceedings or appeals, protects the state from any liability of any sort in relation to the dispute (including any criminal liability), and obliges Palmer and his companies to indemnify the state.

The rules of natural justice and freedom of information laws are expressly stated not to apply.

There are a number of concerns with the government’s actions. First, this approach undermines both the rule of law and separation of powers, which are foundational pillars of our Westminster system of government.

It also creates sovereign risk. The premier has sought to downplay this by reassuring the resources sector this is a one-time-only exceptional case.

But how could it realistically not change the risk calculation made by potential investors? If the government shows it is prepared to intervene in this way once, how could anybody be 100% sure that they wouldn’t be prepared to do it again?

Another concern is the singling out of Palmer by the law. While he is clearly a wildly unpopular figure in WA and an enthusiastic litigant, drafting specific laws to target named individuals is never a good idea and undermines the principle of equality before the law.

Laws should not be drafted to target specific individuals, no matter who they are.

The fact that such extraordinary legislation has been rushed into the parliament with no prior consultation or warning, and passed with only two days of debate is also concerning.

The government rejected a proposal to have the legislation considered in more detail by a parliamentary committee, even if done within an expedited timeframe. Quigley claimed

there is too much at risk for all Western Australians for namby-pamby inquiries.

While the premier has claimed the urgency was necessary given the unique circumstances, it means an extraordinary law that negates foundational Westminster principles has been passed with minimal scrutiny or debate.

The significance of this is perhaps best captured by comments made by McGowan himself in 2013. The view from opposition gave him a somewhat different perspective:

It has been part of the standing orders and the time-honoured process of parliament in the Westminster system for a long period that we do not rush legislation through without time to consider it because doing so does not allow proper debate in its consideration and mistakes are made in the legislation.

The unprecedented nature of this particular law must surely amplify these concerns.

Palmer has already indicated he will challenge the validity of the new law in the High Court. He has also taken steps in the past two days to try to prevent the law from taking effect by registering the existing arbitral awards in the Queensland Supreme Court and applying for an injunction in the Federal Court.

While the WA government has tried to remove the dispute from the courts, it now looks as though the matter will end up in court one way or another — and the legal fight will likely be protracted.

By trying to legislate itself a win in this legal dispute, the government has tried to place itself above the law. This may or may not end up saving WA from a catastrophic damages claim.

But there is still a significant cost in the collateral damage that has been done to the rule of law.