According to a formal measure of language simplicity, United States President Donald Trump’s acceptance speech at this year’s Republican National Convention was far more complex than challenger Joe Biden’s at the Democratic Convention.

While Biden’s speech could be understood by a fifth grader, Trump’s required an eighth-grade level of education.

Surprised? After years of stories about how Trump uses much simpler language than his rivals, you should be.

During the last campaign, we read numerous accounts of how Trump’s language was pitched low — at a child’s level.

Or, as The Boston Globe gleefully proclaimed, his 2015 announcement speech “could have been comprehended by a fourth-grader”. By contrast, the announcement speeches of other candidates, such as Hillary Clinton, Ted Cruz and Marco Rubio scored several grades higher.

Those reports were easily believable to experts. Trump is a right-wing populist and academics have long asserted populist leaders use simple language in order to appear close to the “common people” and distance themselves from linguistically convoluted elites.

But as our new research shows, when you look at a comprehensive sample of populist leaders’ speeches, this is not always the case.

Researching the simplicity of leaders’ language

To investigate whether right-wing populists in different countries really do use simpler language than mainstream ones, we assembled a database of more than one million words. This was made up of speeches by populist leaders and their non-populist opponents in the United States, Italy, France, and the United Kingdom.

Looking at the simplicity of a single text, as the media had done with Trump’s 2015 announcement speech, makes for a good headline, but you need far more than that to make sound judgements about someone’s language. 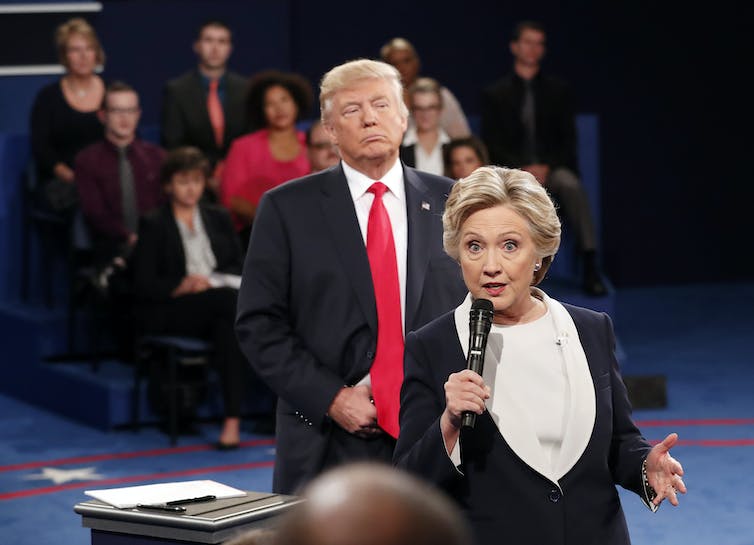 A detailed analysis showed Donald Trump’s language was only slightly more ‘simple’ than that of his former challenger, Hillary Clinton. Rick T Wilking/AP

For each populist and non-populist leader, we analysed at least 100,000 words (per leader) from their speeches over a given period of time, using an array of measures for evaluating linguistic simplicity.

These included Flesch-Kincaid Grade Level and Readability Tests for English, along with similar scales for Italian and French. Using these measures to assess simplicity is based on the idea that, the greater the presence of shorter words and sentences, the easier a text is to understand.

Our right-wing populists were the most prominent ones from their respective countries over the past decade: Trump, Matteo Salvini (leader of the League, one of Italy’s major parties), Nigel Farage (former leader of the UK Independence Party), and Marine Le Pen (France’s far-right presidential candidate).

Read more: Trump has changed America by making everything about politics, and politics all about himself

The mainstream leaders we used for comparison were their key opponents. For Trump and Le Pen, we chose their principal rivals in the last presidential campaigns, Clinton and French President Emmanuel Macron. In the UK and Italy, we compared Farage and Salvini to the main centre-right and centre-left leaders in those countries during the 2014-2016 period.

Our results were not what we expected.

First, the gap between Trump and Clinton in the 2016 campaign was actually not very wide. Trump’s speeches were pitched at a level comprehensible to a sixth grader, while Clinton’s required a seventh-grade level of education. On our other measures, there was little difference between the two.

In Italy, UK, and France, the results were even more surprising.

In Italy, the college dropout Salvini was only simpler on one of our measures than his opponents, law graduates, Democratic Party leader Matteo Renzi and New Center-Right leader Angelino Alfano.

Read more: Has the coronavirus proved a crisis too far for Europe's far-right outsiders?

In the United Kingdom, it was Oxford graduate and then Labour Party leader Ed Miliband who came out simplest, not Farage. The main reason for Farage’s greater complexity was the length of his sentences compared to both Miliband and former prime minister and Conservative Party leader, David Cameron. While Miliband’s sentences were on average 13.99 words long, and Cameron’s 15.49, Farage’s were a remarkable 24.61.

Meanwhile, in France, we found Le Pen consistently used much more complex language than the product of France’s elite Ecole Nationale d'Administration, Macron. According to the Kandel and Moles index for assessing the simplicity of French, Le Pen’s speeches were rated “difficult”, while Macron’s were “standard”. Her language was also significantly more complex according to all our other measures.

Why do populist leaders use more complex language?

How do we explain these counterintuitive results?

One possibility is that, since studies have shown the language of mainstream political leaders in countries like the US and Italy has become simpler over time, it could be that the gap between elite and populist language has reduced, thus making claims about greater populist simplicity outdated.

In other words, perhaps mainstream leaders like Clinton and Biden have moved closer to the populist Trump’s level (and sometimes even below).

Another, related, possibility is that, at the same time as mainstream politicians have followed the advice of professional communications advisers and reduced the complexity of their speeches, right-wing populists in some countries have instead chosen to appear less coached and more authentic. 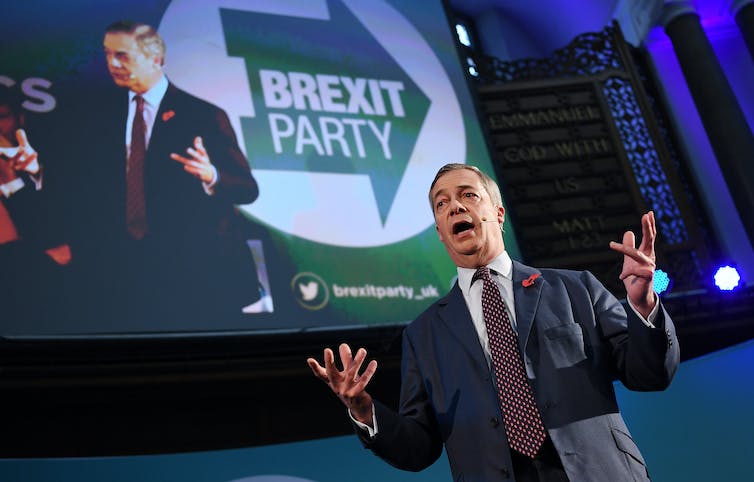 For example, Farage’s long rambling sentences make his language more complex, but also add to his “man holding court in the pub” image. Similarly, as a French nationalist who opposes globalisation and its alleged cultural homogenising effects, Le Pen may see an advantage in not imitating English-speaking political language trends that, by contrast, Macron has embraced.

Opting for national rhetorical traditions as opposed to slogan-based communication techniques derived from the US model might thus be useful for right-wing populist leaders in Europe.

If right-wing populists do not necessarily use simpler language than their mainstream opponents, it begs the question: why were we so easily convinced they do?

Perhaps the answer is many of us like to think right-wing populists speak like fourth graders and their “deplorable” supporters lap it up. It fits our biases to believe populists like Trump are successful because they cynically deliver their message in much simpler language than mainstream politicians like Biden.

Our research shows, however, despite this convenient and even comforting idea, the reality is much more complex.