Yet in Motorcycles — Design, Art, Desire, this summer’s blockbuster exhibition at Queensland Art Gallery of Modern Art (QAGoMA), there is a mean red motorcycle that was ridden by the fastest Australian woman on two wheels, Kim Krebs.

How fast did she go? The numbers are hard to get your head around: 244 miles per hour. That’s miles. In kilometres that is a tick under 400 per hour. Think of the legal limit you can drive along the highway and multiply it by four … and she is still attempting to go even faster.

Kreb’s record breaking ride is one of a hundred motorcycles in the exhibition, drawn from collections all over the world by curators Charles M. Falco and Ultan Guilfoyle. 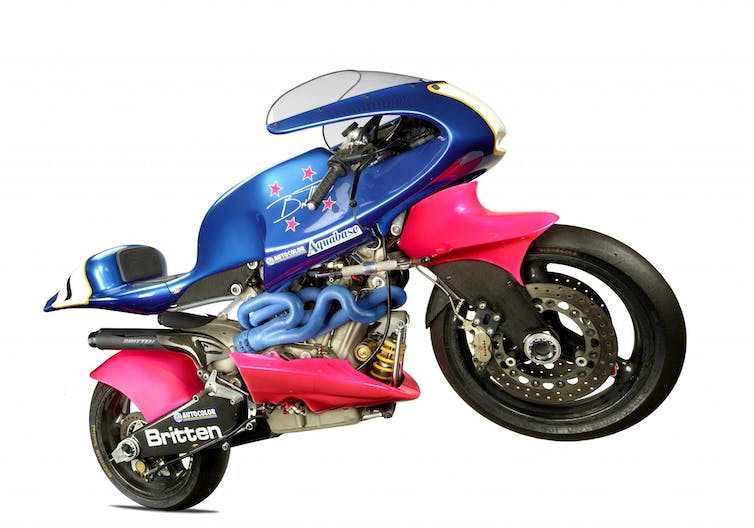 Motorcycles? In an art gallery?

This is a niche category exhibition that follows similar QAGoMA shows such as the fashion house Valentino Retrospective, Past/Present/Future (2010), California Design: Living in a Modern Way (2013-14) and Marvel: Creating the Cinematic Universe in 2017.

The Marvel exhibition drew over a quarter of a million visitors (I confess I had season tickets and still miss seeing Hulkbuster each week) clearly indicating such shows, however singular, have broad appeal.

QAGoMA director Chris Saines says the gallery runs with a broad definition of what constitutes modern culture. Accordingly, people who ordinarily would not visit art galleries beat a path to this one for specialised exhibitions. Niche shows appeal to specific demographics, who have a rusted on dedication to their passion.

With the opening of Queensland’s borders following coronavirus restrictions perfectly coinciding with this exhibition, there will surely be a steady stream of two-wheeled devotees making their way to Brisbane.

But this show will also educate and inform those with an interest in design, modern history, popular culture, and art, who are willing to learn something new, and like me, may start to see motorcycles in a different way. 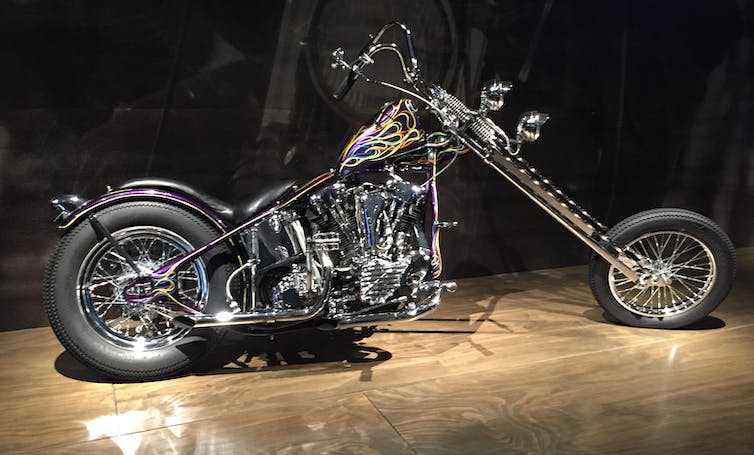 Whose chopper is this? The 1973 Harley Davidson Chopper. Author, Author provided (No reuse)

Read more: What evolution and motorcycles have in common: let's take a ride across Australia

From original steampunk to future motors

Encompassing early models from the Victorian era (bicycles with an engine strapped to them, very steampunk), through the mid-20th century’s chrome muscle machines, to sleek concept bikes of the future powered by electricity, this exhibition covers the motorbike’s 150-year history.

All the big names are here: Norton, Triumph, BSA, Ducati, Honda, Kawasaki. There are also a number of bespoke style designers, including Australia’s Deus Ex Machina, whose ultracool Drover’s Dog (2009) accommodates a surfboard on its side. 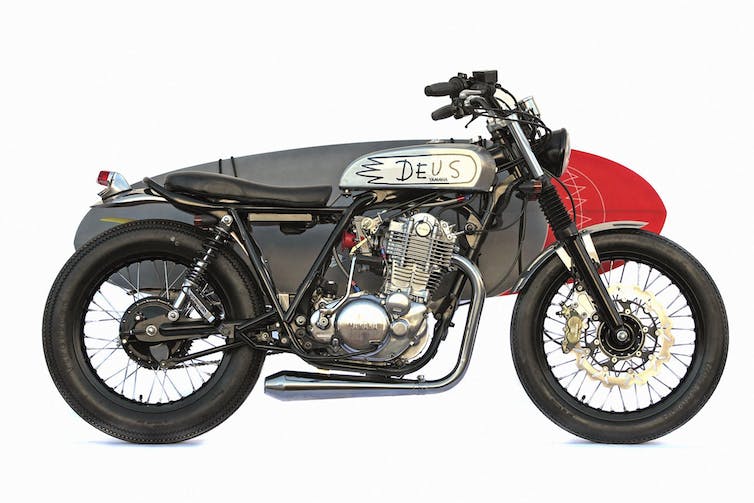 From the road to the surf. The Drover’s Dog (2009) by Deux Ex Machina is an Australian bespoke design. Joseph Mildren/Deus Ex Machina

Exhibition designer Michael O’Sullivan has used the gallery’s expansive ground floor to great effect. The angular architecture reflects and amplifies the stars of the show, setting this exhibition apart from a mere motor show exposition. 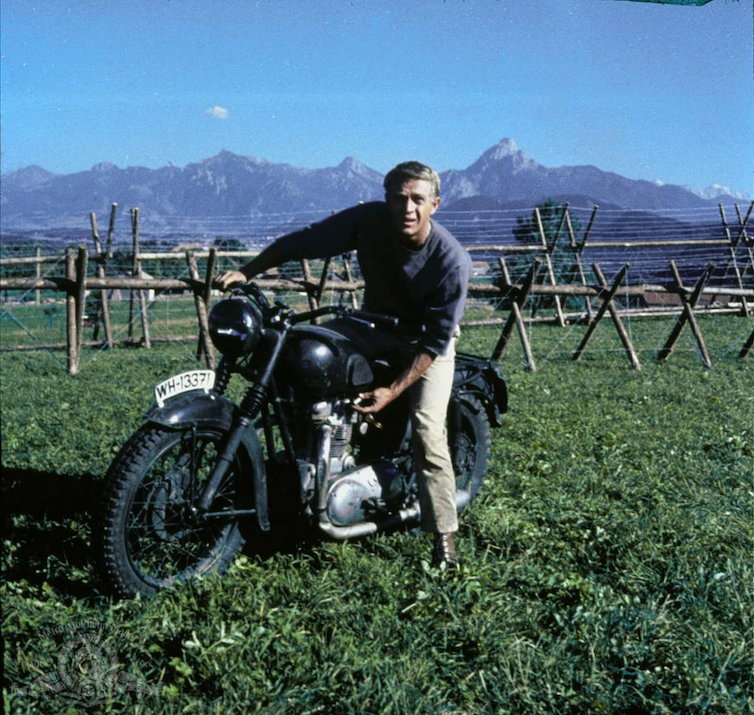 Steve McQueen revs up for his 1963 Great Escape. IMDB

There are of course elements within the design of the motorcycles that reflect fine art values of their era, most notably German Bauhaus and Art Deco influences, when motorcycles morphed from the simple functionality of economical transportation to aesthetically pleasing status symbols.

Read more: Explainer: who owns the copyright to your tattoo?

The oldest known motorcycle, and the first that exhibition visitors see, was developed by Frenchman Louis-Guillaume Perreaux. Steam-powered, the 1871 model had a top speed of 14 kilometres per hour and being mainly made of timber, would not have been a comfortable ride.

Contrast this with the cruiser motorcycles a century later, most notably by Harley-Davidson, when riders reclined on customised bikes, such as the almost impossibly elongated Chopper, just like the one ridden by Dennis Hopper and Peter Fonda in Easy Rider (1969). 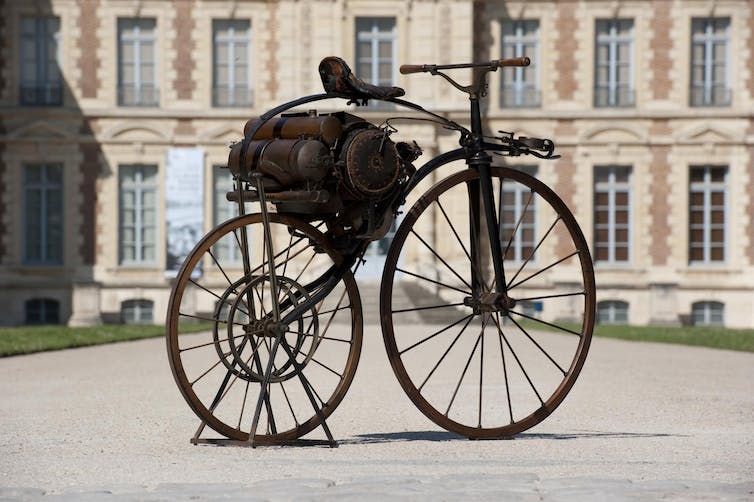 On the eve of the exhibition, land racer Krebs described what it feels like to ride in excess of 200 miles per hour. She spoke of feeling a kind of serenity, as she travels so fast across the salt plains that the roar of her turbo-charged engine is left far behind her.

“What are you aiming for?” a journalist asked her.

“I am aiming for forever”, she replied.

The Motorcycle — Art, Design, Desire is showing at QAGOMA until 26 April 2021.