Tropical Cyclone Seroja battered parts of Western Australia’s coast on Sunday night, badly damaging buildings and leaving thousands of people without power. While the full extent of the damage caused by the Category 3 system is not yet known, the event was unusual.

I specialise in reconstructing long-term natural records of extreme events, and my historic and prehistoric data show cyclones of this intensity rarely travel as far south as this one did. In fact, it has happened only 26 times in the past 5,000 years.

Severe wind gusts hit the towns of Geraldton and Kalbarri – towns not built to withstand such conditions.

Unfortunately, climate change is likely to mean disasters such as Cyclone Seroja will become more intense, and will be seen further south in Australia more often. In this regard, Seroja may be a timely wake-up call.

Cyclone Seroja initially piqued interest because as it developed off WA, it interacted with another tropical low, Cyclone Odette. This rare phenomenon is known as the Fujiwhara Effect.

Cyclone Seroja hit the WA coast between the towns of Kalbarri and Gregory at about 8pm local time on Sunday. According to the Bureau of Meteorology it produced wind gusts up to 170 km/hour.

Seroja then moved inland north of Geraldton, weakening to a category 2 system with wind gusts up to 120 km/hour. It then tracked further east and has since been downgraded to a tropical low.

The cyclone’s southward track was historically unusual. For Geraldton, it was the first Category 2 cyclone impact since 1956. Cyclones that make landfall so far south on the WA coast are usually less intense, for several reasons.

First, intense cyclones draw their energy from warm sea surface temperatures. These temperatures typically become cooler the further south of the tropics you go, depleting a cyclone of its power.

Second, cyclones need relatively low speed winds in the middle to upper troposphere – the part of the atmosphere closest to Earth, where the weather occurs. Higher-speed winds there cause the cyclone to tilt and weaken. In the Australian region, these higher wind speeds are more likely the further south a cyclone travels.

Third, most cyclones make landfall in the northern half of WA where the coast protrudes far into the Indian Ocean. Cyclones here typically form in the Timor Sea and move southward or south-west away from WA before curving southeast, towards the landmass.

For a cyclone to cross the coast south of about Carnarvon, it must travel a considerable distance towards the south-west into the Indian Ocean. This was the case with Seroja – winds steered it away from the WA coast before they weakened, allowing the cyclone to curve back towards land.

My colleagues and I have devised a method to estimate how often and where cyclones make landfall in Australia.

As cyclones approach the coast, they generate storm surge – abnormal sea level rise – and large waves. The surge and waves pick up sand and shells from the beaches and transport them inland, sometimes for several hundred metres.

These materials are deposited into ridges which stand many metres above sea level. By examining these ridges and geologically dating the materials within them, we can determine how often and intense the cyclones have been over thousands of years.

At Shark Bay, just north of where Seroja hit the coast, a series of 26 ridges form a “ridge plain” made entirely of one species of a marine cockle shell (Fragum eragatum). The sand at beaches near the plain are also made entirely of this shell.

The ridge record shows over the past 5,000 years, cyclones of Seroja’s intensity, or higher, have crossed the coast in this region about every 190 years – so about 26 times. Some 14 of these cyclones were more intense than Seroja.

The record shows no Category 5 cyclones have made landfall here over this time. The ridge record prevents us from knowing the frequency of less intense storms. But Bureau of Meteorology cyclone records since the early 1970s shows only a few crossed the coast in this region, and all appear weaker than Seroja. 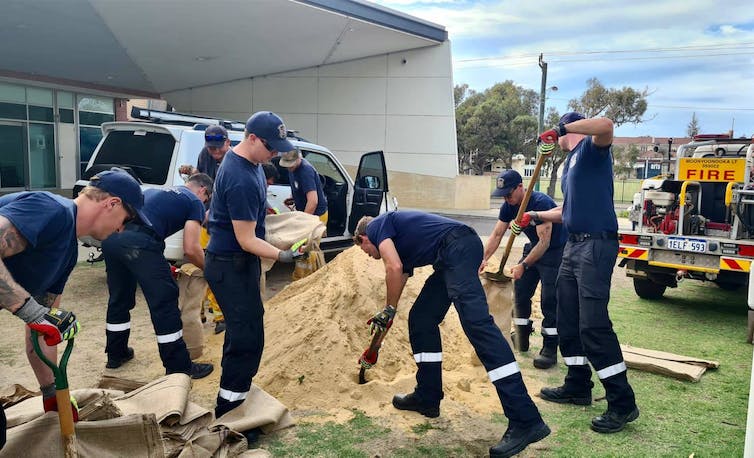 Emergency services crews in the WA town of Geraldton, preparing ahead of the arrival of Tropical Cyclone Seroja - an event rarely seen this far south. Department of Fire and Emergency Services WA

So why does all this matter? Cyclones can kill and injure people, damage homes and infrastructure, cause power and communication outages, contaminate water supplies and more. Often, the most disadvantaged populations are worst affected. It’s important to understand past and future cyclone behaviour, so communities can prepare.

Climate change is expected to alter cyclone patterns. The overall number of tropical cyclones in the Australian region is expected to decrease. But their intensity will likely increase, bringing stronger wind and heavier rain. And they may form further south as the Earth warms and the tropical zone expands poleward.

This may mean cyclones of Seroja’s intensity are likely to become frequent, and communities further south on the WA coast may become more prone to cyclone damage. This has big implications for coastal planning, engineering and disaster management planning.

In particular, it may mean homes further south must be built to cope with stronger winds. Storm surge may also worsen, inundating low-lying coastal land.

Global climate models are developing all the time. As they improve, we will gain a more certain picture of how tropical cyclones will change as the planet warms. But for now, Seroja may be a sign of things to come.

Read more: Wetlands have saved Australia $27 billion in storm damage over the past five decades

This article is part of Conversation series on the nexus between disaster, disadvantage and resilience. Read the rest of the stories here.