Since the fatal Havelock North campylobacter outbreak in 2016, freshwater quality has rightfully been a major political issue in Aotearoa New Zealand.

Pipes bursting in Wellington, lead contamination in Otago and concerns about tolerable levels of nitrates in the country’s drinking water are all signs of a system in...

Since the fatal Havelock North campylobacter outbreak in 2016, freshwater quality has rightfully been a major political issue in Aotearoa New Zealand.

Pipes bursting in Wellington, lead contamination in Otago and concerns about tolerable levels of nitrates in the country’s drinking water are all signs of a system in crisis.

Ultimately, our use of and access to freshwater resources come down to how they are managed. To that end, the government is working on big changes to freshwater governance structures.

But while local control has clearly not been ideal, water policies developed by central government have also been inadequate. As was recently reported, the working group studying nitrates in freshwater met only twice in 18 months and was recently disbanded.

The Ministry for Primary Industries opposed the introduction of stricter nitrogen levels in rivers because of the potential economic impact on agriculture and horticulture.

Given access to clean water is a fundamental human right and the majority of New Zealanders would benefit from cleaner water, we have to ask: how democratic are New Zealand’s water policies? 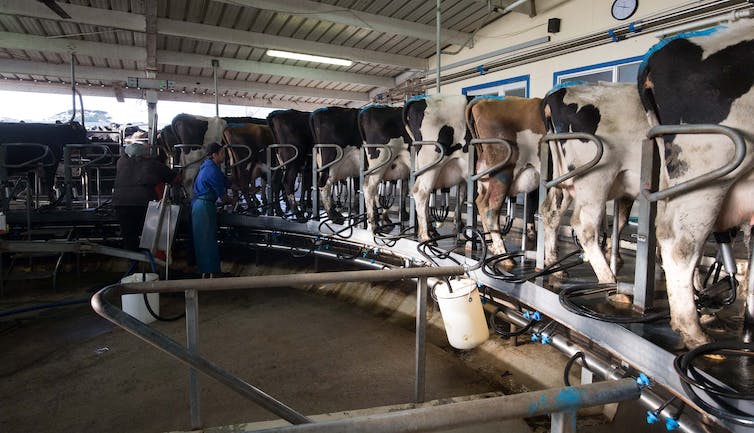 Agriculture such as dairy farming has an impact on water quality but the public has little say in environmental policy-making. GettyImages

While the primary industry sector undeniably plays a key role in New Zealand’s economy (5-7% of GDP for agriculture), its true contribution might look quite different if environmental impacts – and freshwater quality in particular – were taken into account.

Currently, New Zealand taxpayers shoulder the heavy cost of lax oversight and regulation of freshwater. While the public is aware of the issue of freshwater quality, arguably there is less awareness of the democratic deficit contributing to the problem.

In a liberal representative democracy such as New Zealand’s, political decisions result from elections. The three-yearly electoral cycle, however, tends to encourage symbolic politics geared towards winning votes rather than generating long-term solutions to complex problems like freshwater quality.

In 2017, for example, Labour campaigned on cleaning up our waterways. Its eventual plan, “Essential Freshwater: Healthy Water, Fairly Allocated”, appeared promising but is ambiguous and short on detail or substance. Some of the promised reforms have since been delayed.

With no real mechanism for public participation beyond the next general election or non-binding public consultation and submission processes, New Zealanders are left largely powerless.

A vote for the National opposition would only exacerbate the problem, given the party has said Labour’s proposed freshwater standards would be “gone by lunchtime” if it was elected.

So far, the Three Waters proposal to centralise responsibility for water services seems unlikely to increase opportunities for public participation in policy formation.

For all these reasons, we argue that by first improving our democratic system we can then begin to solve environmental problems such as freshwater quality.

Effective alternatives already exist but these require challenging the assumption that democracy is synonymous with elections.

The first step would be to reinvigorate democracy at the local level. Although many important environmental decisions are made locally, public participation in local body elections remains very low in Aotearoa New Zealand.

Enabling the public to play a key role in a real, participatory process could change this. It might also counter the tendency for local government to be captured by vocal, self-selecting, minority interest groups.

One way of achieving that is through a system known as “sortition”. This involves selecting representative assemblies by lottery instead of election or appointment. This model has two main goals: genuine representation and informed public input.

Assemblies are randomly selected from the population and then filtered to create a microcosm of the community in terms of age, gender, ethnicity, location, socio-economic status and even attitudinal bias.

The case for ‘sortition’

Unlike referendums, sortition emphasises quality over quantity. The selected citizens deliberate with experts to reach informed conclusions. The outcome of this deliberative process is then used to guide policy-making.

These deliberative assemblies can be temporary and focused on specific issues, or they can be embedded as permanent mechanisms within the institutions of a territorial or state authority. Remuneration is sometimes offered as an incentive to participate.

Sortition is becoming increasingly popular around the world as a potential remedy for “democratic fatigue” and populist politics. In Utrecht in the Netherlands, for example, sortition was used to design the city’s energy plan.

Improved local democracy would increase public trust in political institutions in general. But it might also lead to more practical, equitable solutions to problems that directly affect citizens — such as the quality of their water.