Often when historians visit an archive or conduct research, we are not sure what we’ll find. With the help of archivists and librarians, we may know broadly what is contained in an archival record or a database, but we never know what may or may not be useful to us. Approaching our research material with a particular set of questions or analytical framework, what we actually find may leave us surprised, confused or taken aback in another way.

On Twitter, I asked a simple question: Historians, what is the thing that made you go ‘wait, wut?’ in the archives or in your research? The response was overwhelming – over 300 replies and 450 quote tweets at last count.

Historians, archivists and other researchers got in touch with great stories of their archival finds and tales of bizarre research moments. These ranged from the quirky to the disturbing to the profound.

Below I have chosen a handful that fall into each category to give an idea of the wide spectrum of what historians have come across in the field.

Many of those who responded told stories of bizarre (and sometimes amusing) finds in the archives. Some were actual objects, such as Robert Cribb finding “17 tubes of processed opium, ready for smoking, in the Dutch archives from 1946 Indonesia”, Daniel McKay coming across “negatives of an early Australian prime minister naked on holiday”, and “300 love letters from woman to woman around 1760, partly written in blood”, located by Susanne Wosnitzka.

Twitter Others found interesting correspondence. A.J. Bauer gave the example of transcripts of phone-sex calls in the Ronald Reagan Presidential Library, after a politician wrote to Reagan to intervene against “dial-a-porn”. Yasmin Dualeh uncovered a “letter from Prof Phillip Hitti calling out his Princeton colleague Albert Einstein for spreading false rumours about him to students”. Maurice Casey told of a letter written to Soviet leader Josef Stalin by a New York University debating team “seeking help with their upcoming debate on capitalism”. More strange tales emerged from newspaper reports and transcripts of speeches that historians discovered in their research. Xesc Mainzer mentioned a 1970s story in a Majorcan newspaper of “an elderly Belgian woman loosing [sic] her denture when she bit a policeman’s leg”. In the Gerald Ford Presidential Library and Museum, Dustin Jones “came across a speech given by John Wayne at a charity dinner Ford also attended making absolutely one of the least accurate predictions I saw in my studies”. What was the movie actor’s prediction? That “Watergate will be a footnote” in future history books. 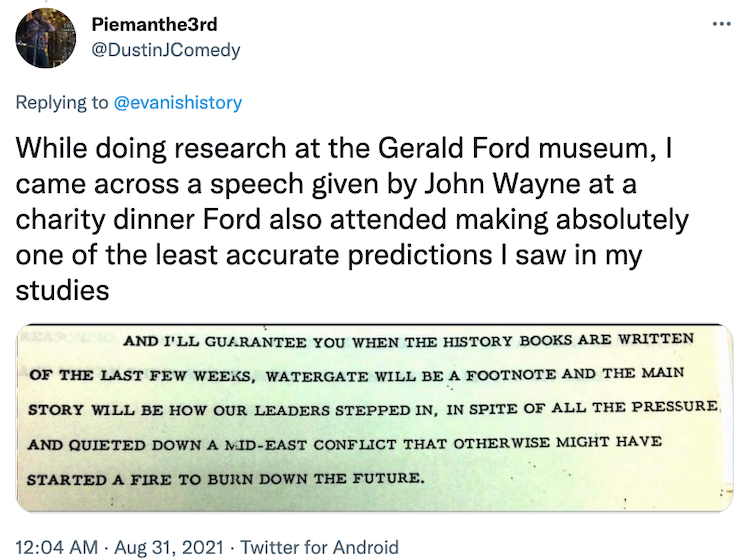 Twitter The disturbing Historians also attested to the disturbing material that astounded them in their research, with the often bureaucratic and sterile nature of archival documents belying the troubling matter unearthed. Lachlan Clohesy found notes of a talk by British nuclear physicist Sir Ernest Titterton about Australia’s potential nuclear arsenal. This talk “included making the point that if we had nuclear weapons, the cost of killing per man, woman and child would be cheaper than conventional warfare”. Clohesy added that Titterton’s notes included the actual prices.

Twitter On a similar topic, Stephen Schwartz found that US Army Lieutenant General James M. Gavin had told Congress in 1957 that to win a nuclear war, the United States would need 151,000 nuclear weapons. Also on the topic of calculating deaths, Pépé Roswaldy came across a Dutch colonial magazine promoting native land resettlement in Indonesia in the 1930s (which resulted in a number of deaths) and reporting an officer as saying: “The death number is just okay, nothing unusual.” There were also more gruesome discoveries. Gabe Moshenska told of finding a description by famous Egyptologist Sir John Gardner Wilkinson of “his own diseased penis” in the papers of Thomas Pettigrew at Yale. Narrelle Morris mentioned an encounter in the National Archives of Australia with “a rusty razor that a Japanese suspected war criminal tried to commit suicide with”, stating: “I drew it to the archivist’s attention.” 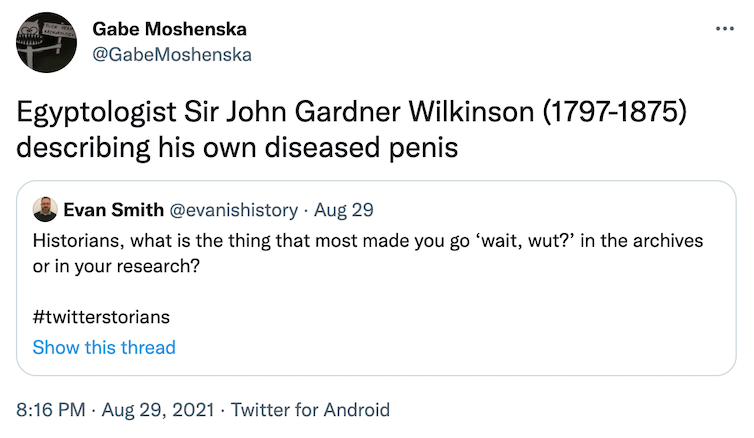 Screen Shot at pm. Twitter The profound There were also the surprising finds that were of particular importance to the historians and to our understanding of the past. Becky Erbelding from the United States Holocaust Memorial Museum came across the only known photos of Nazi doctor Josef Mengele at Auschwitz-Birkenau, when a photo album was sent to the museum. Peter Job told of a document that Indonesian intelligence provided to an Australian diplomat in Jakarta in 1975. This document, Job explains, was a list of members of Fretilin, the East Timorese independence group, to be targeted after an Indonesian invasion. Job argues that this “[s]hows level of pre-invasion complicity” by Australia. 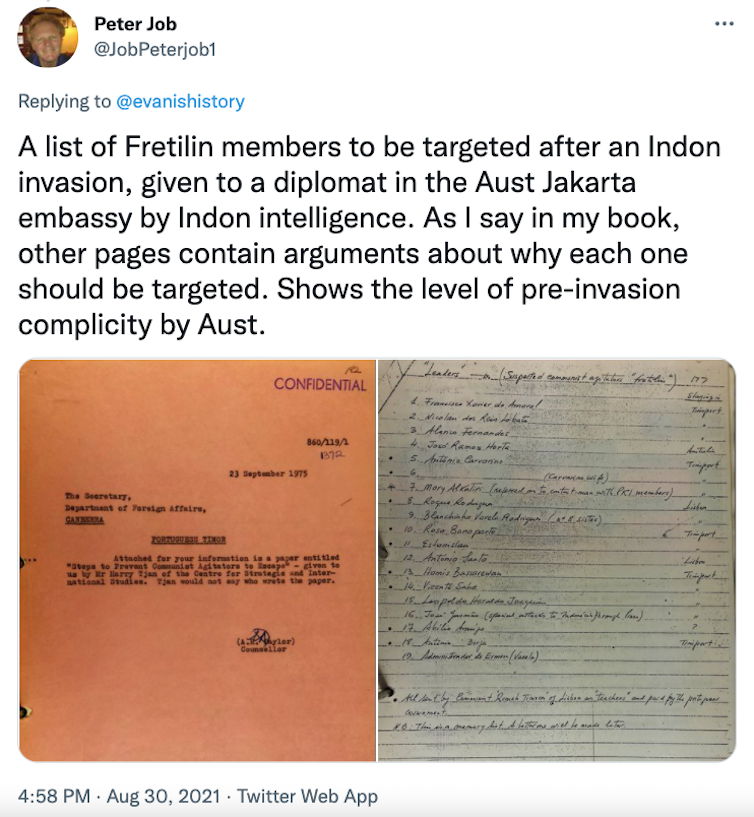 Twitter For Adam Rothman, it was an 1866 US Senate report on “rumors that newly freed people in the US were being kidnapped and sold into slavery in Cuba and Brazil”. This led to Rothman writing a whole book based on this realisation. Other historians also revealed that a chance find led them to new research projects. For example, Anna Hájková heard of a story of a forced relationship between a German women’s guard and a young female prisoner during the final year of the second world war. Intrigued by a tale from an oral history recording, Hájková developed this story into a ground-breaking work of queer history. These are only a few of the many stories that people revealed in reply to my tweet. As we do research into the past, historians are often confronted or surprised by what we come across. Some findings can be amusing titbits on the side of our research. Others greatly shift our knowledge of certain events or people. Nearly every historian has a story of a research find that made them pause and, via Twitter, we were able to hear of so many.