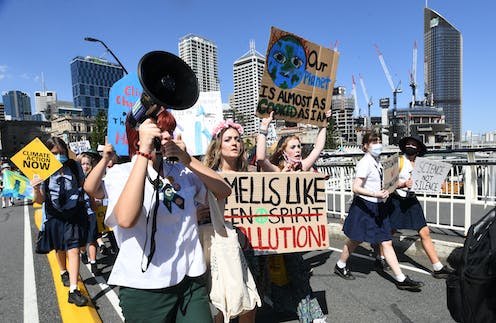 Between 2019 and early 2021, we developed a research proposal asking for funding from the Australian Research Council (ARC). The project was to investigate the mass student climate action movement and its relationship to democracy.

A few weeks ago, on Christmas Eve, we learnt via Twitter that the ARC had recommended our research proposal for funding, but acting Education Minister Stuart Robert vetoed the recommendation.

Robert also vetoed five other humanities projects. He did so on the grounds they “do not demonstrate value for taxpayers’ money nor contribute to the national interest”.

This political intervention is a problem for many reasons. Chief among them, it breaches key principles of academic autonomy and – in our case, also silences research working with young people on a crucial policy issue.

‘Freedom in research and training’

Since 1988, almost 1,000 universities in 94 countries have signed the Magna Charta Universitatum, including ten from Australia. The charter affirms the deepest values of university traditions.

In practice, it means a university “must serve society as a whole” and that “to meet the needs of the world around it, its research and teaching must be intellectually independent of all political authority and economic power”.

Central to the charter is that “freedom in research and training is the fundamental principle of university life”.

The ARC administers the National Competitive Grants Program, which delivers around $800 million to Australian researchers each year.

The ARC grants process involves several rounds of rigorous review and assessment, by internationally leading scholars. The ARC then recommends to the education minister which proposals should be funded, and the budget. The minister makes the final funding decisions.

The Morrison government claims it wants to protect academic freedoms. And it commissioned a 2019 review of freedom of expression and intellectual inquiry in higher education.

However, Robert’s veto of the ARC’s decision to fund six projects is a clear breach of the core principle of academic freedom.

What’s more, it’s not the first time Morrison government education ministers have ridden roughshod over the funding processes of the ARC and university research.

The project we proposed for ARC funding was titled “New possibilities: student climate action and democratic renewal”. It involved working directly with young people to investigate a significant new phenomenon.

Since 2018, millions of students across the globe have worked hard as leaders, organisers and advocates for action on climate change. Their actions include the school strikes for climate and various legal actions. In Australia since 2018, we estimate at least 500,000 school students have participated in the movement, including coordinated school strike actions online and in the streets.

Our project was designed to document such actions and to establish:

Read more: Seriously ugly: here's how Australia will look if the world heats by 3°C this century

Our project would have led to vital new knowledge on a global phenomenon. It had the potential to help address falling trust in governments and dissatisfaction with democracy, and to give new insights on engaging with young people in learning about and responding to climate change.

Our proposal relied on a vast body of academic work and expertise, and previous scholarship by the research team. It was connected to a global research network exploring young people’s climate politics and broader possibilities for democracy.

Developing the proposal involved hundreds of hours of additional research, writing, editing and consultation with professional staff across five universities.

For the ARC to judge the project worthy of funding, it must have determined it passed the national interest test and that it was value for money.

Significantly, we have no formal right to appeal the decision.

The project aimed to learn more about the student climate movement. James Ross/AAP

The minister’s intervention is a serious blow to Australia’s reputation for research excellence and its commitment to academic freedom.

The Morrison government has also sent a negative message to Australia’s young people – essentially saying research into their views on climate change is irrelevant.

We asked students who we work with to respond to the government’s veto, and they stand with us in disappointment and disbelief. Audrey, aged 10, who has participated in climate action, said:

“I personally think that the vetoing was to stop the research from public view to make the government look better, as they aren’t doing enough on climate change. Another main reason why the vetoing is so bad and unfair is that the government is sending the message that young people’s views aren’t important to both young people and the community.”

Urgent change is needed to ensure academic autonomy, freedom, and independence of process are not subject to political interference in future.

Addressing urgent and complex problems such as climate change involves research across the full spectrum of society – and that includes Australia’s young people.