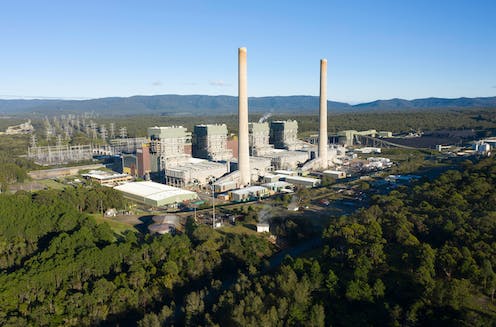 Eraring has been operating for 35 years in the central coast of New South Wales. Last year, it alone was responsible for around 2% of Australia’s greenhouse gas emissions, based on calculations from electricity market and emissions data.

The fundamental reason for its early closure is the brutal impact the growth of renewable energy is having on the profitability of coal plants. Origin has announced it will be building a large, 700 megawatt battery on-site in its place to store renewable energy.

This announcement follows the acceleration of other major coal plant closures: Liddell power station is scheduled to close in 2023, Yallourn’s closure was brought forward to 2028, and only last week AGL Energy edged forwards the scheduled closure of two more coal plants.

This is a welcome step with transition planning by Origin – but also underlines the risks of Australia’s clean energy transition accelerating without a national plan for the exit of coal.

Old power stations are excellent sites for batteries due to their existing connections to transmission lines and lots of electricity capacity. This has also been announced for the closed Hazelwood and Wallerawang coal power stations.

Over the past 12 months, the market share of renewable energy has increased to over 30%. In particular, the rapid growth of rooftop solar and solar farms in the middle of the day has sent daytime wholesale electricity prices crashing.

To stay open, coal plants are using a variety of coping strategies. This includes cycling their output down on sunny days and ramping back up for higher prices as the sun sets and demand increases at the end of the day. However, this places stress on ageing plants and breakdowns are becoming more common.

Something has to give. Electricity market analysis last year found Eraring was the coal plant most exposed to the growth of renewable energy and likely to lose significant money by 2025 – so the writing was on the wall for Eraring.

the reality is the economics of coal-fired power stations are being put under increasing, unsustainable pressure by cleaner and lower-cost generation, including solar, wind and batteries.

In announcing the closure, Origin also cited its commitment to net-zero emissions by 2050, and the recommendation of the International Energy Agency that advanced economies close coal plants by 2030.

What will happen to the market and workforce?

When the Hazelwood coal power station closed in 2017 with just a few months notice, power prices spiked for several years afterwards and many workers were unable to find alternative work.

Origin, however, has given three-years notice in accordance with electricity market rules brought in after the shockwaves from Hazelwood’s closure, and announced it will develop a transition plan for its workforce. This includes training, redeployment and prioritising site employees for long-term operational roles.

Origin presented figures showing the energy and capacity gap will be filled by a combination of new storage, Snowy 2.0, a new transmission line to move power between South Australia and NSW, and new renewable energy infrastructure scheduled for NSW.

Consequently, the impact on prices is likely to be modest compared to the Hazelwood closure.

When Hazelwood Power Station closed in 2017, workers hung their hard hats on the gate. Shutterstock

Eraring’s closure may provide other coal plants some breathing space. Coal plant owners have effectively been playing a game of chicken, holding on and hoping another plant shuts to tighten supply and increase prices.

But as Origin’s figures illustrate, there’s a lot more renewable energy projects in the pipeline, and its figures don’t include the tremendous growth of rooftop solar, which last year saw over 3,000 megawatts installed.

So this is unlikely to be the last of the coal plant closures in our near future. Indeed, in the draft 2022 Integrated System Plan (a “roadmap” for the electricity system), the Australian Energy Market Operator projects as much as 60% of coal plant capacity could be gone by 2030.

We still don’t have an exit plan for coal

Even though coal plants are shutting up shop faster, Australia still doesn’t have an exit plan for coal. That’s unlikely to change, given neither major party is going to want to “own” the closures in an election year.

As a result, this pattern seems likely to continue: renewable energy will continue to grow as the cheapest form of electricity generation, governments will put in place policies to accelerate its growth, and it will be left to the market and asset owners to make decisions on closures without a policy framework. This is extremely risky.

Origin has done the right thing by giving three-years notice, committing to a transition plan for its workforce and investing in battery storage.

Read more: The end of coal is coming 3 times faster than expected. Governments must accept it and urgently support a 'just transition'

But energy market players don’t consider the penalties for not complying with notice requirements an effective deterrent, compared to the financial incentive to hang on and hope for a price uplift when other plants close.

This means we’re left relying on the owner’s goodwill, enlightened self-interest and fear of reputational damage to act responsibly.

Maybe Australia will muddle through like this. But without a plan, we’re at risk of a rush of closures in future years with disastrous impacts on electricity prices, regional economies and livelihoods in coal communities.

A variety of models for an orderly exit from coal have been proposed and national agreements have been negotiated to phase out coal in other nations such as Germany and Spain.

While the Australian Energy Market Operator has noted there are technical challenges in the clean energy transition, it considers they can be addressed. There’s no lack of alternative generation and storage to fill the energy gap from retiring coal plants.

Read more: How Australia can phase out coal power while maintaining energy security

Just this week, the NSW government received expressions of interest from renewable energy and storage projects worth over A$100 billion. The government observed that this was equivalent to the electricity output of ten coal-fired power stations in the Hunter Valley Renewable Energy Zone.

Hopefully on the other side of the election there’ll be a political and policy commitment to an orderly exit from coal - a plan that can manage impacts on our electricity system and support coal power station workers through the inevitable transition.