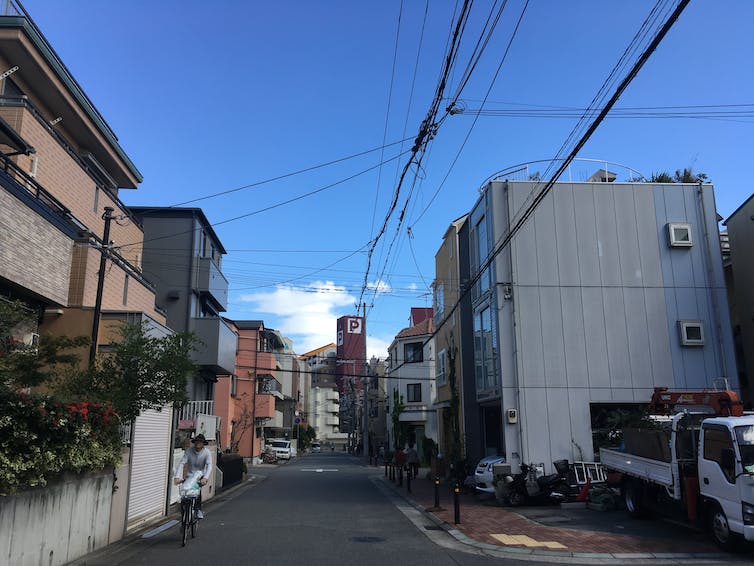 In the popular Japanese TV series Old Enough, very young children are sent out into their neighbourhood on their first solo errand. The release of this long-running series on Netflix this year created a buzz among Western viewers about children travelling around their neighbourhoods on their own when only two to four years old.

Some viewers felt it would be challenging, if not impossible, in their own neighbourhoods to give children such liberty. Many expressed longing for a time when children in their countries had similar freedoms.

Old Enough is an eye-opener for viewers outside Japan.

Another popular TV show, Bluey, depicts the realities of children’s transport in Australia today. The family’s young children are mostly seen travelling in the back seats of their parents’ 4x4s, roaming only houses or childcare centres.

In one episode, the father recalls a time when at age 10 he and his peers roamed freely on BMX bikes around a holiday town. His children are shocked that he walked alone to a campsite shower block (“hey, it was the 80s!”).

The contrasts with Japan raise the question: how can we rethink our cities so children can once again get around safely on their own and benefit from diverse neighbourhood experiences?

Read more: Everyone loves Bandit from Bluey – but is he a lovable larrikin, or just a bad dad?

The cultures and policies are different

For decades in Japan, roughly 98% of children have walked or cycled to and from school. Even kindergarten kids manage the trip on their own. Children’s levels of independent mobility are among the highest in the world.

The social practice of “first errands” gently initiates children into community participation. In Old Enough, community members keep an eye on the children and help them along the way as they complete their errands. The youngsters develop confidence to navigate their local neighbourhoods.

Beyond personal and community values, what changes might make this possible for our own children? Our research on Japanese and Australian cities explores multiple factors that make cities child-friendly.

In many Japanese cities – though not all – urban policies support low-traffic neighbourhoods with people-centred streets. People can walk to nearby shops and services because mixed-use zoning creates a neighbourhood blend of housing, retail and public services, while transit-oriented design means communities are built around public transport hubs.

Read more: Five lessons from Tokyo, a city of 38m people, for Australia, a nation of 24m

Most buildings are exempt from minimum parking regulations and many homes and businesses have no parking. They lease nearby off-street spaces if needed. Parking lots in cities like Tokyo are typically small (the size of one housing plot or less) and some use space-efficient car-stacking technology.

Read more: Empty car parks everywhere, but nowhere to park. How cities can do better

Because of these policies, many Japanese urban neighbourhoods function like “superblocks”. Most car traffic and parking is around main roads. Inner-neighbourhood streets have very low speed limits (often around 20km/h) and are relatively car-free.

Cars are “guests” passing through neighbourhoods that belong to walkers and cyclists. Drivers give way to pedestrians, including the little ones in Old Enough, when they raise a hand (or flag made by their parents) to cross the road.

Parking space numbers within 800m of a rail station in a neighbourhood in Nakano, Tokyo. Largest facilities are near transport corridors. Dark blue points are usually residential parking spaces (only collected in northern half of study area). Source: PhD work by Rebecca Clements, Author provided

Read more: Superblocks are transforming Barcelona. They might work in Australian cities too

Our streets were once the domain of children

Australian children had similar freedoms before we became a car-based society. In the early 20th century, children as young as four were able to venture out on their own.

While children’s ability to get about on their own in their local neighbourhood varies widely by country, in Australia independent mobility has plummeted in only a generation or two. What parents once did unthinkingly, their children now cannot contemplate.

Only about 20% of children were driven to school in the 1970s. By 2003, it was nearly 70%. Australia’s overall rates of walking and cycling to and from school haven’t improved since then.

School drop-off chaos is a recent phenomenon. Common reasons given by parents include increased distances to school and other destinations, and fears of abduction or even others’ judgments. Escorting children on their travels is often seen as solely the responsibility of parents, and not the community as in Japan.

While risks to children are real, perceptions of risks and of who is responsible for children’s safety reshape places and lives. The priority given to car traffic and street parking has led to cities being redesigned to accommodate cars rather than children and their needs.

When cars first appeared in American (and Australian) cities, the street was seen as the domain of children. Planning decisions of that time made now-surprising references to children having a right to public space, protected from:

“[…] the occupation, by moving and parked automobiles, of larger portions of the streets, thus detracting from their safety and depriving children of the privilege of quiet and open spaces for play”.

Since then, zoning, road rules and even responses to unsafe roads such as playgrounds have deprived children of the freedom to experience their neighbourhood on their own.

Read more: The elephant in the planning scheme: how cities still work around the dominance of parking space

Many good reasons to reverse the trend

Allowing children freedom to move safely around their neighbourhoods has well-established benefits. These include physical and mental health, sense of belonging and place, socialisation and participation in public life, and even meaningful climate action.

The contrast between Australian cities and Japan, and our suburbs of the not-so-distant past, raises challenging questions. Perhaps the remarkably child-friendly outcomes we’re seeing in Japan can inspire us to rethink what kinds of neighbourhoods are possible – and what kinds of lives our children can have.