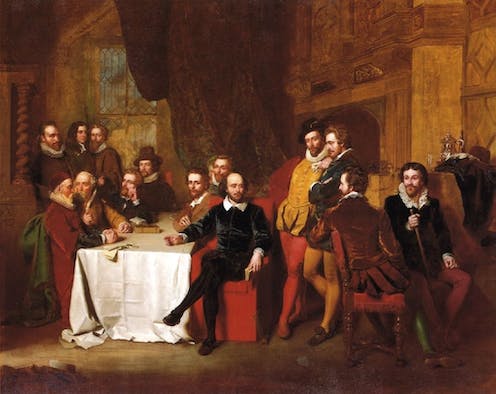 With its round amphitheatre, The Globe is the most famous playhouse associated with Shakespeare - indeed, a working, pop up replica of it is currently in Melbourne. But long before Shakespeare or his plays appeared at the Globe, another forgotten stage was the Bard’s temporary...

With its round amphitheatre, The Globe is the most famous playhouse associated with Shakespeare - indeed, a working, pop up replica of it is currently in Melbourne. But long before Shakespeare or his plays appeared at the Globe, another forgotten stage was the Bard’s temporary home.

It is even possible that the first purpose-built stage to house Shakespeare was at a playhouse that stood a mile south of the London Thames at the Newington Butts juncture. Rather than round, the playhouse would have been relatively small and rectangular – a conversion of an existing commercial building.

It was here, in June 1594, that theatre entrepreneur Philip Henslowe recorded the first known performances of the Lord Chamberlain’s Men, a theatre troupe of which Shakespeare was a founding member, playwright and actor. The company performed versions of Hamlet, Taming of the Shrew, and Titus Andronicus over 11 days.

The evidence also suggests that the actor Richard Burbage wouldn’t have been at the Newington Butts playhouse. Yet most have assumed Hamlet was a play Shakespeare wrote for Burbage.

While Shakespeare’s plays were performed at smaller venues such as inns and courtyards (possibly as early as 1589), the Newington Butts’ shows were very likely to have been the first on a major Elizabethan stage constructed specifically for the kind of theatre for which he was about to become famous. It soon vanished from history, and was largely forgotten by Shakespeare scholars.

But using 18th-century maps, I’ve been able to figure out where it likely once stood. This historically significant site is likely now under a shopping centre south of the Thames.

The Newington Butts playhouse was built in 1575 and continued operating until 1594. The playhouse would have had at least two tiers of seating around the perimeter to be financially viable, seating about 700 to 800 patrons. It was closed down when the new leaseholder Paul Buck agreed to convert it to some other purpose – it is likely he converted the building to tenement housing. 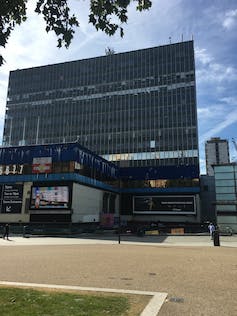 One of the reasons the playhouse has been easy to forget, and difficult to locate, is that there are no maps from the period that show the junction there. From the perspective of the Elizabethan mapmaker, there was not much to see south of the Thames – London was located on the north side of the river, and the road to the south quickly ran into fields only pockmarked by the occasional dwelling place or church.

While early modern maps and panoramas have been very helpful in locating the more famous playhouses like the Globe on London’s Bankside, they provide no help in searching for the playhouse at Newington Butts.

Some maps of the roads survive from at least 1681. In 1955, surveyor Ida Darlington pointed out that a property to the east of the juncture on this map was the same as that on which the playhouse stood. However, the map is of too poor quality to find a precise location. 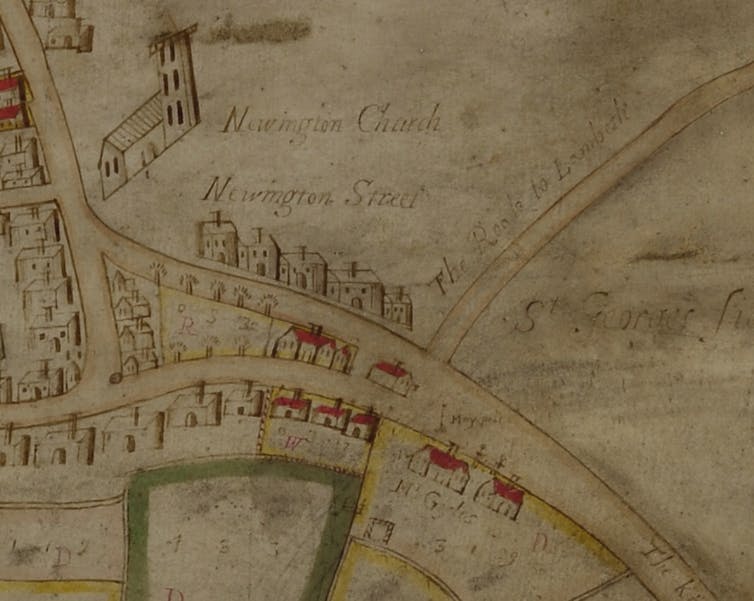 A detail of the 1681 map showing the Newington Butts juncture. North is to the right of the picture. Author provided

I used another map from 1746 drawn up by surveyor John Rocque to pinpoint the playhouse. The building north of the junction has remained in the same place for several hundred years. It began as stables, later becoming the Elephant and Castle Inn. Knowing this, and using early leases that record the site of the playhouse, I could figure out that the playhouse stood southeast of the inn. 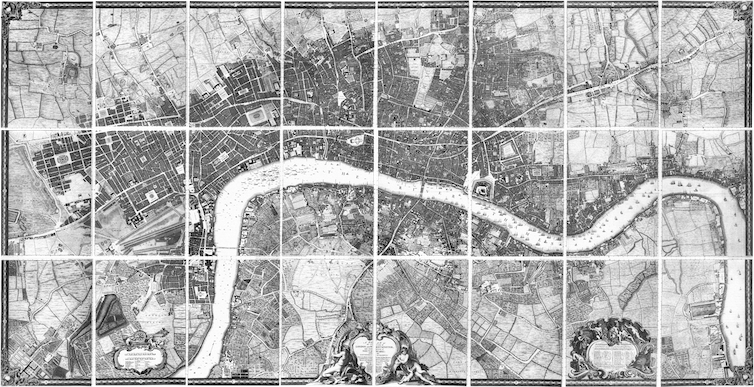 In 1960, the Newington Butts junction was replaced by the Elephant and Castle roundabout. The site of the playhouse now likely lies under the Elephant and Castle shopping centre, named after the inn that stood there until 1960. Any archaeological remains, if they survived the redevelopment, would thus be under where the market stalls are situated. Unfortunately, this would seem unlikely, as the shopping centre’s foundations were very deep.

So where did Shakespeare’s troupe go after Newington Butts? Their next known stopping point was in Marlborough. By the end of 1594, they ended up performing at the Theatre in Shoreditch, the first of the famed round theatres. In 1598, the Theatre was closed down and the more famous Globe was built in 1599.