For many Australians who studied Chinese language in the 1970s and 1980s (including this reviewer), Pierre Ryckmans (also known by his nom-de-plume, Simon Leys), was an inspirational teacher with a legendary mastery of Chinese and a passionate love of traditional Chinese art and literature.

To ardent Maoists of the 1960s and 70s he was the bête-noire of sinology — one of the few China-watchers who turned his barbed wit and invective against the high tide of adulation for the Chinese leader that swept through leftist circles in the West. In the calmer days of the 1980s and 90s, we in Australia knew him as a powerful if controversial public intellectual, who intervened on a broad range of topics: Mother Teresa, the continuing relevance of George Orwell, conservative values, and the role of the university in the pursuit of truth.

Ryckmans wrote numerous books about Chinese art and politics, but also an acclaimed novel, The Death of Napoleon. He lived for over 40 years in Australia and taught Chinese language and culture to generations of Australian students at the ANU and the University of Sydney between 1971 and 1994. Married to a woman from Taiwan, Ryckmans raised four children in Australia. A keen mariner, he enjoyed sailing around Sydney harbor in his leisure time. He passed away in Sydney in 2014 at the age of 79.

However, in many ways, Ryckmans was unique as an “Australian” intellectual. When he was invited to present the Boyer Lectures in 1996 he sought to persuade his listeners through a deep set of meditations that, “Truth is not a conclusion, but a premise”. The best publicized quote from the lectures was this throwaway line: “Only a moron would wish to attend the Olympic Games.” This did not go down too well with the sports-mad Australian public.

Those who want to understand more about this most unusual Australian public intellectual will welcome Philippe Paquet’s Simon Leys: Navigator Between Worlds. However, the reader should be warned in advance that this is a vast omnibus of a work, reminiscent of “the loose baggy monsters” type of epic novel, as characterized by Henry James.

Paquet, described here as “a Belgian journalist, historian and sinologist” is the author also of a biography of Madame Chiang Kai-shek. His biography of Leys was published in French by Gallimard in 2010. It has now been translated by Julie Rose, a distinguished translator of French literature. The volume consists of 664 pages, 27 chapters, an epilogue, chronology, copious endnotes, a bibliography of works published by Ryckmans/Leys and an Index. Do not expect a traditional biography so much as a meandering exploration of intellectual currents in the Francophone world of the last half century through the medium of a Belgian Francophone intellectual. 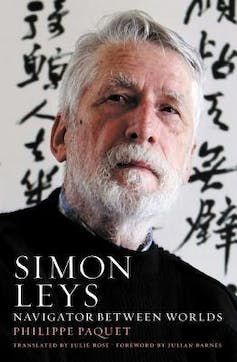 The biography is designed for the intellectually curious. While chapters are in approximate chronological order, Paquet darts off in multiple directions in search of thematic inspiration. A chapter on Ryckman’s early life in Brussels, for example, will include lengthy musings on Belgian artists, English author Evelyn Waugh, Christopher Hitchens’s attack on Mother Teresa, Simon Weil, euthanasia, and even an anecdote about Ryckmans’s surprising eloquence in a NSW court when facing charges of speeding in a narrow lane without his driving licence (“he made such a stirring speech in his defence that the judge dismissed the charges against him on the spot”).

The list of acknowledgements includes very few individuals from Australia. The author relies heavily on correspondence and interviews with Ryckmans over a number of years but appears not to have sought the views of Australia-based colleagues and others who came to know him during his 40-year sojourn here. Australian sinologists will only find tantalizing glimpses of the Ryckmans they knew in Canberra and Sydney but will learn a great deal about Ryckmans/Leys, the world-famous Francophone intellectual.

Paquet perceptively pins down the significance of the dual nature of the author, Leys/Ryckmans. The name Simon Leys was adopted initially when Ryckmans worked as a diplomat in Beijing at the same time that he was courting world-wide controversy as the author of trenchant works exposing the brutality of life under Mao. The best known are The Chairman’s New Clothes: Mao and the Cultural Revolution and Chinese Shadows. However, Leys, the global intellectual, increasingly took over from Pierre Ryckmans, the sinologist.

As Leys, the author felt free to range far and wide, pursuing intellectual interests way beyond Chinese politics and civilization. His passion for sailing led to his translation into French of the multi-volume book of Richard Dana, Two Years Before the Mast. The absolute power of the captain as “the only master on board after God” and the abject subjection of the seamen captured Leys’s imagination, and perhaps inspired his deep abhorrence of despotism in any form.

When questioned about the broad-ranging nature of his interests, Leys responded that he was

someone who wants to cultivate himself without being classed among sinologists even if their scientific work is indispensable… What interests me is following my own bent in all the things I’m curious about.

Harvard’s John King Fairbank, a towering figure in sinology in the United States, who was often the target of Ryckmans’s trenchant criticism, once described Leys as “definitely a Western avatar of the former ruling class of Chinese men of letters whose aesthetic ideals he obviously shared”.

Ryckmans the professor retired in 1994, sick at heart with the commercialisation of the university experience. It was, he said:

a bazaar where a thousand wares are spread haphazardly, while the scholars themselves are turned into peddlars, touts and pimps, desperately competing to hustle for a few more suckers.

He was uncompromising on the true role of a university. It should not be dedicated to utilitarian purposes but serve society as an institution “where scholars seek truth, pursue and transmit knowledge for knowledge’s sake — irrespective of the consequences, implications and utility of this endeavor”. The goal of a true university is thus not to award degrees but to provide “a place where a chance is given to men to become what they truly are”.

Since Ryckmans retired, the university sector has become Australia’s third largest “export industry” and Vice-Chancellors enjoy the salaries and reputations of bank barons.

An intellectual interested primarily in self-cultivation and the pursuit of truth would barely survive at any university in Australia. For these reasons Simon Leys: Navigator Between Worlds deserves to be widely read and savored for its insights and wisdom.

Simon Leys: Navigator Between Worlds by Philippe Paquet, translated from the original French by Julie Rose, is published by La Trobe University Press, in conjunction with Black Inc.