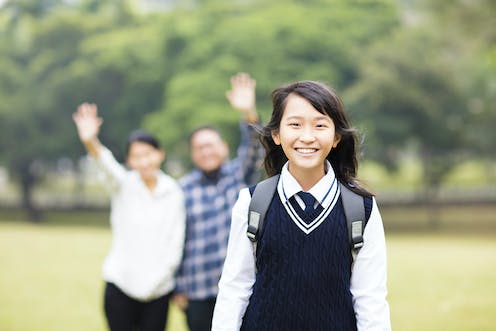 Women are underrepresented and underpaid in science, technology, engineering and mathematics (STEM).

The majority of programs and schemes addressing this problem focus on girls, or their teachers, or on assisting businesses to engage with female students.

But these often leave out one vital factor: the parents of girls.

To realise the full benefits of an inclusive, diverse STEM workforce, we should pay attention to the conversations happening at home. Careers in STEM are not solely borne from having the right education connected with the right jobs.

Read more: How to find success as a woman in science

Australian women are substantially disadvantaged both in education and earning capacity in STEM – and the causes are many and complex.

Good people in education, government and industry are striving to “seal the leaky pipeline” or “close the gender gap”, motivated by the desire for fairness and by the belief that increasing our STEM workforce is critical to Australia’s future economic wellbeing.

The pipeline sealers and gap closers are trying a wide variety of tactics:

But so far, worldwide, the situation is not improving.

Surveying by the OECD indicates that compared to females, male students have significantly higher belief in their own capability in science, and that males are four times more likely to expect to work in science and engineering or ICT professions than their female peers. These figures contribute to the broader perception that STEM is a difficult, masculine field.

News reports of science being underfunded, and skewed towards men who work with other men – the so-called “Daversity” problem – may also contribute to public appreciation that a career in research science is a hard slog for women.

Mums and dads read the news, and so such factors may play into the decisions girls make in pursuing science and technology, as parents hold a critical role in shaping their children’s career choices.

This aligns with a 2016 Queensland survey where almost 80% of parents indicated they’d encourage science classes for their children, but less than 60% would encourage a career in science.

One of us - Natalie – saw the impact of parents’ beliefs firsthand when acting as a course advisor for students entering the University of Wollongong. The following are a few examples:

Perhaps parents could picture their daughter as a lawyer, doctor or accountant, but they couldn’t imagine a successful future for them as a scientist. It seemed that parents didn’t appreciate the range of high influence, inspiring and financially rewarding jobs to which a STEM degree could lead, including in government and industry.

Prominent Australian women who were educated in science but are not in research careers include Janet Holmes à Court, Kate Carnell, Katherine Woodthorpe, Anne-Maria Arabia and Kelly-Ann O'Shannassy.

Historically, the celebrated STEM role models have been male “uber” professors – extraordinarily high achievers working in a purely academic environment, making world-changing discoveries. This is the traditional representation of success in STEM.

We need to expose parents to non-stereotypical STEM role models: women in attainable positions, and not just in academia.

We should be showing parents the variety of careers – including many well-paid roles – that exist in STEM, so they can visualise the diverse opportunities for their children. It could be as simple as inviting parents to an evening presentation at their children’s school, to meet a range of people working in STEM.

We can broaden parents’ concept of STEM by demonstrating that STEM is everywhere, changing our daily lives in many positive ways, and that it’s a burgeoning field.

Read more: Diversity in science is good for science and good for you

Prof Martin Westwell is the inaugural Director of the Flinders Centre for Science Education in the 21st Century. He says,

Parents definitely play a role in shaping how their children identify what is “like me” and find their in-group. This affects which courses of study and careers children choose – they select the courses and careers in which they feel they belong. So creating a sense of belonging for females in STEM is critical to increasing their participation and success.

If we increase parents’ appreciation of STEM as a growing, diverse field of employment, with good prospects for a fulfilling and enriching career, we could change the conversations they have with their daughters.

Increasing female participation in STEM education and careers is good not just for women, but for science, technology and society more broadly.