Phenibut was initially developed in the 1960s in Russia as an anti-anxiety (anxiolytic) drug with cognitive enhancing properties. It has since attracted a strong following of users in the “smart drug” market, with claims of boosting memory recall and exam performance.

Originally given to Soviet cosmonauts to combat anxiety and insomnia, the powdered drug is suspected to have played a role in the recent overdose of seven teenagers at a Queensland private school. 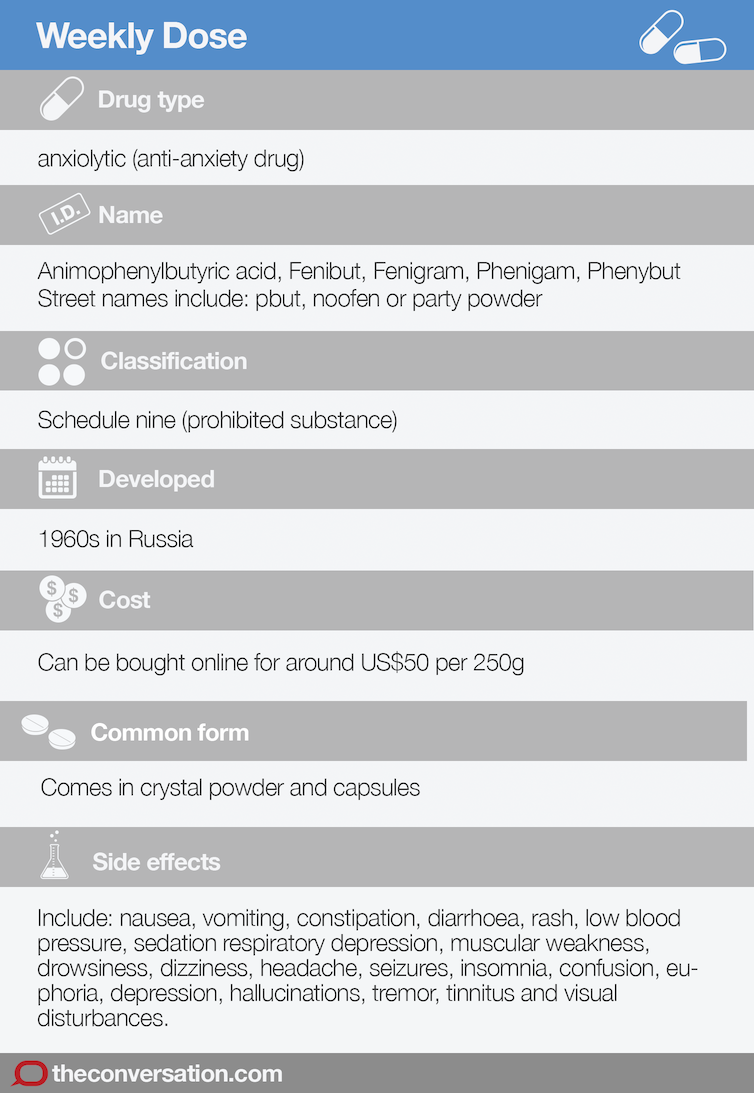 How it works Phenibut – also known as pbut, noofen, party powder (or its scientific name β-phenyl-γ-aminobutyric acid and brand name Bifren) – is a psychotropic drug, which means it affects the user’s mental state. The drug is similar in structure to a type of neurotransmitter known as neurotransmitter γ-aminobutyric acid (GABA), which plays a role in reducing excitability and anxiety, as well as enhancing euphoria and cognitive function. Phenibut binds to a specific subtype of the GABA receptor, activating a similar reaction as GABA. Animal studies have shown that phenibut is able to penetrate the blood brain barrier. The blood-brain barrier is is an important mechanism that stops harmful toxins and bugs travelling through the blood stream and entering the brain. Read more: Explainer: what is the blood-brain barrier and how can we overcome it? Once phenibut reaches the brain the result is reduced anxiety and social inhibition. Because it depresses the central nervous system (like GABA), it is also used as a mood elevator and tranquiliser. Phenibut is structurally similar to the widely prescribed drug baclofen (Lioresal), which is available in Australia. Baclofen is prescribed as a muscle relaxant for patients with conditions such as multiple sclerosis. What is it used for? Phenibut can be used to treat anxiety, post-traumatic stress disorder, alcohol withdrawal syndrome and vestibular (balance) disorders such as vertigo. It is also used recreationally in many countries including the United States, United Kingdom and Australia to reduce social anxiety and induce feelings of euphoria. Animal studies also show it has potential to improve brain function after a stroke. Phenibut is not licenced for use in the European Union, Australia or the United States due to safety concerns. In Australia specifically, the drug regulator, the Therapeutic Goods Administration (TGA) has rejected 11 public submissions for registration and states that phenibut “represents a significant risk of harm, including overdose”.

In Russia, Phenibut is sold commercially. Screenshot Although phenibut is commercially available in few countries around the world, aside from Russia, a recent study showed that 48 unrelated internet suppliers sold phenibut from the United Kingdom, United States, China, Australia and Canada. In Russia and the Ukraine, it is commercially available as БИФРЕН® (Bifren) and daily doses range from 500 to 2000 mg. Phenibut was available as a powder in amounts ranging from 5 g to 1,000  kg and as capsules containing 200–500 mg in packs of between six and 360. How was was it developed? Phenibut was first synthesised in Russia in the 1960s by Vsevolod Vasilievich Perekalin and his associates at the Department of Organic Chemistry of the Herzen Pedagogical Institute in St Petersburg, Russia. In initial publications, phenibut was known as phenigamma. The drug used to be included in medical kits for cosmonauts on Russian space flights due to the reports of enhanced cognition and high tranquilising properties. Side effects Side effects of phenibut are generally linked to its central nervous system depressant effects, such as sedation and problems with breathing. There is currently limited information about phenibut. But because it has similar pharmacological properties to baclofen it’s likely to have similar side effects. Read more: Explainer: how do drugs work? These include gastrointesinal symptoms (nausea, vomiting, diarrhoea), central nervous system symptoms (insomnia, confusion, euphoria, depression, hallucinations), and visual disturbances and musculoskeletal symptoms (such as tremors). Users of phenibut can also develop tolerance within days, needing more of the drug to feel the same effects. This can increase the risk of adverse effects. Users may develop withdrawal effects, such as severe rebound anxiety and insomnia, when they stop taking the drug. Despite phenibut not being registered or legally available in Australia, the TGA has received three reports of problems related to phenibut use in the past five years. These cases range from isolated symptoms of headaches, to a cluster of symptoms such as visual impairment, muscle spasms, palpitations and nausea/vomiting. Signs of overdose include: shallow irregular breathing; drowsiness and lethargy; increased sweating; decreasing blood pressure; nausea and vomiting; and lowering body temperature. The reported adverse events of phenibut are just scratching surface of a largely unregulated online drug market with no standards of quality assurance. So for those students seeking the competitive edge, it looks like those extra marks are not worth it after all.