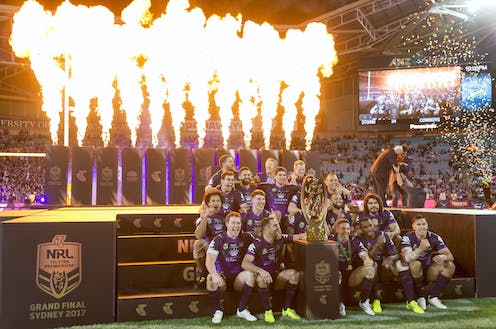 The NRL's controversial salary cap has clearly played a role in keeping the league so equal.AAP/Craig Golding

As the 2018 NRL season kicks off, few of the game’s supporters will be aware it is enjoying a run of competitive balance unequalled anywhere in major world sport.

By the time of the Grand Final at the end of September, it will be more...

As the 2018 NRL season kicks off, few of the game’s supporters will be aware it is enjoying a run of competitive balance unequalled anywhere in major world sport.

By the time of the Grand Final at the end of September, it will be more than 25 years since a team last retained the NRL crown (or that of its NSWRL/ARL predecessors).

You have to cast your mind back to the heady days of the Brisbane Broncos in 1993, and their Tina Turner-fuelled celebrations, to find the last back-to-back premiers. The subsequent run of 24 seasons without a repeat champion is not just unprecedented for top-level rugby league in Australia – it’s unparalleled in any major sporting competition anywhere in the world.

Since its introduction in 1990, the NRL’s salary cap has not been without its controversy, scandal or criticism. Many detractors argue it isn’t working and is failing to distribute the league’s talent evenly.

Some cite the seeming inevitability of seeing Melbourne Storm captain Cameron Smith’s face on Grand Final day. Others will quote the common joke that some teams seem to be operating more under a salary sombrero than a cap, such is the amount they are able to squeeze under it.

However, the simple fact is the numbers show that no major sporting competition in the world has enjoyed such a long run of diverse champions.

It wasn’t always this way. In the last years before the salary cap’s introduction, between 1980 and 1990, Parramatta and Canterbury-Bankstown won four premierships each and Canberra secured a couple. Just one other side got a look-in during those 11 years.

Imagine a competition with N teams that compete each year, with one side declared premiers. If, each year, all teams were equally likely to win the title, then – on average – you’d expect to wait about N minus one years to see back-to-back premierships.

Repeat successes would be less common in larger competitions.

In reality, for a more realistic competition, you’d expect repeat champions to come around more frequently than under this assumption.

Common sense suggests a team good enough to be premiers one year will have a better-than-average chance of repeating their success. This is the pattern seen in all sporting leagues across the world.

Examining results from 26 elite competitions across 12 different sports, involving teams from five continents, the NRL’s run of competitive balance stands out as an exception to the global trend.

I calculated the current run without a back-to-back champion for each competition. Different competitions have different numbers of teams, so this needs to be taken into account for any like-for-like comparison.

Under the very conservative assumption of equal strength teams, the odds of such a repeat title drought occurring can be calculated according to the equation below, where d is the number of years since the last repeat champion in a league with N teams.

It isn’t simply that the NRL’s current run stands out among trends from other contemporary leagues. Dusting off the history books, none of these other competitions has ever seen a drought of back-to-back titles quite like the modern NRL.

Of the leagues included here, the NRL is one of only three that has ever had a drought of back-to-back premiers stretching for more years than there are teams in the competition.

The other two – the Women’s National Basketball Association (WNBA) in the US and the southern hemisphere Rugby Championship – are both much younger competitions. The Rugby Championship has only been a three- or four-team competition, and the WNBA is riddled with instability and many defunct teams. Of the well-established leagues, the NRL stands alone.

An apology to Broncos fans

There are probably some keen Queenslanders disputing that the NRL’s drought is quite as long as claimed here. In 1997, the Broncos were one of the clubs that broke away from the NRL and played in the rival Super League competition.

After winning that competition during its one and only season, Brisbane then rejoined and claimed the 1998 NRL crown.

Even if you include the triumph in a rival competition followed by NRL success as a back-to-back title, the run of 19 years and counting still stands as statistically anomalous.

True to its roots

Statistically speaking, there is no major sporting competition in the world that has enjoyed such a run without crowning back-to-back champions.

For all its critics, it is difficult to believe the salary cap hasn’t worked better than in many other leagues at promoting competitive balance and parity.

In many ways, this seems fitting for the game’s history. Rugby league is, after all, a game born out of a staunch egalitarian rebellion more than a century ago.