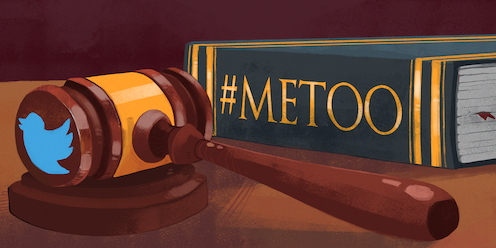 Critics have raised concerns that #MeToo has turned into a “trial by Twitter”, suggesting it has turned the legal principle of innocent until proven guilty on its head. The Australian’s opinion columnist Janet Albrechtsen argued this point on the ABC’s #MeToo Q&A special last month.

But such comments reveal an ignorance of the meaning and context of this principle. Leaving aside the fact that some people on social media side with the accused, public discussion – whether it takes place on Twitter or around a water cooler – is not comparable to state punishment.

Those concerned about the failure of a legal principle in relation to #MeToo might better focus on that of justice for victims.

The right to an untarnished reputation

Broadly speaking, there are three core elements to #MeToo.

First, the sheer volume of disclosures highlights that sexual harassment and abuse are unacceptably widespread – and that institutions and society at large are failing to protect and support victims. Then there is the practice of using the hashtag to challenge the stigma and shame that has somehow accompanied identifying as a victim. Finally, some disclosures on Twitter have sought to name and shame perpetrators of abuse in order to seek accountability and justice.

Read more: From #MeToo to #RiceBunny: how social media users are campaigning in China

Only this third element plausibly raises concerns around “trial by Twitter”. So, before delving into the problematic subtext of these comments, I’m going to play devil’s advocate and consider whether these public accusations do conflict with the presumption of innocence.

The presumption of innocence is enshrined in Article 14.2 of the International Covenant on Civil and Political Rights. It states simply that,

Everyone charged with a criminal offence shall have the right to be presumed innocent until proved guilty according to law.

A related right, enshrined in Articles 14.1 and 14.3, is the right to a fair trial, which includes equality before the law and,

a fair and public hearing by a competent, independent and impartial tribunal established by law.

In relation to the public accusations levelled on #MeToo, this means that if someone is charged with a criminal offence, the system would have to be set up to avoid any predetermination of guilt based on what has been written in the public domain. Of course, this is hardly a new challenge for the judicial system and the court is empowered to impose publication restrictions, to screen jury members, and even to move the location of a trial for this reason.

Read more: #MeToo and #TimesUp move off the red carpet and towards activism at 2018 Oscars

But Albrechtsen’s reference to a “trial by Twitter” seems to imply a concern over something else entirely – not the right to a fair criminal trial, but a right to an untarnished reputation. This is quite a different matter.

It is true that public shaming by Twitter can exact tangible damage. Welsh journalist and author Jon Ronson wrote a book on the subject, and documented sustained economic and psychological harm from so-called “Twitter pile-ons”. However, Ronson’s concern focused on people who had engaged in a victimless breach of social mores. He also noted that the only people who escaped unscathed were men who were caught up in consensual sex scandals.

The fact is that we do have legal protections in place for people’s reputation – the law of defamation. Indeed, Australian defamation laws are widely regarded as placing excessive emphasis on reputation protection at the expense of freedom of expression.

Given this risk of being sued for defamation, it is worth examining why victims are turning to social media to hold perpetrators to account, since the rights of society and victims are theoretically promoted via the four (somewhat contradictory) aims of the criminal justice system.

The problem is that the criminal justice system is particularly poor at achieving these outcomes for sexual harassment and assault. Consider the following statistics.

In a 2016 ABS Survey, one in two women (53% or 5 million) and one in four men (25% or 2.2 million) reported having experienced sexual harassment during their lifetime. A further one in five women (18% or 1.7 million) and one in 20 men (4.7% or 428,800) had experienced sexual violence since the age of 15. More significantly, nine out of ten women did not contact the police, and even those who do go to the police are statistically unlikely to see a conviction.

Across 2009-2010, for example, there were 7,066 incidents of alleged rape, indecent assault and/or incest recorded by Victoria Police. Of these, only 33.7% (or 2,381) resulted in prosecution, with just 23.3% (or 1,643) ending up in court. The Victoria report did not have complete data for conviction rates, but a similar NSW study from 2015 found that just 50.3% resulted in conviction and less than half of these resulted in a custodial sentence.

A voice for victims

Beyond these statistics, there is also the fact that many victims find the system alienating and re-traumatising. Not only is their character and behaviour often placed on trial, but victims are often silenced by the justice system and denied the opportunity to shape the narrative of their own experience of assault. In light of these poor experiences and low likelihood of securing justice, it’s clear why so many victims are seeking justice elsewhere.

And this is the key reason for #MeToo. It is a movement seeking an end to the culture of impunity that exists around sexual harassment and assault, and to demand that victims be given a voice in shaping the narrative of these crimes.

From this perspective, comments like Albrechtsen’s are problematic because they serve to once again silence victims and to reassert the rights of perpetrators to be privileged within this narrative. The #MeToo movement is a symptom of the fundamental failures of our criminal justice system to protect the rights of victims. It might be uncomfortable, but that doesn’t make it wrong.