As the federal government aims to ink a deal with the states on the National Energy Guarantee in August, it appears still to be negotiating within its own ranks. Federal energy minister Josh Frydenberg has reportedly told his partyroom colleagues that he would welcome a new coal-fired power plant, while his former colleague (and now Queensland Resources Council chief executive) Ian Macfarlane urged the government to consider offering industry incentives for so-called “clean coal”.

Last month, it emerged that One Nation had asked for a new coal-fired power plant in north Queensland in return for supporting the government’s business tax reforms.

Is all this pro-coal jockeying actually necessary for our energy or economic future? Our analysis suggests that renewable energy is a much better choice, in terms of both costs and jobs.

Read more: Solar PV and wind are on track to replace all coal, oil and gas within two decades

Virtually all new generation being constructed in Australia is solar photovoltaics (PV) and wind energy. New-build coal power is estimated to cost A$70-90 per megawatt-hour, increasing to more than A$140 per MWh with carbon capture and storage.

Solar PV and wind are now cheaper than new-build coal power plants, even without carbon capture and storage. Unsubsidised contracts for wind projects in Australia have recently been signed for less than A$55 per MWh, and PV electricity is being produced from very large-scale plants at A$30-50 per MWh around the world.

As the graph below shows, medium to large (at least 100 kilowatts) renewable energy projects have been growing strongly in Australia since 2017. Before that, there was a slowdown due to the policy uncertainty around the Renewable Energy Target, but wind and large scale solar are now being installed at record rates and are expected to grow further. 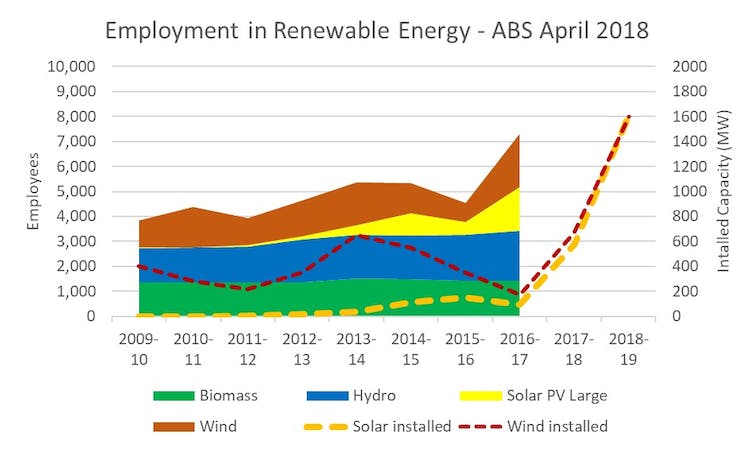 As the graph also shows, this has been accompanied by a rapid increase in employment in the renewables sector, with roughly 4,000 people employed constructing and operating wind and solar farms in 2016-17. In contrast, employment in biomass (largely sugar cane bagasse and ethanol) and hydro generation have been relatively static.

Although employment figures are higher during project construction than operation, high employment numbers will continue as long as the growth of renewable projects continues. As the chart below shows, a total of 6,400MW of new wind and solar projects are set to be completed by 2020.

Australia’s newest coal-fired power plant was opened at Kogan Creek, Queensland in 2007. Many of the political voices calling for new coal have suggested that this investment should be made in Queensland. But what’s the real picture of energy development in that state?

There has been no new coal for more than a decade, but developers are queuing up to build renewable energy projects. Powerlink, which owns and maintains Queensland’s electricity network, reported in May that it has received 150 applications and enquiries to connect to the grid, totalling 30,000MW of prospective new generation – almost all of it for renewables. Its statement added:

A total of more than A$4.2 billion worth of projects are currently either under construction or financially committed, offering a combined employment injection of more than 3,500 construction jobs across regional Queensland and more than 2,000MW of power.

As the map below shows, 80% of these projects are in areas outside South East Queensland, meaning that the growth in renewable energy is set to offer a significant boost to regional employment. 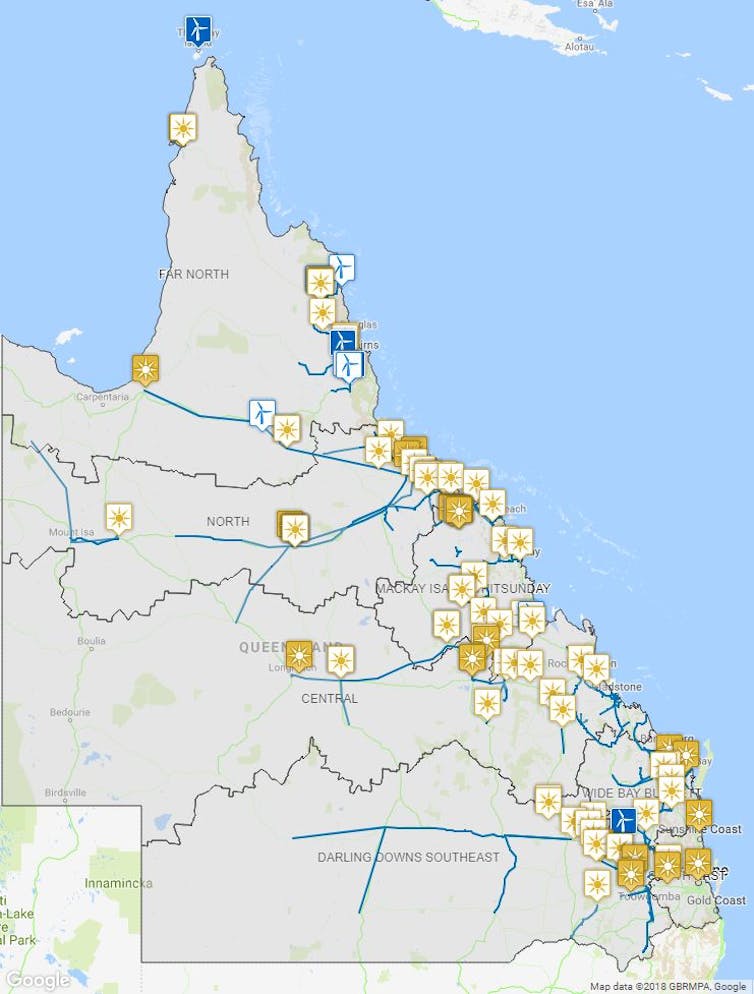 Tropical North Queensland, in particular, has plenty of sunshine and relatively little seasonal variation in its climate. While not as windy as South Australia, it has the advantage that it is generally windier at night than during the day, meaning that wind and solar energy would complement one another well.

Renewable energy projects that incorporate both solar and wind in the same precinct operate for a greater fraction of the time, thus reducing the relative transmission costs. This is improved still further by adding storage in the form of pumped hydro or batteries – as at the new renewables projects at Kidston and Kennedy.

Remember also that Queensland is linked to the other eastern states via the National Electricity Market (NEM). It makes sense to build wind farms across a range of climate zones from far north Queensland to South Australia because – to put it simply – the wider the coverage, the more likely it is that it will be windy somewhere on the grid at any given time.

This principle is reflected in our work on 100% renewable electricity for Australia. We used five years of climate data to determine the optimal location for wind and solar plants, so as to reliably meet the NEM’s total electricity demand. We found that the most cost-effective solution required building about 10 gigawatts (GW) of new wind and PV in far north Queensland, connected to the south with a high-voltage cable.

This kind of investment in northern Queensland has the potential to create thousands of jobs in the coming decades. An SKM report commissioned by the Clean Energy Council estimated that each 100MW of new renewable energy would create 96 direct local jobs, 285 state jobs, and 475 national jobs during the construction phase. During operation those figures would be 9 local jobs, 14 state jobs and 32 national jobs per 100MW of generation.

But the job opportunities would not stop there. New grid infrastructure will also be needed, for transmission line upgrades and investments in storage such as batteries or pumped hydro. The new electricity infrastructure could also tempt energy-hungry industries to head north in search of cheaper operating costs.

Katter, never one to hold back, asked “how could any government conceive of the stupidity like another baseload coal-fired power station in North Queensland?” Judging by the numbers, it’s a very good question.