Underpants. We tend not to talk about them but they are a fact of life (unless you go commando). Briefs have a fascinating history and are now being transformed by technology, with high-performance undies that claim to do everything from filtering flatulence to emitting soothing vibrations. 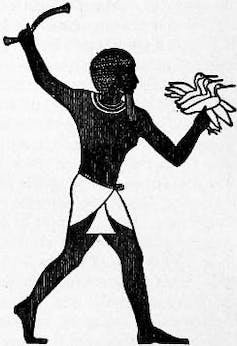 The first type of underpant was the loincloth worn by ancient Egyptians. Known as a schenti, it was made from woven materials, commonly cotton and flax, kept in place with a belt. The lower classes and slaves were almost naked, so technically this loincloth was often “outerwear”. But Egyptian art from 1189 BC to 1077 BC in the Valley of the Queens shows pharaohs wearing sheer outer garments, rendering the loincloth a type of underpant.

In Europe, during the Middle Ages (500-1500 AD), underwear consisted of a shirt made of fine linen or cotton for both men and women. A form of underpant returned during the 15th and 16th centuries, when men’s leg-hose were bifurcated (split in two).

To provide extra protection for the male genitalia, a padded codpiece was added. The codpiece also served as a symbol of sexual energy, designed to enhance rather than conceal the genital area. 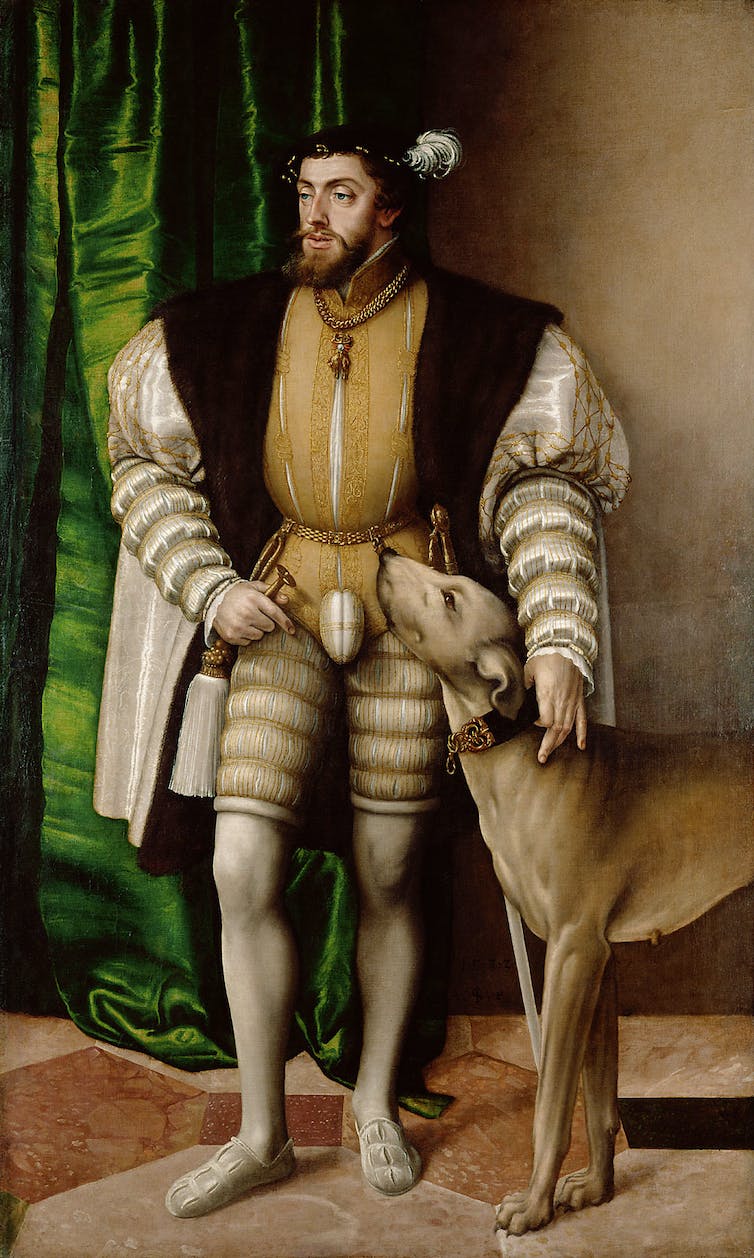 The arrival of drawers

In the early to mid 19th century, both men and women wore bifurcated drawers with separate legs – a loose type of knee-length trousers suspended from the waist. This simple style of underpant made relieving oneself more manageable, especially if several layers of petticoats or breeches were worn.

Closed crotched underpants for women (pantalettes) emerged in the mid to late 19th century. In 1882, dress reformer Dr Gustave Jaeger argued that wearing natural woollen fibres next to the skin would help disperse bodily poisons by allowing the skin to breathe. He also felt the elasticised qualities of knitted garments were more likely to promote exercise. 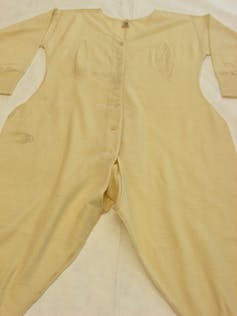 Also in the 19th century, the popularity of long-legged trousers for men led to a change in men’s underpants, with hose (long johns) extending to the ankle. These were made of silk for the wealthy and flannel, or later wool, for the masses.

For women in the early 1900s, getting dressed involved multiple layers of undergarments including chemise and drawers followed by a constrictive corset. During the first world war more women undertook physical labour in factories, mines and farms, and thus needed utilitarian garments. The silhouette of outerwear such as loose trousers and boiler suits paved the way for knickers, which women began wearing from around 1916. From the 1920s, the corset was gradually replaced by less restrictive elasticated versions such as the girdle and “step-ins” gradually replaced the corset.

Latex, a rubber yarn introduced in 1930, allowed stretch undergarments to become more figure-hugging. These eventually evolved into underpant styles similar to those worn today. In 1938, after the invention of the synthetic fibre nylon, lightweight easy-to-launder underwear started to appear.

Shorter, crotch-length underpants or trunks for men appeared after 1945. In 1959, a new man-made elastomeric fibre called Lycra™ was invented. Combined with cotton or nylon, it was strong, stretchable and recovered well. The result was more body-conscious underpants for men and women. 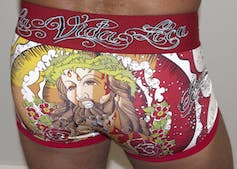 In the more permissive 1960s, underpants became briefer for both sexes and the Y-front was largely eliminated from men’s undies. By the 1970s, underpants were virtually seamless. (The thong, or G-string, I would argue, is hard to define as an underpant – its chief popularity seems to be that it offers wearers an invisible pant line.)

With advancements in fibre technologies and knitting manufacturing, underpants today can be as unassuming as a pair of Aussie Bonds briefs, or high-tech with the inclusion of haptic communication. 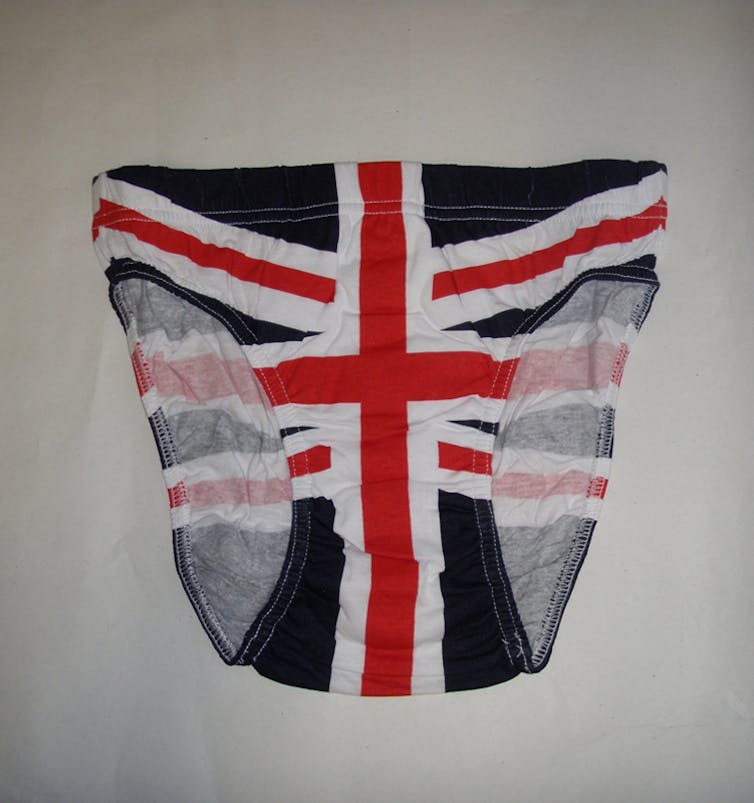 For instance, Sydney-born, NY-based company Wearable-X has teamed with condom manufacturer Durex to create interactive underwear called Fundawear. Fundawear has a “vibrating touch” that can be transferred from anywhere in the world through a smartphone app. The underwear contains actuators (which are similar to the devices that make smart phones vibrate). Couples wearing it converse via the app, transferring sensations to each other’s undergarments.

Meanwhile, brands Modibodi and Thinx have developed reusable underpants for women menstruating or experiencing incontinence. Manufactured from bamboo, merino wool and microfibre fabrics, the breathable and moisture-wicking layers draw fluids away from the body, securing them in a waterproof outer layer. The fabric technology allows the underpants to be rinsed in cold water, machine-washed and, once dry, ready for reuse. Since launching in 2014, Modibodi has become an Australian market leader for reusable period underwear. 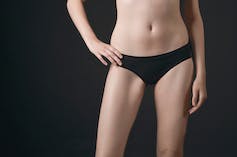 UK brand Shreddies has even developed “flatulence-filtering” underwear for men and women using carbon-absorbing cloth. According to its website, the underwear uses “the same activated carbon material used in chemical warfare suits”. Which is good to know.

Advances in material manufacturing, additive fabric coatings and body-centred smart textile applications have the ability to monitor patient physiological conditions and offer personalised care and direct user feedback to medical specialists. Researchers at the University of California have developed a textile-based, printable electrochemical sensor, which has the capacity to be used for a variety of medical and safety applications. The flexible textile sensors, for example, when printed onto the elastic waistband of underpants, can recognise chemical substances secreting from the skin.

Science is adding functions to underwear that could scarcely have been envisaged 50 years ago. The loincloth has come a long way.