Astronomers have found evidence that the supermassive black hole thought to lurk at the heart of our galaxy displays the gravitational properties dictated by the general theory of relativity.

The news was announced overnight at the European Southern Observatory (ESO), with the work published in the scientific journal Astronomy and Astrophysics.

Read more: Sizes matters for black hole formation, but there's something missing in the middle ground

By accurately tracing the position and speed of a single star (known as S2), astronomers have detected the telltale signature of Einstein’s gravity in action.

Newton vs Einstein: weak vs strong

Newton’s mathematical description of gravity reigned for 250 years, but a century ago Einstein’s insights into the nature of space and time rewrote our gravitational understanding.

For most places in the universe, where gravitational fields are weak, the mathematics of Newton and Einstein give identical results for the motion of galaxies, stars and planets.

But as the strength of gravity increases, subtle differences between the two theories emerge.

In fact, Einstein was guided by small but significant discrepancies in the orbit of Mercury about the Sun while reworking his vision of gravity. 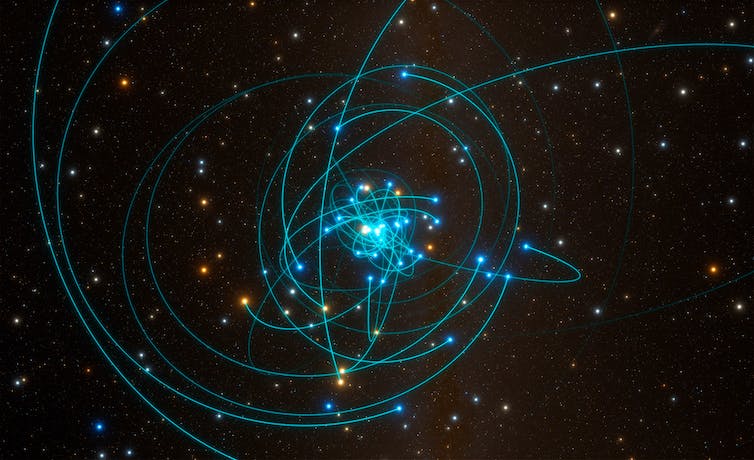 Stars in orbit around a supermassive black hole, the ideal laboratory to test Einstein’s general theory of relativity. ESO/L. Calçada/spaceengine.org, CC BY

For more than two decades astronomers have charted the orbits of stars around an apparent nothingness lurking at the heart of our Milky Way. An immense amount of mass, more than four million times the mass of the Sun, must be present to keep the stars on course.

That mass is concentrated into a tiny volume. Astronomers have only one candidate for such a monster: a black hole. This is a region of completely collapsed mass, known to exist as a consequence of Einstein’s vision of gravity.

While the motions of stars at the galaxy’s centre revealed the presence of the black hole, astronomers wondered if they could search for particular signatures of Einstein’s gravity by tracking their orbits.

For most stars this isn’t possible as they are far enough away from the black hole, where the gravitational pull weakens. Their orbits should therefore agree with both Newton and Einstein.

But one star, S2, possessed a tantalising, highly elliptical orbit. It passes close to the black hole every 16 years, at a distance of less than 20 billion km (only three times the orbit of Pluto within our Solar System). That’s a tiny distance on galactic scales.

The star travels at a blistering 7,600km per second, roughly 3% of the speed of light.

If astronomers could accurately trace S2 through the closest approach of its orbit - where the effects of general relativity should be strongest - the differences between the gravitational theories of Newton and Einstein should become apparent.

Pushing telescopes to the limit

Observing stars at the centre of the Milky Way is not easy. It’s a dusty and crowded field of view and the blurring of the Earth’s atmosphere introduces too much distortion. Could measurements be made that were precise enough to test the nature of gravity?

Astronomers are not easily daunted and they had time to prepare. They called on the Very Large Telescope (VLT), consisting of four 8-metre telescopes in the mountains of Chile. 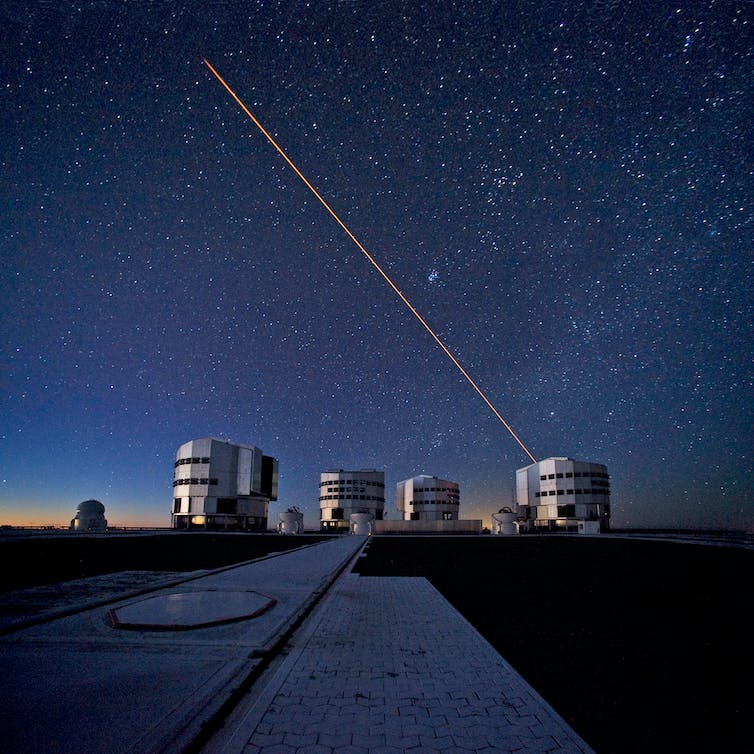 The light from the individual telescopes is combined to act as one immense mirror, a technique known as interferometry. This sharpens the resolution of the images and provides much needed fine-level detail.

To improve accuracy even further, the telescopes were fitted with adaptive optics to counter the effect of atmospheric blurring. They are also fitted with sensitive detectors to collect the light from individual stars.

With names such as GRAVITY, SINFONI and NACO, each represents an immensely complex instrument, built through the efforts of large teams of astronomers and engineers over many years.

In May 2018, when S2 was passing closest to the black hole, the team of astronomers were prepared.

The speed of S2 was monitored using Doppler shift, which tracks changes in the speed of the star by detecting small shifts in the wavelength of light emitted by the star.

The Doppler shift increased as the star approached the black hole and its motion initially agreed with the predictions of Newtonian gravity.

But as it drew closer still, the star seemed to increase in speed, peaking at more than 200km/s faster than expected. 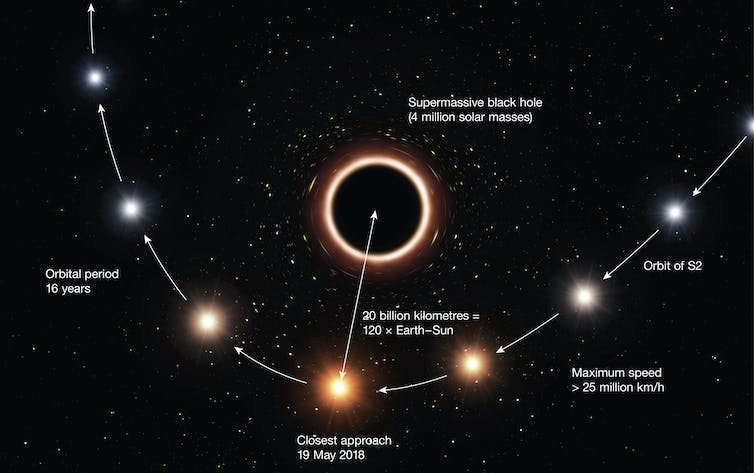 Under extreme gravity as it passes the black hole, the star S2 is slightly reddened (exaggerated here) just as Einstein predicted. ESO/M. Kornmesser, CC BY

This extra speed was not due to an actual increase in motion. Another effect was in play, as the light from the star had to fight against the increased pull of gravity.

Read more: Curious Kids: Where do black holes lead to?

Called gravitational redshift, this effect was predicted by Einstein more than a century ago. The star’s light was being stretched to longer (or redder) wavelengths, and the detected distortion matched expectations of a high-speed star zooming past a black hole.

These new observations are exciting and show that we are entering a new era of black hole research. With ever increasing accuracy, the general theory of relativity can be tested with more precision.

Some astronomers hope that these measurements will become so precise as to eventually show discrepancies that go against the general theory of relativity, ushering in a revolution in our understanding of gravity. Until that day, Einstein’s vision of space and time reigns supreme.