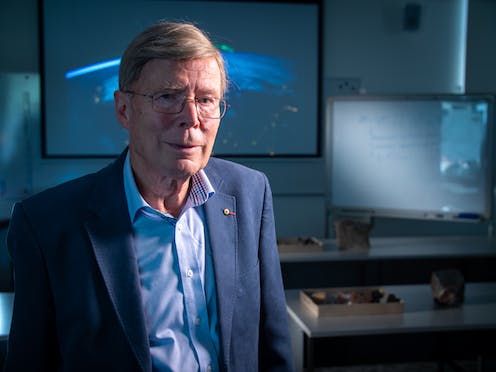 His work enables more accurate guidance of satellites and space missions, helps track changes in sea levels over time, and facilitates detailed understanding of the deep structure of Earth.

Lambeck’s research also underpins the GPS technology on which we rely for accurate navigation.

Kurt Lambeck’s field of expertise is geodesy: he tracks changes in the shape of the Earth.

“The Earth is remarkable. It has this wonderful record of its history going back to almost its very beginning. Almost everywhere you look, you learn something new about what’s been going on in our planet,” Lambeck said.

Read more: Melting ice and satellites: how to measure the Earth's 'wiggle'

Location tracking to the centimetre

Structural geologist and University of Melbourne Research Fellow Tim Rawling says the award confirms the importance of Lambeck’s work for Australia and the world.

“He has held leadership roles at Universities in France and the US and has won a number of international awards from Sweden, Japan, France, Norway, the US and the Netherlands.”

Lambeck, an Emeritus Professor at the Australian National University, guided the development of a comprehensive geodetic monitoring system called the AuScope network. The network consists of about 100 GPS stations, radio telescopes, and laser tracking systems, and enables location tracking with centimetre accuracy across Australia.

“Lambeck is considered to be one of the fathers of this initiative and was instrumental in bringing groups such as Geoscience Australia, the University of Tasmania, Australian National University and the various state government departments together to design and build this program,” said Rawling.

“The value of this infrastructure to Australia was confirmed this year when the federal government invested A$225 million in the National Positioning Infrastructure, which is built on this collaboration that Lambeck helped to establish.”

Not a simple sphere

Seen from a distance and by average measurement, Earth is a sphere. But in reality our planet is quite lumpy, and its form changes over time. Lambeck’s work has been vital in monitoring Earth’s contours, and seeing how they influence human activities.

“Geodesy as a field of expertise includes understanding the state of the crust, the movement of tectonic plates and also the study of the Earth’s gravity field,” said Rawling.

This can help scientists understand where stress may be building up in Earth’s crust due to deformation – which can help identify regions at higher risk of earthquakes and natural hazards.

It also factors in how melting and freezing of water changes the appearance and physical behaviours of Earth.

“Geodesy is very important for navigation, as the data sets that form the basis of maps and navigational systems require highly accurate understanding of the shape of the earth,” said Rawling.

Other scientists and teachers also received awards at the Prime Minister’s Prize event at Canberra’s Parliament House on October 17.

The winner of the Frank Fenner Prize for Life Scientist of the Year is Lee Berger. Her research identified the cause of mysterious and devastating mass frog extinctions that spread across the world starting in the 1970s: it was a skin fungus.

It took Lee Burger ten years to convince the global research community that a fungus was killing frogs.

Jack Clegg from the University of Queensland won the Malcolm McIntosh Prize for Physical Scientist of the Year for his work designing new kinds of crystals that are so flexible you can tie them in a knot, and molecules that can be customised to act as sieves for manufacturing in the oil industry, water filtration and pharmaceuticals.

Flexible crystals could prevent damage to your phone when you drop it.

Read more: Crystals like you've never seen them before: they're flexible

A group of five researchers based in Sydney – The Finisar team, consisting of Simon Poole, Andrew Bartos, Glenn Baxter and Steven Frisken – won the Prime Minister’s Prize for Innovation. Their work splitting light has led to faster and more efficient internet connections.

Biomedical engineer Geoff Rogers won the Prime Minister’s Prize for New Innovators. He invented a robotic guide wire that cardiologists can steer with a joystick through the body to reach a damaged artery.

The Prime Minister’s Prize for Excellence in Science Teaching in Primary Schools was won by Brett Crawford of Warrigal Road State School in Brisbane.

The Prime Minister’s Prize for Excellence in Science Teaching in Secondary Schools was awarded to Scott Sleap, the Deputy Principal, STEM, for the Cessnock Learning Community in NSW.

On the day of the awards ceremony, Professor Emma Johnston - President of Science and Technology Australia, and Dean of Science at UNSW – said award-winning science needs investment.

“The government speaks very highly of the STEM sector and understands the value of research and its potential to change the world for the better – it’s vital that this is backed up with the public investment and policy levers necessary to make this a reality,” she said.

“Australia continues to fall behind in the OECD nations when it comes to investment in research and development and who knows what award-winning science could be lost in the future without strong investment.”