You walk and talk and live on land, but your ancient relatives were fish.

It took about 480 million years for these fish to evolve and adapt to different environments and become the many different back-boned species (including ourselves) that are known as vertebrates.

But how did it happen?

The field of palaeontology looks at the when, where and why of animals changing over time and in response to their environment. Today a new paper by University of Pennsylvania’s Lauren Sallan (with other US and UK colleagues) answers the “where” question concerning our most distant fishy ancestors.

For the first time, the work shows that shallow coastal lagoons were vital in the early days of fish evolution. Today, similar seas (“shelf seas”) include places like Bass Strait, where water less than 200m deep forms around a continental shelf.

These places are still important today in sustaining biodiversity of life on Earth – so if we don’t look after our shallow oceans, the long term consequences for sea life could be dire. 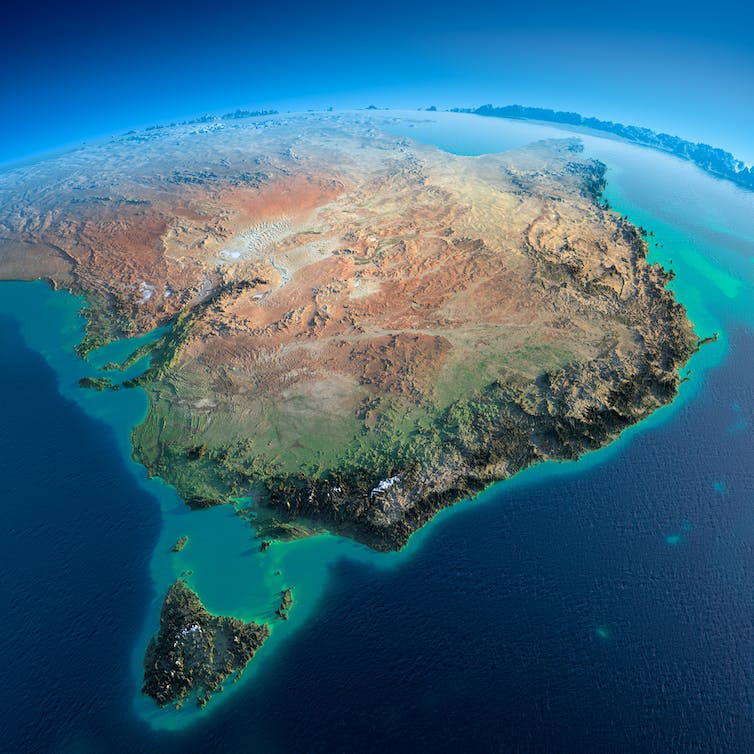 Ancient fishes lived, evolved and died in relatively shallow seas near land, similar to today’s Bass Strait between Tasmania and Victoria. from www.shutterstock.com

Invasion of the ocean

To conduct their research, the scientists used a database of 2,827 fossil vertebrate species. These spanned the 120 million years from when fishes first appeared (around 480 million years ago) to when they conquered the land as four-limbed creatures known as tetrapods (around 360 million years ago). The database plotted species habitats against their time ranges, and identified important stages in new species forming (known as diversification).

The research highlights that nearshore coastal environments, including estuarine and lagoonal settings, were hotspots for major episodes of early vertebrate diversification – not the open oceans where we might think fishes would naturally undergo evolutionary events.

Fishes with robust body shapes (such as lobe-finned species like the lungfishes) later sought habitats closer to land to diversify, whereas slender small-scaled forms like the jawless thelodontids (such as the yellow fish in the image below) and certain sharks tended to move to deeper water environments.

This research sets up an “invasion of the ocean” on par with the invasion of land. Our early ancestors moved into freshwaters quickly, but shifts onto reefs, and from there to the open ocean and new continents, required a great deal of time and change. 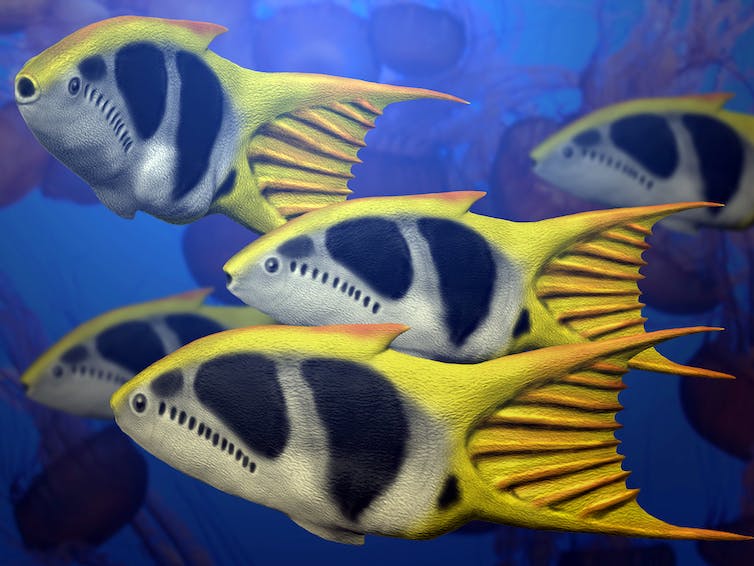 Fish with and without jaws

The first diversification of early jawless fishes (resembling the lampreys and hagfish of today) lead to many armoured fish groups appearing early in the Silurian Period (around 420 million years ago). Armoured fish had hard plates on their bodies, and most lived in shallow inland seas of the Northern hemisphere continents.

The oldest fossil record of jawless fishes comes from Australia, as seen by simple torpedo-shaped forms like Arandaspis that lived in the shallow Larapintine seaway across Australia some 470 million years ago.

Read more: The eyes have it: how vision may have driven fishes onto land

Other fishes evolved in discrete regions, like the East Gondwana Province (Australia and Antarctica) and in the supercontinent of Euramerica (a landmass combining much of North America and Europe).

Animals known as “the Wuttagoonaspis fauna” included many bizarre forms of placoderm and other primitive fishes, and is Australia’s oldest local group of vertebrates. Remains of these distinctive fishes that lived around 395 million years ago are found at many sites within a two million square kilometre area of central Australia. 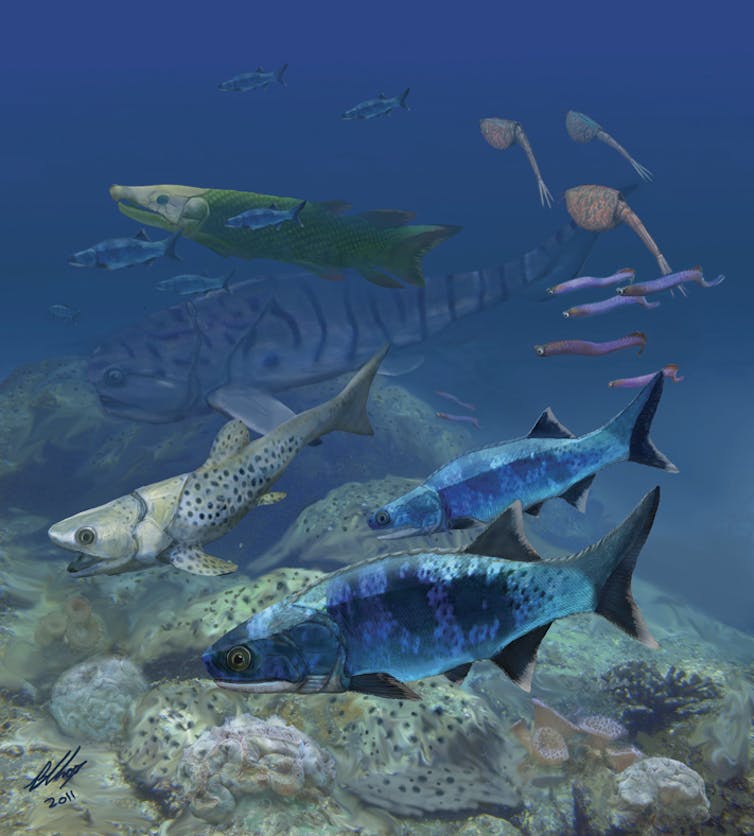 Reefs are well known as hotspots of biodiversity – today, many thousands of species of fishes live around coral reefs. But we now know this wasn’t always the case.

Prehistoric reefs, known from about 500 million years ago, were built by different organisms throughout time. Devonian period reefs, home to many species of fishes, were predominantly constructed by algae and sponges, with lesser input from corals.

Kimberley Devonian reefs were home to over 50 different species of ancient fishes that lived on algal structures bordering most of north-western Australia.

But the new research shows that Silurian and Devonian reefs were not unusually high in diversity, as previously supposed. This suggests that reefs played a much less important role in the early rise of jawed fishes than we thought. 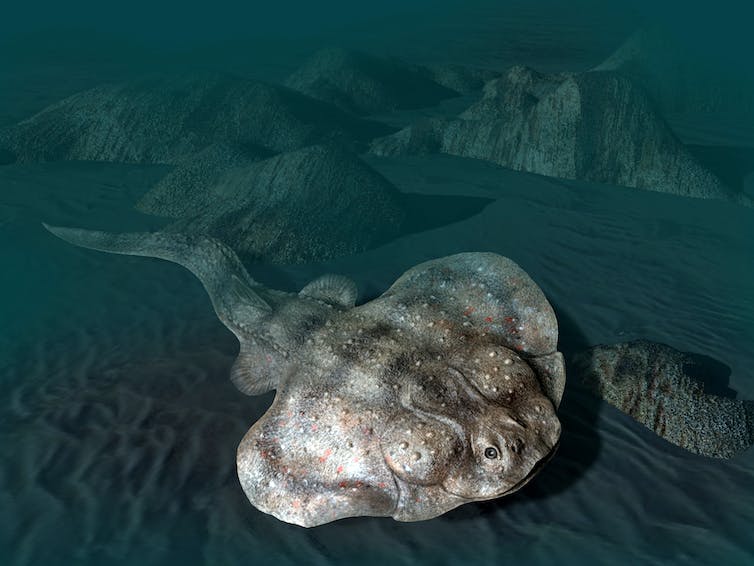 A jawed placoderm from the Devonian period but resembling a modern stingray sits near the edge of the shelf in Germany (artist’s impression). Nobumichi Tamura

Look after our shallow waters

The take home message of the new paper is that the cradle of early vertebrate diversification took place mostly in shallow water habitats near or spilling over the edges of a continent.

The regular rise and fall of sea levels over time would have had a great effect on habitat size for these marine species, making them particularly vulnerable to extinction when communities lived in basins that developed low oxygen levels.

Such extinctions involved many factors, and wiped out some of the dominant groups of fishes at the end of the Devonian period, including the placoderms. This allowed the modern fish groups, comprising mostly bony fishes and sharks, to become established.

The research holds some implications for today, as explained by one of the paper’s authors, University of Birmingham’s Ivan Sansom:

This work highlights how important these increasingly vulnerable near-shore areas are for species evolution. Modern threats from a combination of climate change, elevated sea levels, over-fishing and pollution could have extremely damaging effects on future species diversification.