The A$1.25 billion Community Health and Hospitals Program Prime Minister Scott Morrison announced this week should be awarded a big policy fail.

The move sets back Commonwealth-state relations by decades – and it’s unclear exactly how much money will actually be provided.

Rather than being based on any coherent policy direction, it appears designed to shore up support in marginal electorates.

One of the complicating factors in providing health care to Australians is the fact that the Commonwealth and states each have leadership roles in different parts of the system: the Commonwealth for primary care; and the states for public hospitals.

Health professionals yearn for the Holy Grail of a single level of government being responsible for all aspects of a patient’s care. That quest has proved illusory. But recent policy direction has at least sought to clarify the roles of the two levels of government.

Read more: Public hospital blame game – here's how we got into this funding mess

For the past five years, the states have been acknowledged as the “system managers” of the public hospital system. A rational, formula-driven funding framework has been created.

This framework means there is one level of government to whom all public hospitals are accountable: the state. And it means voters can hold their state government accountable for hospital planning and management. 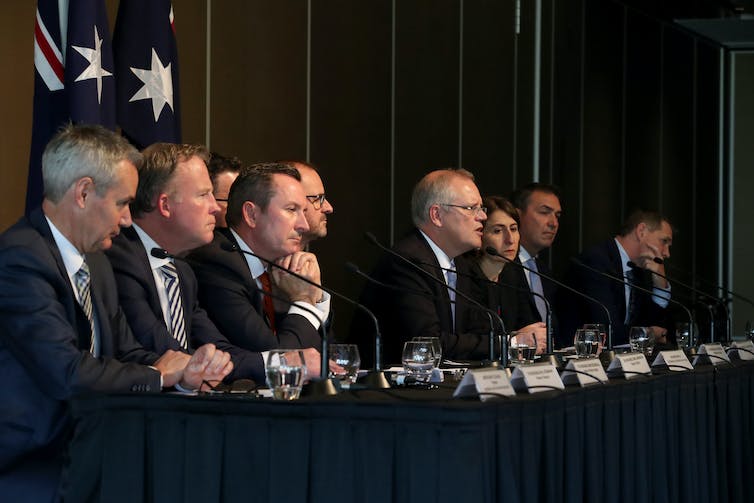 The proposal would allow the Commonwealth to override state priorities. AAP/Kelly Barnes

The new Morrison proposal tramples all over this policy rationality in the interests of electoral expediency. It replaces state-based planning with submission-based funding, which will enable a politician with a whiteboard in Canberra to override state priorities in favour of projects which have the greatest electoral appeal in targeted marginal seats.

It makes accountability for the overall system more confusing, and it assumes Canberra knows best.

It is a federalism fail.

Labor ran a devastating campaign in the July federal by-elections, especially in the Queensland seat of Longman, which involved calculating and publicising precisely how much worse off the local hospital was under the Liberal health policy – where the Commonwealth funds 45% of hospital growth – compared with Labor’s 50% sharing policy.

In the Longman case, Labor asserted there was a A$2.9 million cut to Caboolture Hospital based on the decisions taken in the 2014 Abbott/Hockey “slash and burn” budget.

Scott Morrison’s new cash splash is no doubt designed to overcome this political weakness for the Coalition.

Read more: Why scare campaigns like 'Mediscare' work – even if voters hate them

However, unlike Labor’s funding, which is ongoing, it’s unclear whether the extra largess the Coalition is offering will continue beyond the budget “forward estimates” (that is, the next four years). It’s unclear how much will be devoured from existing Commonwealth funding agreements, such as the dental agreement, which are coming to an end.

The Commonwealth has responsibility for most aspects of policy to address social determinants of health, particularly employment and income policies. Rational health policy would recognise the importance of considering these issues and balancing the health benefits of, for example, lifting the Newstart allowance, against funding for specific health initiatives. There is no hint this has happened with this announcement. 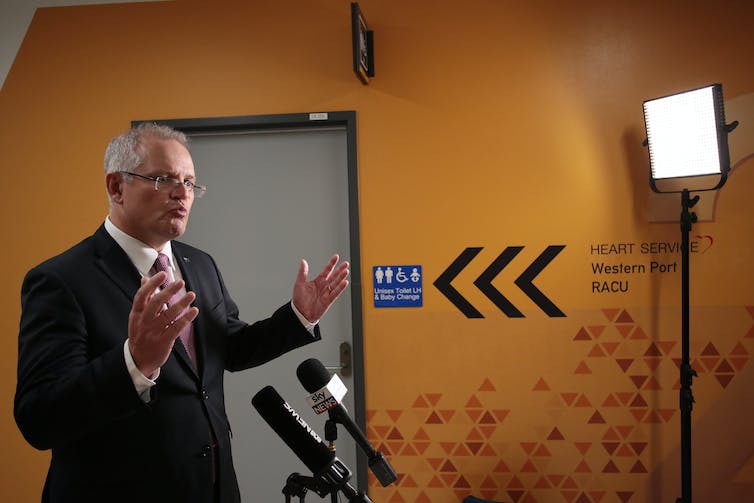 The announcements sound good but it’s unclear where the funding will end up. AAP/Stefan Postles

This may restore some rationality into the health handout, albeit with a lag of a few years. But the actual level of funding to be allocated to specific areas will be shrouded in Grants Commission opacity. Insiders will be able to follow the money, but voters will be kept in dismal ignorance about how much they will benefit in the long-term – after the gloss of a local funding handout has worn off.

Everyone has a potential place in this funding Nirvana. Lobby your local MP, and your local hospital or community health program might be the lucky health policy lottery winner!

Provided voters don’t see this as a cynical political exercise – and that is a big risk in an electorate which already ranks politicians low on the trustworthiness scale – then the new policy could be smart politics. We won’t know until the votes in next year’s federal election are counted.

In the meantime, given the drubbing the Liberals received in last month’s Victorian state election, the biggest challenge for the Morrison Government might be deciding which electorates are now marginal and worth shoring up.