If you are observant enough in the Australian bush, you may be able to spot the spade flower, a member of the violet family. Spade flowers grow under the semi-shade of open eucalypt forest, among other little green herbaceous plants.

This often-overlooked member of Australian flora hides some interesting secrets, including a rare chemical that may hold the key to turning regular plants into medicinal cures.

The common name spade flower refers to the flower’s shape, which is dominated by the spade-shaped labellum. Its botanical name, Hybanthus enneaspermus, is equally descriptive. The generic name Hybanthus means “humpbacked flower”, referring to the posture of the flowers. Meanwhile, the specific name enneaspermus means “nine-seeded”, because upon maturity each tiny 5mm fruit splits into three sections bearing three seeds each. 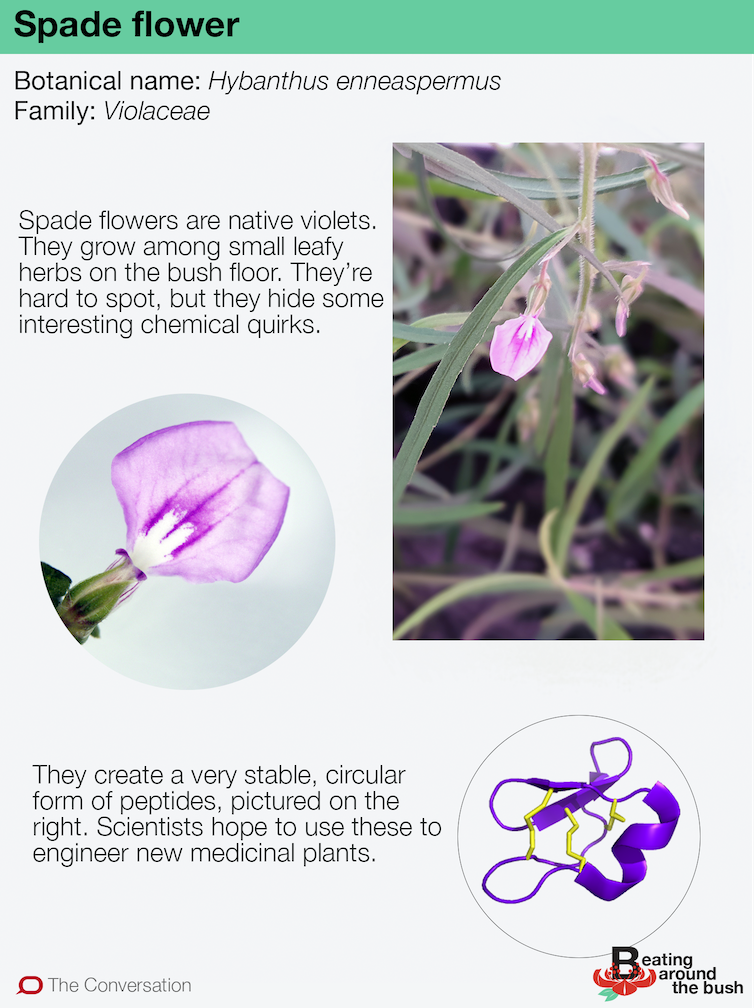 The Conversation Violets are familiar objects, from the showy native Viola banksii or the scent of European sweet violets. What is not common knowledge is that members of the Violaceae family produce some very curious molecules called peptides. People – and many other organisms – use peptides as signals that enable communication between cells and tissues. An example of a peptide messenger from humans with an important function is oxytocin, also known as the “love hormone”. Oxytocin regulates social bonding and other key aspects of our biology and sociality. In contrast, plants sometimes use peptides for a different purpose, as toxins to protect themselves from insects and other pests. But unlike most peptides, those produced by Violaceae are circular instead of linear. Because of this circular shape, they are highly stable in conditions that would degrade other peptides. This special class of peptides are called “cyclotides” and are only found in relatively few plant species. This is why we have been searching all across northern Australia, from the Kimberley region in Western Australia to the Queensland coast, for samples of native Australian Violaceae. The first cyclotide to grab the attention of scientists comes from an African plant called kalata-kalata, traditionally used in teas to hasten childbirth. In 2013, it was shown that a specific cyclotide from kalata-kalata acts on smooth muscle to cause contraction of muscle tissue. 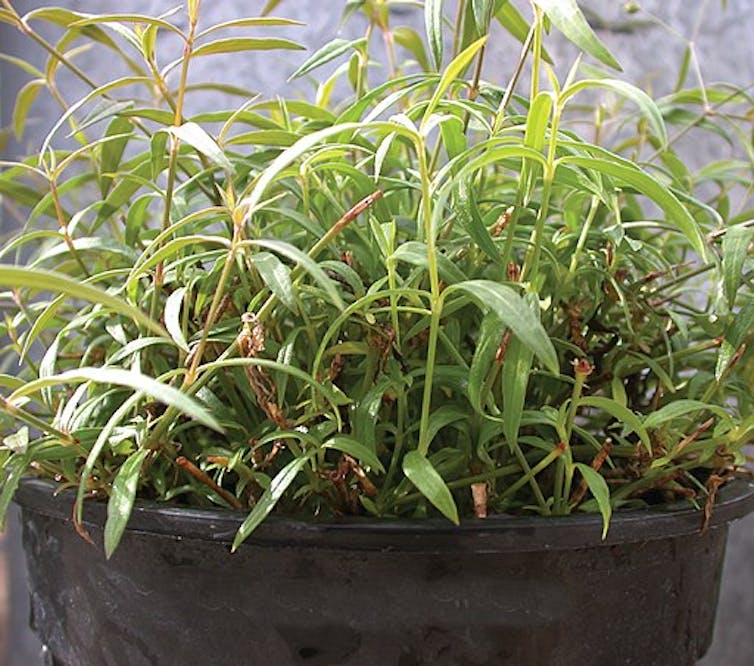 Kalata-kalata, or Oldenlandia affinis, is used in a traditional medicinal tea. It’s efficacy comes from the cyclotides it produces. KalataB1/Wikipedia But easing childbirth might not be the only effect cyclotides have. Initial experiments with spade flower extracts demonstrate a significant effect on the mating behaviour of rats. Rats treated with peptide-laden extracts from spade flower exhibit, uh, increased copulation frequency. In us humans, the receptors that detect peptides control libido, sleep, and other aspects of our biology. These observations leave spade flower cyclotides as prime suspects underpinning this amorous bioactivity, and could be the basis for coining yet another name for this plant: the “love shrub”. Despite this intriguing effect, until further scientific investigation validates these initial aphrodisiac findings and their basis, it is probably wise to steer clear of ingesting these plants. Spade flower is indigenous to Australia, but the native range extends through southern Asia, India, and into Africa. Despite the wide range of the species, the plant is usually distributed in a here-and-there fashion. In our experience this sparse distribution has meant finding no sign of them along the roughly 600km Gibb River Road at the end of the wet season, and just a single observation from a roadside south of Gladstone. This scarcity tests the resolve of many skillful plant spotters, ourselves included. 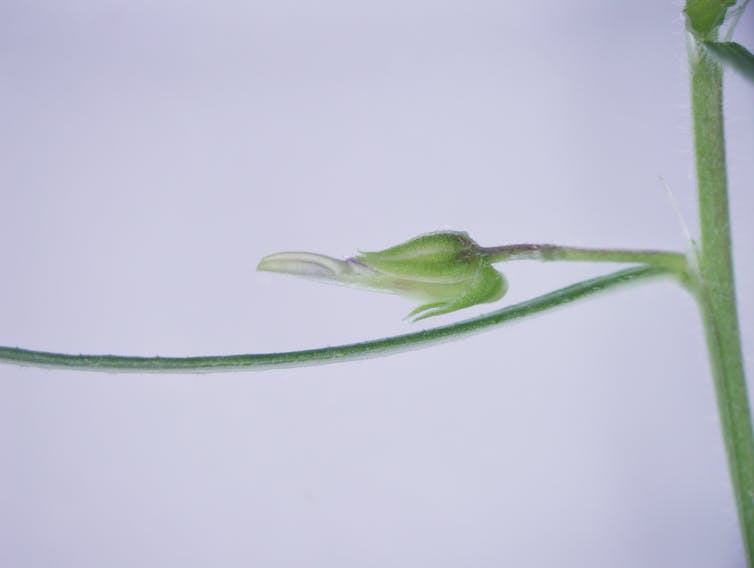 Spade flower buds are delicate and graceful. Author provided You’re most likely to find spade flowers in semi-shaded environments north of the Queensland-New South Wales border, along the east coast, and across the Top End. It grows along roadsides or near waterways, but it is difficult to spot because its narrow leaves tend to blend into the mix of herbs growing alongside it. Look for the lilac spade-shaped flowers among the understory herbs during the warmer and wetter months, but do this before midday when the flowers wilt away from view. There are other Hybanthus species in Australia, however the genus appears to be polyphyletic (meaning they are grouped together but don’t share a single common ancestor) so the genus is not truly representative of a single taxonomic group per se. Other Hybanthus species look similar to spade flower, namely H. monopetalus, which grows multiple purple-blue flowers on a single stem instead of single lilac-coloured flowers. In habitats between Brisbane and Sydney spade flower is scarce, however a similar and arguably showier species called H. stellarioides occurs. H. stellarioides is somewhat more delicate, but what really sets it apart are the bright royal orange flowers it produces in summer and autumn. 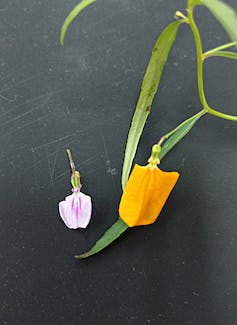 Spade flowers next to their flashier orange cousin, H. stellarioides. Author provided In many other aspects these two species look so similar that for some time H. stellarioides was considered a subspecies of the spade flower, however it is now clear they are genetically distinct. As part of Professor David Craik’s research group at The University of Queensland, we have sequenced the expressed genes of spade flower shoots and roots to uncover how these clever plants make cyclotides. These data helped explain spade flower’s cyclotide amino acid sequences. Armed with this information, the scientific community can now make stable designer peptides as potential pharmaceuticals. The Craik group is working on making modified cyclotides that can treat cancer and other diseases, and then reintroducing those genes into edible plants – turning a regular tomato plant into a medicinal plant for example. Learning how the spade flower makes cyclotides has already helped us to make some new cyclotides in other plant seeds. Read more: The mysterious Pilostyles is a plant within a plant Finally, this work facilitates the isolation of individual “love shrub” cyclotides to test their effects. Watch this space and the herbs underfoot. The humble and shy spade flower may have more surprises yet!