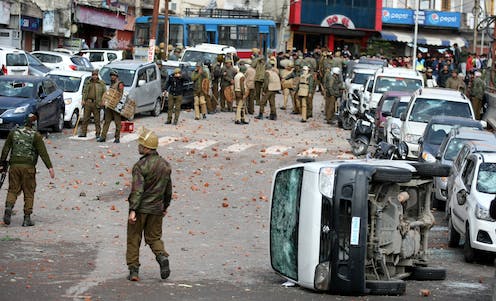 In February, a terrorist attack by Jaysh e-Mohammad (JeM) killed more than 40 Indian military personnel in the Indian state of Jammu and Kashmir. It triggered the worst escalation of India–Pakistan tensions for nearly two decades.

The flare-up was a stark reminder that the Kashmir conflict appears to be intractable, with especially dangerous consequences for the weaker party, Pakistan.

At great economic cost, Pakistan has constructed a nuclear-armed national security state over many decades to counter the Indian “threat”. This somewhat ossified approach has done little to improve security in South Asia.

It is also generating dangerous new threats to stability inside the country.

Read more: Nuclear war between India and Pakistan? An expert assesses the risk

The militarisation of Pakistan during the Cold War

Kashmir has been in a geopolitical limbo, with a disputed border, ever since partition in 1947. The conflicting Indian and Pakistani claims to sovereignty over Kashmir have helped generate the emergence of a Pakistani national security state in which the military became a dominant political actor.

The Pakistan military has received the lion’s share of national resources and began acquiring nuclear weapons during the 1970s. But it has also played a key role in framing Islamabad’s national security policy.

Because Pakistan was struggling to compete with India, which is much larger in terms of territory, population, economy and military power, it needed external support. The Cold War provided an opportunity for Pakistan to make an alliance with the US, which was looking to contain the Soviet Union in South Asia. In February 1954, the Eisenhower administration announced it was providing military assistance to Pakistan.

American assistance significantly strengthened the role of the military and enabled it to become the key actor in Pakistan’s foreign and security policy. The civilian bureaucracy cooperated with the Pakistani military in a pragmatic fashion to help it exercise political control during the Cold War.

The Pakistani judiciary provided legal justifications for military rule when required. Consequently, the Pakistani military ruled the country directly for 24 years from 1947 to 1988. During this period the parliamentary system was undermined and a “controlled democracy” became the norm.

Read more: India, Pakistan and the changing rules of engagement: here's what you need to know

The Pakistani military also used its political and administrative autonomy to establish its own commercial ventures. This included road building, real estate, cement factories and private banks. By establishing its own version of a military industrial complex, the Pakistani military assumed a dominant position in the country’s national security policies.

The Inter-Services Intelligence (ISI) emerged during the Soviet occupation of Afghanistan in the 1980s as a second key player. Civilian political parties or leaders in Pakistan were effectively constrained in national security decision-making by a military-led coalition that encompassed intelligence agencies, the civil bureaucracy and the judiciary.

The end of the Cold War did little to diminish Pakistan’s fixation with the Kashmir conflict. Its intense rivalry with India continued in South Asia, including in war-torn Afghanistan. But the post-Cold War era changed the strategic equation.

First, India embarked on a successful process of economic liberalisation in the early 1990s. This significantly widened the wealth gap between a rising India and a desperately poor Pakistan.

Second, the US no longer needed Pakistan after the Soviet withdrawal from Afghanistan in the late 1980s and drastically reduced its military support for Islamabad.

But the Pakistani national security state showed little willingness to adapt to the realities of a transformed strategic environment. Islamabad persisted with its involvement in proxy wars in Kashmir. It supported militant Islamist forces opposing the Indian presence and, in Afghanistan, it supported Taliban militants in a bid to counter Indian influence in that country.

In the post-Cold War context, Pakistan’s stance on national security has largely failed to balance India’s preponderance and generated significant new internal security threats from factions of Tehrik-e-Taliban (TTP) and other militant groups.

The war on terror and Pakistan’s dangerous double game

The 9/11 attacks helped restore Pakistan’s position as a key strategic partner of America in Washington’s war on terror. But the country’s national security state continued to pursue its anti-Indian agenda in Kashmir and Afghanistan, while ostensibly cooperating with US administrations in hunting down al-Qaeda terrorists in South Asia.

Osama bin Laden was eventually killed at a hideout inside Pakistan in May 2011, not far from a major Pakistani army base. This double game not only frustrated Washington, it also led to dangerous blowback at home.

Since the US-led war on terror, Pakistan’s internal security has been increasingly threatened by the activities of Taliban militants and the influx of al-Qaeda operatives into the country from neighbouring Afghanistan.

Over the past decade, Pakistan has experienced a gradual shift to more democratic processes. Nevertheless, the military has continued to play a dominant role in the making of foreign and security policy.

Today, Pakistan is a country in desperate need of peace and stability. But unless Pakistan’s national security state is reformed and brought under full civilian control, it is difficult to see how the country can reverse an ominous pattern of domestic instability and economic decline.