As the dramatic shutdown of major recycling company SKM this week has illustrated, recycling is not free.

Householders in Australia pay council rates for a recycling and garbage service. This fee is largely based on the costs of collecting, sorting and processing, and – importantly – what returns are likely from selling the end product.

However, since 2017 the price on the open market for mixed plastics has plummeted from about A$325 per tonne to A$100 per tonne. Mixed glass actually dropped to a negative value, which meant that generators were potentially paying for it to be taken away.

Read more: Indonesia has sent Australia's recycling home – it's time to clean up our act

On the other hand, prices for high-quality recycling (not mixed materials or items contaminated with food, for example) largely remained the same or slightly increased.

This shows the market for low-quality, poorly sorted recycling, which Australia has previously offloaded to China and other Southeast Asian countries, is ending.

Unless we improve our recycling industry, we must start sending more recyclable material to landfill – as is happening now in some Victoria councils.

So what can we do about it?

Reduction, fundamentally, comes before recycling. We need to avoid waste to begin with, in our homes and businesses.

As consumers, we should be vocal about seemingly contradictory practices by businesses. For example, supermarkets congratulate themselves on reducing plastic bags, but then use small plastic toys as marketing tools – not even making them out of recycled plastic. These toys are destined for disposal, potentially contaminating recycling streams, and not all consumers are happy. 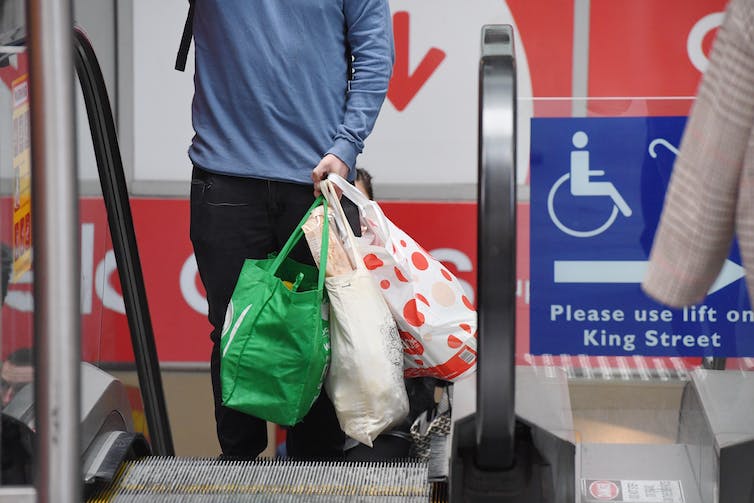 Coles and Woolworths have both congratulated themselves on ditching single-use plastic, but still use cheap plastic toys for marketing campaigns. AAP Image/Peter RAE

It’s tempting, if you don’t know whether something is recyclable, to simply put it in the yellow bin and assume someone on the other end will “sort it out”. But in reality, incorrectly recycled material can contaminate entire loads of otherwise valuable and useful recyclables, diverting it to landfill.

Fundamentally though, we as the generators of waste must assume a high degree of responsibility. We are the ones putting contaminants into the recycling system that everyone else in the management structure must deal with.

Read more: Australian recycling plants have no incentive to improve

It’s our job to familiarise ourselves with what can and cannot be recycled – although, to be fair, this can vary widely from council to council, and should be made easier to check.

If we can clean up the recycling streams, markets should increase and prices for these commodities will similarly rise. This encourages those in the sector to improve their plant technology, and for others to enter in what would then be a more competitive market.

Clean recycling still requires an established market to be profitable. Governments, as the single largest purchasers in Australia, can play an important role here.

The Victorian government has already committed to helping government agencies increase recycled content in their purchasing requirements. Other governments are doing likewise and this is a very positive step.

At a minimum, contracts and tenders should specify a certain level of recycled materials used in products sold to the government, or prefer those suppliers who do have recycled content.

Read more: We can't recycle our way to 'zero waste'

One innovative approach where governments can use their purchasing power is with the use of plastic and glass recyclables in roads. Trials have been extremely positive.

In fact, the Australian Council of Recycling has suggested that using recycled material in construction for the Snowy 2.0 scheme would consume all the recyclables generated in Australia.

We need to chew and walk gum

The most important message is, just as there’s no single person or sector to blame for Australia’s dismal recycling situation, there’s no single solution. We all need to take more care with what we put in the bin. Governments around Australia should incentivise local manufacturers to use domestic recycling.

Recycling companies should certainly improve their technology so they can produce higher-quality material, which can be sold at a profit.

And, as the current SKM debacle illustrates, governments need a plan B when the market breaks down.

Even with all of this, a sustainable domestic recycling industry is some way off. We urgently need to start doing the things we already know will work, rather than playing endless rounds of a pointless blame game.