Ooshies, the plastic collectible toys Australian supermarket chain Woolworths is using to lure shoppers to its aisles, aren’t just a bit of fun.

They’ve been connected to a black market among Woolworths staff, frenzied online trading replete with death threats, chaotic crowds and and feral behaviour at supermarket swap days, and a shocking decapitation live on breakfast television.

The plastic figures, based on characters in Disney’s new movie The Lion King, are aimed for kids but are really intended to sway the shopping habits of parents (you get one for every $30 you spend). They have inspired some very bad adult behaviour – with the worst behaviour arguably that of Woolworths itself.

Read more: It's Sarabi's pride, Mufasa just lives there: a biologist on The Lion King

The Woolworths Group proclaims “family-friendly values”. Just last month it announced it would get out of liquor and pokies. Yet it has targeted children with a manipulative promotion that relies, among other things, on the same psychological triggers that can promote gambling addiction in adults.

Collectible promotions are tried and true. We seem to be hard-wired to collect things. 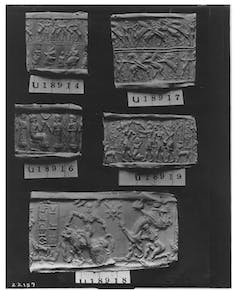 Some of the seal-impressions from the Ur excavation site. Ur Excavations Vol III

Among the earliest evidence of this human impulse is a large collection of seal-impressions in clay. Made with flat stamps or cylinder seals, they were found during the excavation of the Ziggarut of Ur, in modern-day Iraq, and date from 5th or 4th century BCE.

An estimated 30% of the population collect something, according to noted consumer behaviour expert Russell Belk. Among children, collecting is even more common. In one study, University of Nebraska researchers Menzel Baker and James Gentry interviewed 79 primary-school students and found 72 (more than 90%) had some kind of collection.

Collecting is connected to children’s natural curiosity. It’s a process of making sense of things through gathering and categorising. This can be seen in the enjoyment children get from counting and subdividing their collections into categories. Young children typically care more about the quantity of their collection than aesthetic considerations.

As they get older, more subjective values develop. Quantity becomes less important. This is what ultimately distinguishes the psychological motivation to collect from the compulsion to hoard, in which one is incapable of making an emotional distinction between what is valuable and what is junk.

So tending to a collection can be both enjoyable and educational. Coins or stamps, for example, can spark an interest in geography, history and other cultures.

But there are aspects that also make the urge to collect exploitable by marketers.

One is the way things form part of what psychologists call the “extended self”. As Russell Belk explained in his 1988 paper on Possessions and the Extended Self: “We cannot hope to understand consumer behaviour without first gaining some understanding of the meanings that consumers attach to possessions. A key to understanding what possessions mean is recognising that, knowingly or unknowmgly, intentionally or unintentionally, we regard our possessions as parts of ourselves.”

The extended self’s manifestation in possessions is particularly striking in young children, who take great comfort from favourite dolls, bears and the like.

Read more: Why and how retailers turn everyday items into 'must-have' collectables

Another unpalatable aspect that businesses exploit in marketing to children is the “thrill of the hunt” through the use of so-called “blind bags”.

An astounding range of toys are based on the child not knowing what they are going to get until they open it.

This practice makes use of intermittent reinforcement. When the outcome is uncertain, the process is much more exciting and a desired result much more pleasurable. It’s the same neurological mechanism that makes gambling so addictive.

Blind bags are highly conducive to marketers pushing sales through the scarcity principle, which makes some toys “more valuable”. In the case of the Ooshies, there are 24 different toys produced in different quantities. Some are very rare – there are just 100 “furry Simbas”, for example. 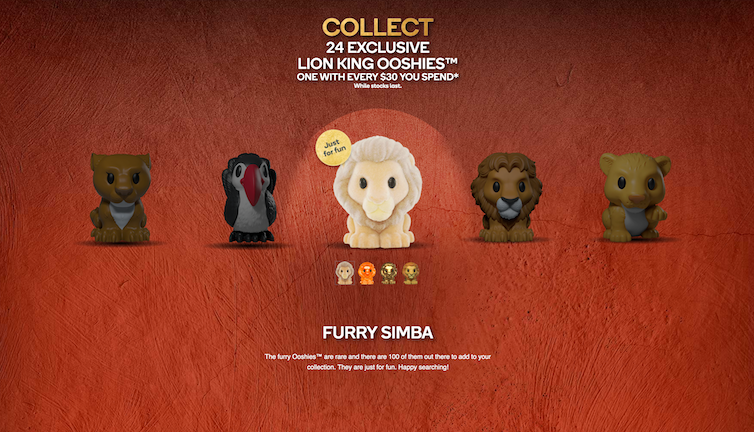 This can inspire strong fears of missing out in child peer groups, putting pressure on parents to secure missing toys.

Finally, younger children are innocent to the cynical ways of the world. They do not necessarily understand the persuasive intent of such sales promotions. Children, even adolescents, don’t necessarily have the cognitive skills to recognise the manipulative aspects. They are the soft target. As one mother of three has put it: “Like most, I hate the fact they’re exploiting our children, but at the end of the day my kids love The Lion King…”

For these reasons we believe the ethics of specifically targeting children with a collectibles promotional campaign are questionable – and the Ooshies promotion is unashamedly directed at children.

If Woolworths wants to celebrate family-friendly values, this is not the way to go about it.