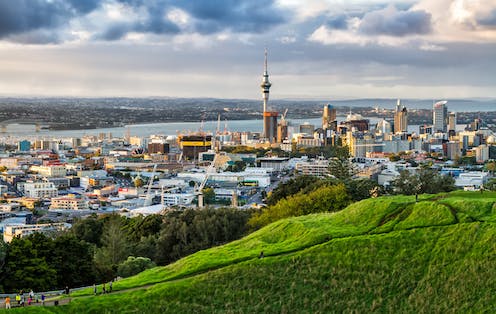 Public submissions opened this week for a major overhaul of the waterfront and centre of New Zealand’s biggest city, Auckland (Tāmaki Makaurau).

The Auckland Council’s upgrade plans highlight the importance of local Māori communities as a key part of the process, but my research shows that mana whenua (the Māori groups that hold authority over tribal land) have been displaced and marginalised.

To make more than a token gesture, the council’s plans will need to address issues affecting Auckland’s indigenous communities.

When British colonists first developed Auckland after Ngāti Whatua transferred an initial block of 3,000 acres of land in 1840, they had little interest in celebrating anything that related to indigenous communities. The primary agenda was to generate wealth and stability for the new settlement by exploiting the abundance of local resources that had become scarce in Britain.

Despite Treaty of Waitangi promises to protect Māori land, forests and fisheries, British control, reinforced by an imperial ethos of global expansion, has influenced education, land use and business practices in New Zealand over the past 150 years. This has physically displaced Māori from their ancestral lands and contributed to widespread ecological degradation.

To provide more economically lucrative pasture for sheep and dairy farms, settlers made “improvements” by burning large swathes of indigenous forests. In 1888, initially under the Kauri Timber Trading Company and from 1919 under the New Zealand Forest Service, thousands of ancient tōtara, kauri, rimu and awa trees were extracted until the supply ran out.

The combination of timber extraction and forest burn-offs for farmland contributed to ecological degradation, the extinction of native birds and marginalisation of indigenous flora and fauna. Dairy and sheep farms continue this ecological degradation through the loss of biodiversity, methane emissions and pollution of rivers and shorelines.

These activities have affected ecosystems and the well-being of indigenous communities. Although #GoodMorningWorldNZ ad campaigns promote New Zealand as “pure”, our prosperity and wealth are reliant on industries that are toxic to all things indigenous.

Colonisation has displaced Māori from their ancestral lands, which has impacted on their economic, cultural and spiritual well-being. Our land use practices have degraded local ecosystems, leading to the extinction of many species.

The adverse impact of our wealth-generating activities is evident in data published in Environment Aotearoa 2019, which notes that two-thirds of New Zealand’s rare ecosystems face extinction.

Coupled with this, Aotearoa has a serious issue with homelessness. The prevalence of homelessness has grown by 15% since the 2006 census. In 2013, at least 41,000 people were homeless, or about one in every 100 New Zealanders. And, if you walk down Auckland’s Queen Street, it is obvious Māori are over-represented in the homeless population.

Māori now own around 5% of land in Aotearoa. More than 95% of Māori are displaced from their ancestral lands or unable to build on their land. Obstructive legislation limits options for building Māori-centred developments within urban areas or on Māori-owned land in rural regions. The spatial marginalisation of Māori communities, particularly from maintaining tribal ownership of land in urban or economically productive areas, has generated ongoing intergenerational trauma and poverty.

Māori have not only lost their land and access to local resources that traditionally sustained them for centuries prior to colonisation. Māori men are also disproportionately incarcerated and Māori children disproportionately placed into welfare care.

Colonisation is not something that happened in the past. It continues to adversely affect Indigenous communities and local ecologies in countries with a colonial history.

It is within this context that we need to consider what positive outcomes there will be for Māori based on the Auckland Council proposal, which promises to work closely with mana whenua (people of the land).

A range of unique initiatives and developments will provide all Aucklanders and visitors with a deeper understanding of mana whenua histories, associations and aspirations within the city centre and waterfront. Collaboration, innovation, creativity and the direct involvement of mana whenua will develop and deliver a thriving Māori culture and identity for the area, from which Aucklanders and visitors will benefit.

While the council promises to develop projects that enable the public to have a deeper understanding of mana whenua histories, it is important to consider how this will address the real economic and spatial injustices associated with the ongoing displacement and marginalisation of indigenous communities.

The impact of this loss is intergenerational. Telling stories about our histories won’t guarantee that Māori have the same access as other citizens to well-paying jobs, good schools, medical care and an ability to accumulate intergenerational wealth through property ownership. To arrive at more than a token inclusion of Tāmaki Makaurau’s mana whenua, the discussion needs to address these inequalities.