Many parents and educators agree children need to take risks. In one US study, 82% of the 1,400 parents surveyed agreed the benefits of tree-climbing outweighed the potential risk of injury.

Parents cited benefits including perseverance, sharing, empowerment and self-awareness. One parent thought it allowed her son to learn what his whole body was capable of.

Read more: Should I let my kid climb trees? We asked five experts

Taking risks and succeeding can motivate children to seek further achievements. Failing can lead to testing new ideas, and finding personal capabilities and limits. In this way, children can overcome fears and build new skills.

We mentored a group of educators in a research project trialling how to best introduce kids to risk. 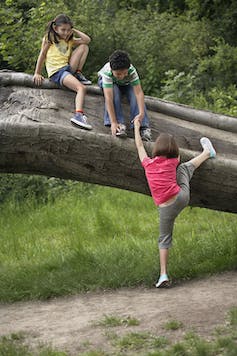 Parents identified sharing and collaboration as one benefit of letting kids climb trees. from shutterstock.com

Parents can use some of the lessons these educators learnt to help their own children take more risks and challenge themselves.

What was the research?

Adamstown Community Early Learning and Preschool (NSW) wanted to conduct research around risky play. “Risky play” is a term which has evolved from a trend to get more children out into nature to experience challenging environments.

Adamstown wanted to find out whether adult intervention to promote safe risk-taking would play a significant role in developing children’s risk competence.

The educators examined their practices in these areas to see how and whether they were engaging children in risky play, and how children were responding. 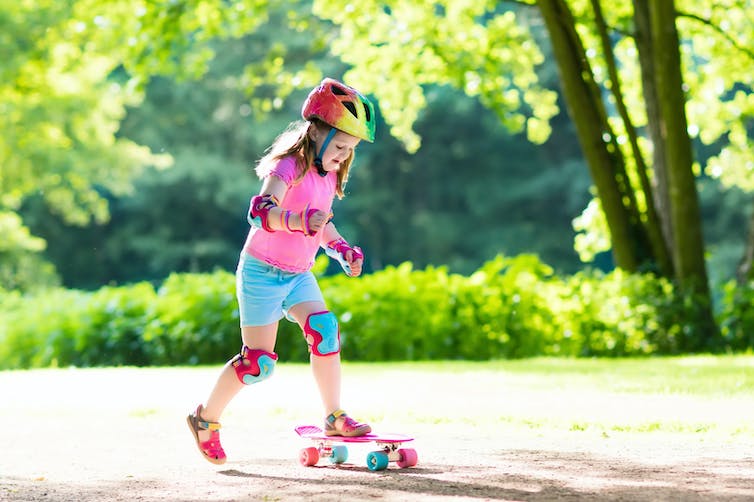 Skating down a hill is one way kids can engage in risky play. from shutterstock.com

Here are five lessons educators learnt that parents can apply at home.

1. Have real conversations with children (don’t just give them instructions)

Adamstown educators found children were more likely to attempt risky play when adults talked to them about planning for, and taking, risks.

Parents can use similar strategies with their children, helping them question what they are doing and why.

That knife is very sharp. It could cut you and you might bleed. Only hold it by the handle and cut down towards the chopping board.

You cut the cake, thinking about how you held the knife and didn’t slip or cut yourself. Well done!

It is important for children to provide insight into their own problem solving. You could ask their thoughts on what might happen if they used the knife incorrectly or what safety measures they could put in place. This will help develop their risk competence.

Allow your children to try new things by slowly increasing the levels of difficulty.

At Adamstown, a process of introducing children to fire spanned nine months. First – on the advice of an early childhood education consultant – they introduced tea-light candles at meal times. This then moved to a small fire bowl in the sandpit, before children were introduced to a large open fire pit.

Read more: Ensuring children get enough physical activity while being safe is a delicate balancing act

The fire pit is now used for many reasons. In winter, children sit around it in a circle and tell stories. Educators show them cooking skills, referencing the ways Australia’s First Nations People cook. The fire pit is also used to create charcoal for art. 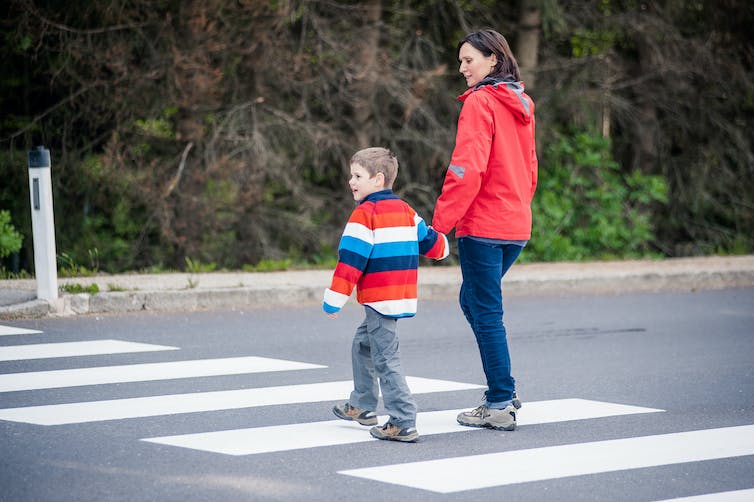 Encourage your children to think about risk when they’re in a safe situation. from shutterstock.com

Children have been made aware of the safe distance they need to keep and about the potential hazard of smoke inhalation.

During the research process, as children were introduced to more risk, there were no more injuries than before and all were minor. There were also no serious incidents such as broken bones, or events requiring immediate medical attention.

3. Assume all your children are competent – regardless of gender

Adamstown educators were surprised to discover that, although they weren’t excluding girls from risky play, the data indicated they challenged and invited participation more often with boys.

Parents may hold intrinsic biases they are not necessarily aware of. So, check yourself to see if you are:

4. Be close-by but allow children to have a sense of autonomy

Children don’t always want to be supervised. Search for opportunities to allow them to feel as if they are alone, or out of sight. Be close-by, but allow them to think they are playing independently.

5. Discuss risk at times that don’t directly involve it

When walking together to the shops, talk about the risks involved in crossing roads, such as fast cars. You can note safe and unsafe situations as well as encouraging your child to notice these as you go about your daily life. This can also be done in relaxed situations like in the bath.

This way, when the time comes for your child to learn a new skill like crossing the road alone, they have already had some opportunity to consider measures to keep themselves safe in a non-stressful situation.

If your child has a fall or other mishap, when everything is settled again, ask your child about why it happened and how they might suggest it could be prevented next time.

This article was written with Kate Higginbottom, Service Director and Nominated Supervisor at Adamstown Community Early Learning and Preschool Centre.

The Adamstown centre was part of a larger research project, in which four Australian early childhood centres in Newcastle took part as practitioner researchers.