Regular exercise is important for Indigenous women’s health, as it protects against obesity and chronic conditions such as heart disease and diabetes. These conditions are more prevalent among Aboriginal and Torres Strait Islander people than non-Indigenous people.

Women’s physical activity benefits whole communities. Active mothers and aunts are important role models for their children and peers; while women’s involvement as sport leaders, coaches and participants can empower Indigenous girls to participate in sports at community to elite levels.

Read more: Why are so few professional sport coaches from Aboriginal and Torres Strait Islander communities?

Yet participation is low. In 2012, only 23.3% of Indigenous women played sport, walked for fitness or leisure, or were physically active in the previous 12 months. This compares with two-thirds (66.7%) of non-Indigenous women.

More recent statistics are difficult to come by, but the subject of low physical activity rates for Indigenous Australian women has long been of concern and was a major focus of a parliamentary inquiry in 2013.

What are the barriers to participation?

Prior to colonisation, physical activity was intertwined with women’s lives through activities such as gathering food and swimming.

Despite this rich history, women’s participation in sport and physical activity has decreased over time for a number of reasons.

For some older Indigenous women we interviewed for our research, past racist beliefs and practices continued to inhibit them. One woman recalled not being able to learn to swim as a child at her local pool. This was back when Australian pools were sites of segregation. Now, as an adult, she is too scared to learn.

Read more: Are sports programs closing the gap in Indigenous communities? The evidence is limited

Racism or vilification based on skin colour continues to affect Indigenous women’s involvement in sport, with many of our participants describing negative and hurtful experiences.

For women living in remote Indigenous communities, transport costs and logistics significantly impacted their participation in organised sport. The costs of registering for a sporting team, for example, and having to purchase a team uniform meant they were unable to compete.

Ongoing effects of colonisation have resulted in some women rejecting calls for them to become involved in “westernised” sport, instead preferring activities that are more culturally acceptable, such as music and crafts. 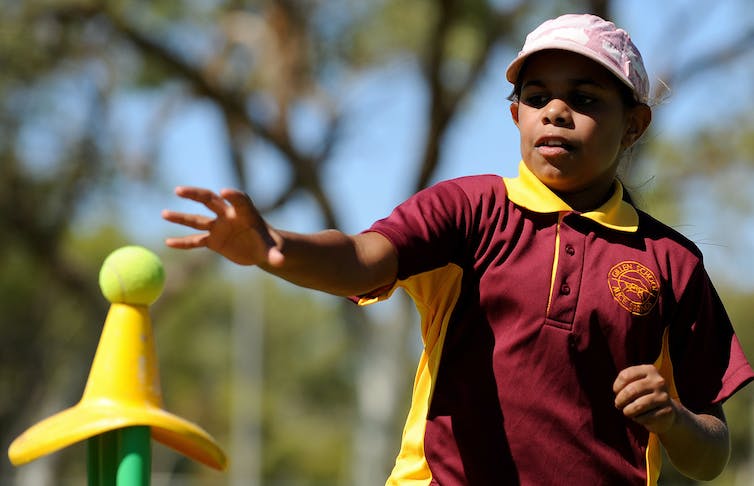 Our research also found that some Aboriginal people viewed time spent participating in sport and physical activity as “selfish” because it took them away from their family care commitments and responsibilities.

These traditional roles tended to typecast Indigenous women as “enablers” or “helpers” for others, rather than as sport participants. So women often took on non-participatory roles at the canteen or BBQ, for instance, or facilitated sport for the children or men in their families.

Such programs are more likely to succeed if they are family-friendly and community-based, as Aboriginal women participate at a greater rate when activities include their friends and peers.

Indigenous-women-only classes and activities offered by local Indigenous organisations were also valued for their cultural safety. These were comfortable spaces and a place for activity and respite.

Second, scholarship opportunities for Indigenous boys have facilitated their participation in elite sport, particularly the AFL and NRL. Similar programs should be developed for Indigenous girls.

Read more: In both schooling and sport, Australia has slowly come to recognise its Aboriginal talent pool

Having information about the number of steps they walked and buzzing activity reminders increased daily physical activity and had positive impacts on women’s mental health.

These research findings underscore the importance of empowerment. Programs and interventions foisted on Indigenous women are unlikely to benefit them as individuals or their communities. Instead, healthy and active sisters and aunties are powerful role models.