With cries of “Quexit!” still echoing faintly in our ears, Queenslanders head towards a state election in October.

For many, interest lies in whether federal Labor’s poor showing in Queensland at last year’s national election was a portent for the state Labor government. While there’s plenty at stake locally, recent National Party disunity and federal Coalition turmoil could also have a pronounced influence on Queensland’s election year.

Interestingly, latest polling figures put Annastacia Palaszczuk’s government and the Liberal National Party opposition neck and neck. After a turbulent last six months for Palaszczuk, questions are being raised about a lack of “cut-through” by LNP leader Deb Frecklington. Underlying it all is apparently growing voter indifference to both. Their leaderships will undergo a litmus test at a coming Gold Coast by-election on March 28.

Read more: Queensland to all those #Quexiteers: don't judge, try to understand us

Palaszczuk’s government has had to contend with a sluggish domestic economy and diminished state finances. This is on top of persistently high unemployment, which is most severe in the regions and for young people. Add recent natural disasters, tourism downturns, infrastructure project delays and contentious protest laws, and the outlook for the second-term government isn’t altogether rosy.

Compounding these troubles, Palaszczuk’s popularity has fallen, mainly due to transparency questions arising over Deputy Premier Jackie Trad’s property dealings and perceived conflicts of interest. The “integrity issue”, on which the premier campaigned coming to office, will provide fodder for the opposition and a critical media as the election nears.

Simultaneously, Frecklington has endured her own “summer to forget”, much like the prime minister. Missteps ranged from scandals involving Young LNP members, to the opposition leader’s clumsy attempts to belittle the premier over her attire. Most damaging was the sudden resignation of long-time Currumbin MP Jann Stuckey. Ahead of a March by-election, Stuckey has criticised her party’s “bullying” culture and overbearing party executive. 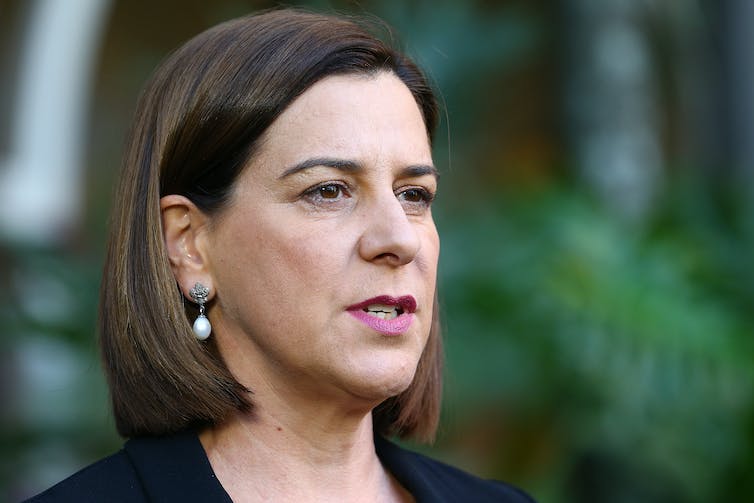 Like the prime minister, Queensland Opposition Leader Deb Frecklington has had a summer to forget. AAP/Jono Searle

Anything less than a convincing by-election result will heighten pressure on Frecklington’s leadership, with whispers emerging of a desire for change at the top. A messy leadership swap would again expose an uneasy relationship between the LNP’s constituent Nationals and Liberals, and repeat the party’s tendency to electorally self-implode.

Similar fractiousness is writ large in Canberra, with ongoing fallout from Barnaby Joyce’s failed attempt to take back the National Party leadership. Nationals MPs angered by leader Michael McCormack’s handling of the Bridget McKenzie scandal – including a number from Queensland – again want to more forcefully exert their party’s identity, separate from the Liberals.

While not all Queensland Nationals supported Joyce’s move, the resignations of Matt Canavan from the government front bench and now Llew O’Brien from the Nationals party room underscore the regional restlessness in their ranks. With speculation of a “breakaway” LNP faction splitting in the Nationals party room, “identity politics” could cause a rift within Queensland’s Liberal National Party. Scott Morrison’s “how good is Queensland?” election-night shout-out might come back to haunt him.

Read more: Grattan on Friday: Morrison can only look on as Nationals 'wicked problem' damages his government

It’s easy to view this as another case of the LNP’s Queensland-centric focus disrupting the Coalition relationship. This episode bears the hallmarks of last year’s move by “rebel” Queensland Nationals to pressure party colleagues and Liberal partners on government support for new coal-fired power stations in their state.

Beyond the damage done to Coalition relations, this “coal posturing” could lead to a similar schism in state LNP ranks, with MPs and candidates campaigning in regional mining seats potentially at loggerheads with city-based colleagues over energy generation. Not for the first time, federal Coalition MPs might wonder at the wisdom of forming the merged LNP in Queensland over a decade ago.

Amid Coalition MPs’ fragmented views on coal and climate change, Pauline Hanson has called for the Senate to “recognise the value of new coal-fired power stations” in Queensland. Characteristically, Hanson is playing the stirrer and opportunist nipping at, especially, the Nationals’ heels.

Her One Nation party, perennial bogeyman for the major parties but so often an election underachiever, holds a single seat in Queensland’s 93-member parliament. Expect further attempts to exploit frailties in both Labor’s and the LNP’s standings in regional and outer metropolitan electorates.

Katter’s Australian Party will also look to capitalise on regional disaffection with the major parties, although likely confined to a handful of northern seats. Still, if the party maintains or adds to its current three state MPs, it could stake a claim for regional Queensland in potential minority government negotiations.

In a similar vein, the Greens will look to take advantage of policy ambiguity in Labor’s “balancing act” around support for coal-mining projects and jobs in the regions. The ALP federal election review identified mixed messaging on these issues as a major campaign pitfall. The Greens will hope to add to their sole state MP at Labor’s expense in “anti-Adani” inner Brisbane.

Apathy towards both major parties, similar to that witnessed at the 2017 election, seems to pervade Queensland’s politics at the moment. “Status quo” may ultimately remain the order of the day.

Refreshingly, there’s no element of surprise to the timing of this year’s state election, with Queensland’s elections now fixed to the final Saturday in October. From this election, also, Queensland’s government will enjoy the “luxury” of a four-year term in which to implement its agenda.

With just over eight months until polling day and plenty at stake for competing parties, the contest is well and truly on, with implications for federal politics as well.