We feel that we live in the present. When we open our eyes, we perceive the outside world as it is right now. But we are actually living slightly in the past.

It takes time for information from our eyes to reach our brain, where it is processed, analysed and ultimately integrated into consciousness. Due to this delay, the information available to our conscious experience is always outdated.

So why don’t we notice these delays, and how does the brain allow us to feel like we are experiencing the world in real time?

Read more: Why a computer will never be truly conscious

We’re living in the past

Consider catching a ball. It takes several dozen milliseconds for information from the eye to reach the brain, and about 120ms before we can take actions on the basis of that information. During this time the ball continues to move, so the brain’s information about where the ball is will always lag behind where the ball actually is.

In sports such as tennis, cricket and baseball, balls travel at speeds well above 100km per hour, meaning the ball can move more than 3 metres during this lag time. Clearly, if we perceived the ball’s position on the basis of the most recent information available to the brain, we would never be able to catch or hit it with any accuracy at all. So how does the brain let us see where the ball is, rather than where it was? 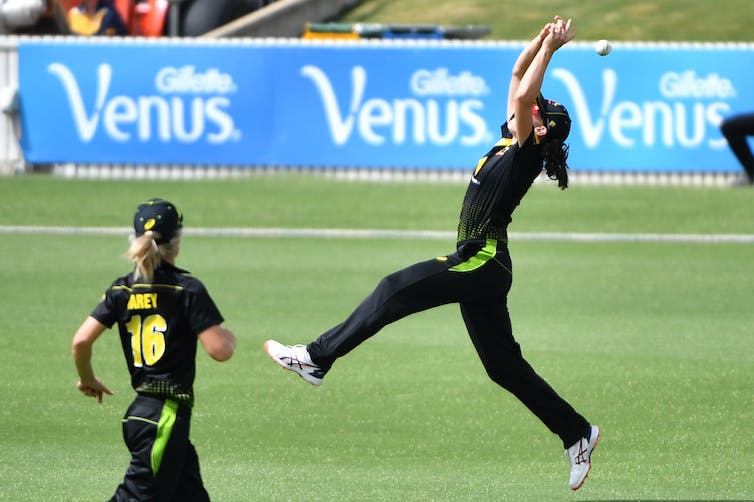 In sports such as cricket, a ball can move over three metres in the time our brains need to notice it and take action. Our brains are always operating on delay. AAP/Mick Tsikas

We investigated this question in our study, published today in Proceedings of the National Academy of Sciences. We showed participants moving objects and recorded their brain activity. We suspected the brain might solve its delay problem by making predictions. In the case of a moving object, it might extrapolate the object’s position forward along its perceived trajectory.

If that were true, we reasoned, then it should overshoot when an object suddenly disappears. After all, it would take time for the brain to “discover” that the object was gone, and during that time it would continue extrapolating. As a result, the brain would briefly “see” the object beyond the point where it disappeared.

Read more: How our unconscious visual biases change the way we perceive objects

The brain predicts before the eyes see

This is precisely what we observed in our brain recordings. When a moving object suddenly disappeared (for example, by moving clockwise in a circle and disappearing at the 12 o'clock position), our recordings showed that for a while, our participants’ brains acted exactly as if the object was still there and still moving, in the 1 o'clock position.

We also investigated what happens when an object changes direction rather than disappearing. As before, we reasoned that the brain would not know about the change in direction until it received that information from the eyes. It should therefore overshoot again, extrapolating the object beyond the point at which it changed direction. When the brain then discovers where the object actually went, it would have to catch up. 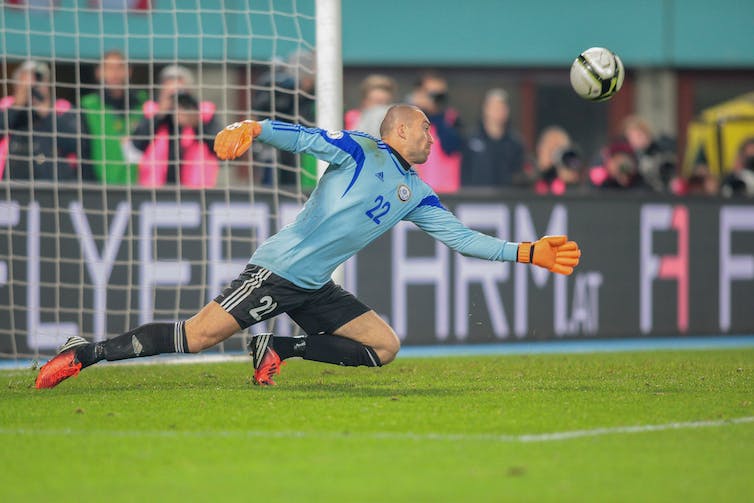 When a ball changes direction, our brain presumes it will continue along its old trajectory until it receives new information from the eyes. This can take up to 120 milliseconds, which is often too late for a despairing goalkeeper. Shutterstock/Herbert Kratky

Our brains rewrite our own history

Our recordings again showed exactly that. When the object suddenly changed direction, it took a while before the brain found out. During that time, it continued extrapolating the object’s position along its original trajectory. When the information about the object’s actual position finally arrived, the original prediction was quickly overwritten. The brain covered up its mistaken predictions.

Read more: Curious Kids: how can we see what we are imagining as well as what's in front of us?

This cover-up is intriguing because the brain is essentially rewriting its own history. It is saying “the object was never here” after having placed it there itself. And daily experience tells us this cover-up is very effective. After all, when we look at a ball bouncing on the floor, we don’t see the ball move beyond the floor.

Or do we? Our results suggest that, perhaps very briefly, we do see moving objects in their extrapolated positions before our brains discover their mistakes. So for a very short amount of time, we would see a ball bouncing through the floor. But when that turns out to be wrong, our brains – in true Orwellian style – hastily cover their tracks and insist that they have always known where the object actually was.