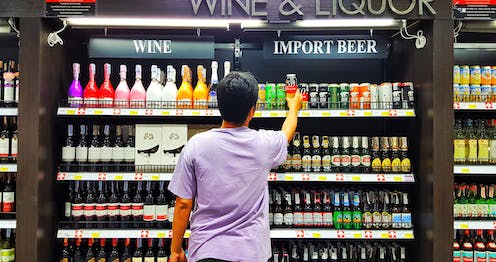 New Zealand has won international praise for its strict lockdown conditions and public health response to COVID-19, but there’s one glaring blindspot.

Last month, the World Health Organization released a new factsheet on alcohol and COVID-19, warning that heavy alcohol consumption increases the risk of respiratory failure, one of the most severe complications of COVID-19.

Yet alcohol was sold as an essential item, along with food, during New Zealand’s level 4 lockdown, even though almost half of all alcohol in New Zealand is drunk in heavy and binge drinking sessions.

While this isn’t a simple health issue to address – and lockdown might not have been the time to do it – it is an issue we can’t ignore. Alcohol is a risk factor not just for COVID-19 but many other conditions, including cancer.

Read more: Coronavirus: it's tempting to drink your worries away but there are healthier ways to manage stress and keep your drinking in check

The World Health Organization on alcohol and COVID-19

The World Health Organization’s comprehensive factsheet stresses that alcohol weakens the immune system and heavy drinking increases the risk of acute respiratory distress syndrome, which leads to widespread inflammation in the lungs.

This link between heavy alcohol consumption and respiratory disease is not well known, despite a systematic review, published in 2018, which concluded there is comprehensive evidence for it.

It is missing from the burgeoning research effort to quantify other COVID-19 risk factors such as smoking.

This global health blindspot is reminiscent of the lack of awareness of alcohol as a cause of cancer, even though the WHO’s International Agency for Research on Cancer stated in 2011 that alcohol is a class one carcinogen – meaning it’s a known cause of cancer.

Despite this, alcohol supply was an essential service during New Zealand’s lockdown. This raised concerns, but they focused largely on the increased risk of intimate partner violence and likely impact on families in stressful lockdown situations. Potential effects on drinkers, such as an increased risk of dependence, were also discussed – but not the health risks from heavy drinking specifically associated with COVID-19.

Read more: How the coronavirus is putting our relationship with alcohol to the test

So why did the New Zealand government decide access to alcohol was essential during the lockdown? Given wine and beer are sold in supermarkets in New Zealand and supermarkets were selected to operate as essential businesses, it was unlikely wine and beer sales would be restricted - although some countries such as Thailand have banned alcohol sales.

The question for New Zealand then became one of access to spirits and ready-to-drink premixed alcohol beverages. These have never been sold in supermarkets, but the decision was complicated by the fact there are some geographical areas, known as Licensing Trusts, where alcohol is not sold in supermarkets but only through local bottle shops.

One option would have been to allow only beer and wine sales from Licencing Trust outlets to create a level playing field with supermarkets elsewhere, but the government chose not to do this. As a consequence, people travelled outside of their area to buy spirits.

The government then allowed online sales of alcohol, initially restricted to existing online-only alcohol businesses but then extended to other premises, provided they consulted with their local council authorities. This increased potential availability from about 250 online-only businesses to around 1,000 physical bottle shops. And social media were used to promote online sales.

Read more: How do we keep family violence perpetrators ‘in view’ during the COVID-19 lockdown?

Alcohol as an ordinary commodity

One element of the government’s decision to treat alcohol supply as an essential service will have been concern for business interests. A second may have been concern for heavy drinkers and the possibility of withdrawal symptoms if they could not access alcohol. The latter is questionable given ongoing beer and wine sales and the availability of addiction support services online.

A third element was undoubtedly a framing of alcohol as an “ordinary commodity”. But this is not how alcohol is consumed in New Zealand. Almost half is consumed as heavy and binge drinking (defined as eight or more cans of premixed alcoholic drinks for men, and six or more cans for women).

For heavy drinkers, premixed drinks are a source of cheap alcohol, and there is every reason to expect much of the spirits and premixed drinks ordered online during this current period of restricted access will be consumed in this way.

Heavy drinking contributes to several diseases that likely exacerbate the effects of COVID-19. The government’s decisions projected the idea of alcohol supply as an essential business, and it appeared to favour commercial interests over public health.

This approach has influenced New Zealand’s policy response for many decades, before the present government took office. Evidence-based recommendations made by the New Zealand Law Commission in 2010 and supported by subsequent inquiries have not been implemented, despite more than 800 deaths that can be attributed to alcohol and NZ$7.8 billion in costs each year.

Going forward into a post-pandemic world, we should learn from the government’s science-based response to the threat of coronavirus to inform our response to persistent and ongoing harms from the marketing and over-supply of cheap alcohol.