On 22 January 1856, an extraordinary event in Australia’s history occurred. It is not part of our collective national identity, nor has it been mythologised over the decades through song, dance, or poetry. It doesn’t even have a hashtag. But on this day in the thriving gold rush town of Castlemaine, two women took to the polls and cast their votes in a democratic election.

Two days later, Melbourne newspaper The Argus unwittingly granted one of them posterity, writing “two women voted – one, the famous Mrs. Fanny Finch”. Fanny Finch was a London-born businesswoman of African heritage, a single mother of four and is the first known woman to cast a vote in an Australian election.

Victorian women over the age of 21 (excluding Indigenous women) would not receive full unconditional suffrage until 1908. (Victorian Indigenous women were not enfranchised until 1965.) But Fanny Finch, as a local business owner who paid rates, was able to exploit a loophole in suffrage law that was yet to discriminate against gender or race.

The Municipal Institutions Act of 1854 granted suffrage to ratepaying “persons”. The loophole was eventually closed in 1865 when “persons” became “men”.

Frances Finch was born Frances Combe in London in 1815. At eight-weeks-old she was orphaned by her mother after a tryst with a footman ended in a pregnancy but no marriage proposal.

A cross-stitch sampler attributed to Frances Coombe (sic) in 1830 at the age of 15 suggests she understood both her parents to be free people of African racial heritage (although the UK did not free slaves unconditionally until 1838.) The London Foundling Hospital, where Fanny was accepted as an orphan, provided her with some protection against slavery as well as an otherwise inaccessible education and access to an apprenticeship scheme in “household duties”. 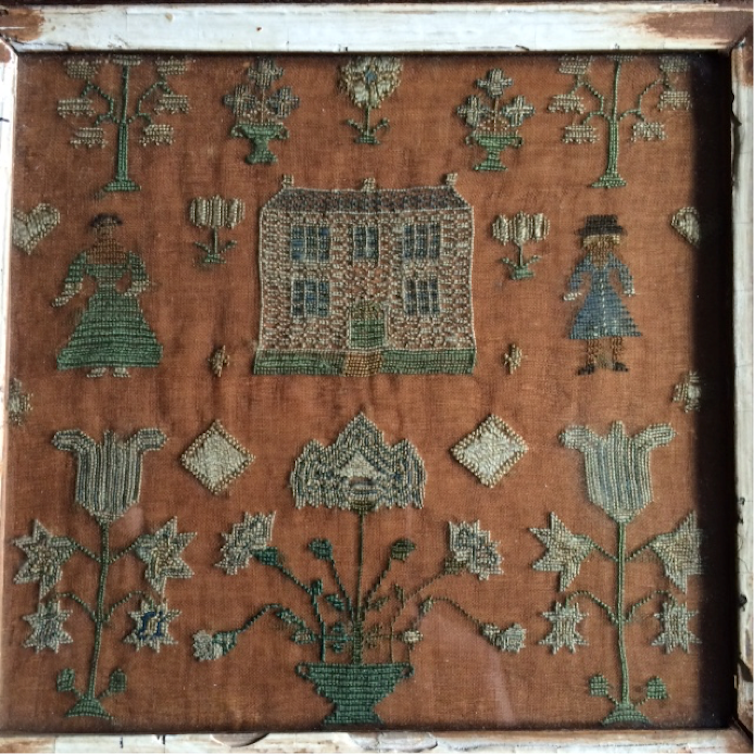 By 1837, a 22-year-old Fanny was a free, literate, educated, and experienced domestic servant. In that year she was approved a labourer’s free passage to the new colony of South Australia.

In Adelaide, Fanny was a valued employee of Julia Wyatt, an author, artist, and wife of the surgeon and first Protector of Aborigines, Dr. William Wyatt. Over the course of the next decade Fanny left their employment, married a sailor, Joseph Finch, and started a family.

By 1850, for reasons unknown, Fanny had left her husband. With her four children in tow, she made her way to Victoria. She arrived in the colony 12 months before the start of the Victorian gold rush. By early 1852 she was operating a restaurant and lodging house on the Forest Creek goldfields, alongside approximately 25,000 gold digging men and a handful of women.

There, in the fledgling township of Forest Creek, Mrs Finch’s Board and Lodging House became “the only one in which any person could get respectable accommodation”. By 1854, she had moved to nearby Castlemaine where she ran a restaurant. She quickly became one of its most recognisable faces.

Fanny was a successful businesswoman, known to dress in bright blue silk with her black hair adorned in artificial flowers. Strong and robust, with an even larger personality she was not one to shy away from attempting to remedy injustice when she saw it – be it with her words, her cooking or her fists. Evidently, she possessed visibility and power.

Her business acumen and conspicuity make it probable that her male contemporaries were unsurprised when they witnessed Fanny cast her vote at the Hall of Castlemaine (now the Theatre Royal). Did the men taunt her? Encourage her? Or were they complacent? We cannot know. We do know that no one stopped her. She selected her preference and signed her name. 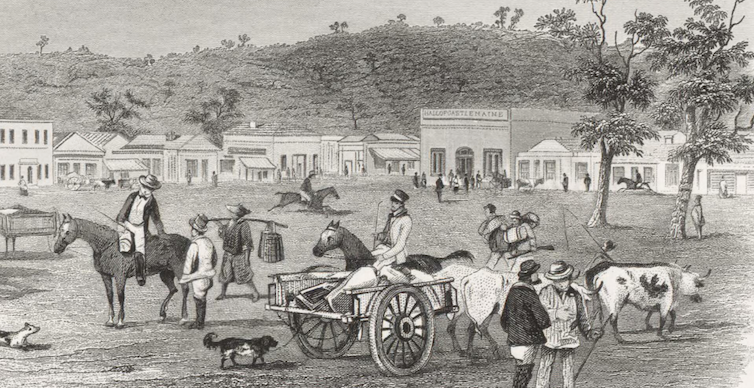 Market Square, Castlemaine, c1855. By S.T Gill. The Hall of Castlemaine where Fanny Finch cast her vote can be seen to the right of centre. Author provided

That afternoon, however, the two assessors of the day disallowed both Fanny and the other unknown woman’s votes. Their reasons were cited as: “they (the women) had no right to vote”. Further details were not divulged.

Still, Walter Smith, the man for whom Fanny voted, was elected to council. Smith was an agent and brewer who arrived at Forest Creek at around the same time as Fanny. Little is known about what motivated her to vote for him but no one else, despite being allowed to vote in seven councillors. She was clearly determined to elect him to council.

During colonial times women were rarely identified by name in the press – particularly women of the working class. The 1856 Argus report now offers historians an unprecedented opportunity to identify an otherwise invisible minority – the 19th century Australian woman of colour – as an active participant in our political history.

Fanny was a woman, who, through relative privilege – wielded with her own blood, sweat and tears – refused to founder beneath the weight of a white, Anglo-male world of commerce. However, this came at a price. As a woman of colour occupying space in a white man’s world, assaults on her success were not uncommon. Yet she refused to disappear.

One of those assaults occurred in December 1855. Fanny Finch was fined £50 for the illicit sale of alcohol, known as “sly-grogging”. After a month-long trial, which involved scandalous cross-examinations of miners, policemen, and even her two young sons, she was charged and fined.

Despite the exorbitant fine and the public slandering of her character and commercial integrity, Fanny Finch was not defeated. Like many business people on the goldfields, she both owed money and was owed it by others, but over the following four months, she began an unprecedented campaign of self-representation.

The day following her conviction she published a letter in the local paper accusing the local authorities of injustice (a copy of this has not survived). A month on, she cast that vote. Then a few months later in April, she published the following advertisement.

Mrs. Finch begs to inform the inhabitants of Castlemaine that henceforth she will carry on business for her children and would be happy to receive any outstanding debts … finding that the more she herself strives the more she is oppressed, although she can firmly state that if those who are in her debt would come forward each with one third, she will be relieved of all debt, have a good home for her family and about two thousand pounds in her pocket.

Fanny Finch also begs to state that as in her affluence she was so kindly trusted, they may be sure that she, from her own free will, may some day liquidate all, but she must have her time … and in spite of what enemies she may have, she intends to keep throughout the winter ready cooked Ham, Beef Soups (a la mode) from seven in the morning to seven in the night.

The vote of the famous Mrs. Fanny Finch adds a woman of colour’s voice to what Clare Wright has described as an unorganised movement for women’s rights during the 1850s.

Fanny died on the 15th October 1863, aged 48. She was remembered as “a strong minded woman” with “a genuine tenderness of heart, ever ready to serve another in distress … without the slightest ostentation”.

She was given a public burial in an unmarked grave at Castlemaine Cemetery.