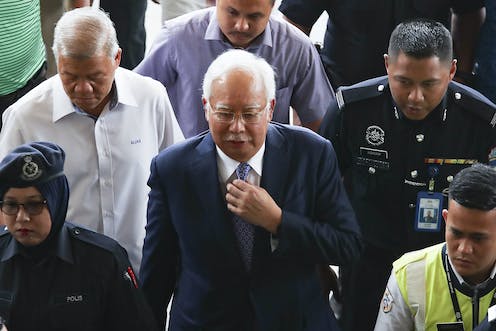 The corruption trial of Najib Tun Razak, the former prime minister of Malaysia, has finally begun following two postponements and an attempt on the opening day of the trial for a third. Many Malaysians were starting to wonder if Najib would ever get his day in court.

Najib’s lawyers have used every legal manoeuvre at their disposal to try to delay the trial as long as possible. These tactics verged on the ridiculous a month ago when Najib’s main lawyer claimed his pet dog had injured his wrist. The move worked – the former PM was granted another reprieve.

The trial over Najib’s role in a financial scam involving Malaysia’s 1MDB sovereign wealth fund will certainly not proceed smoothly, and the defence is sure to file new objections to higher courts to try to stop it again.

The reason Najib wants the trial delayed is simple: if he is found guilty, it will have a major impact on other upcoming trials.

His wife is also charged with money-laundering in connection with the scandal. (She’s accused of splurging on designer clothes and handbags during million-dollar shopping trips.) If Najib is found guilty, this would undoubtedly strengthen the case against her. Several ministers who served under Najib have also been charged with corruption.

Najib himself also faces several other trials related to the 1MDB scandal. For the government, the current trial is by far the simplest and easiest to prosecute. It involves 42 million Malaysian ringgit (A$14.5 million) that made its way from SRC International, a former unit of 1MDB, to Najib’s personal account. All these transactions occurred in Malaysia, unlike the other cases, which involve international transactions and multiple jurisdictions. The paper trial for this trial is straightforward.

Najib has pleaded not guilty to all charges and claimed the money in his accounts did not come from SRC International.

If Najib is found guilty, he will automatically lose his seat in parliament and face possible jail time. Being an MP gives him the platform to influence politics and say anything he likes against the current government, led by his political rival, Mahathir bin Mohamad.

Najib is already working on his political comeback – part of the strategy is to maintain a high profile as an MP through social media.

Najib tried to bolster his image with video of him singing a Malay version of The Manhattans’ 1970s song, ‘Kiss and Say Goodbye’

Many Malaysians want the trial to proceed without any more interruptions, because it would show the accountability process is finally working in Malaysia. Najib and his government were ousted from power in last year’s election because voters wanted the PM (and his wife) to face trial over the corruption allegations. Previously, it was understood that if you held a high political office, you were likely to get away with corruption.

If Najib isn’t convicted, many will likely wonder if there was any point to the change in power. The new government knows this and must deliver a credible trial. There is no other political option.

If Najib and his expensive lawyers are able to continue delaying the trial, Malaysians may start to lose faith with the new administration. Mahathir has publicly pledged to jail Najib for corruption before he hands over power next year to party leader Anwar Ibrahim, and if he cannot deliver on this, it will damage his successor’s political capital.

Read more: Now that Malaysia has a new government, the real work begins reforming the country

Najib may even try to delay his trials until after the next election, due in 2023, so he can continue to mount his political comeback.

Far more important for Malaysia, however, is the issue of political immunity. No previous leader has ever been charged with corruption and it is vitally important the rule of law is applied here for future generations.

This has regional implications, as well. Many activists in countries such as Singapore, Indonesia and Thailand see the Najib trial as a benchmark for tackling corruption in their own countries.

In many Southeast Asian countries, a culture of impunity persists at the highest levels of government. There is a belief among many political leaders that once they leave office, the sins they committed while in power will not lead to jail. It is as if this is one of the benefits of being elected to office.

In the coming days, expect more delay tactics by Najib’s defence team. The case might even be halted again due to a legal challenge on a point of law.

But given the stakes involved, I have no doubt the new Malaysian Attorney-General, Tommy Thomas, will make sure Najib’s trial goes ahead. Malaysia as a nation cannot have closure over the 1MDB affair until he is called to answer for his alleged crimes.