Australia heavily relies on the work of Indigenous rangers to meet our conservation targets, but they’re being short-changed by federal government funding.

And yet federal funding only offers them 6% of the conservation estate budget.

Many of our threatened species and ecosystems are based on IPAs. Most are located in remote parts of Australia, such as Uunguu on Wunambal-Gaambera country in the northern Kimberley, home to endangered species like the Northern Quoll.

Read more: Indigenous ranger programs are working in Queensland – they should be expanded

These areas are enormous, with just 74 IPAs covering more than 66 million hectares. Government protected areas also cover over 66 million hectares, but from a network of 7,204 smaller regions. Larger areas are generally better for conservation as they protect more habitats for species, but they also require more work to manage.

So why are IPAs given only a fraction of what they deserve?

Indigenous rangers are not supported

Unlike the Environment Department’s recurring budgets for staff and operations for Government Protected Areas, funding for IPAs is not secure.

According to the latest figures, the whole IPA program received only a total of A$50 million of federal funding for five years (2008 to 2013).

In northern Australia, for instance, A$16 million in funding was designated to manage 154,000km², supporting more than 650 Indigenous rangers.

Why, in outback Australia, where disadvantage is rife, are governments reluctant to adequately fund those jobs? Here are some possible explanations – none of them satisfactory.

The Indigenous Protected Area program is voluntary. Governments might be reluctant to fund permanent jobs when IPAs can be cancelled by Indigenous owners, although this is unlikely because they are looking after their country.

Funding and management fall under different departments. Management is under the jurisdiction of the prime minister and cabinet. Funding was transferred from the Natural Heritage Trust to the Indigenous Advancement Strategy in July 2018.

Priorities of the Indigenous Advancement Strategy are more aligned with welfare programs, including education, employment and health, but not conservation. 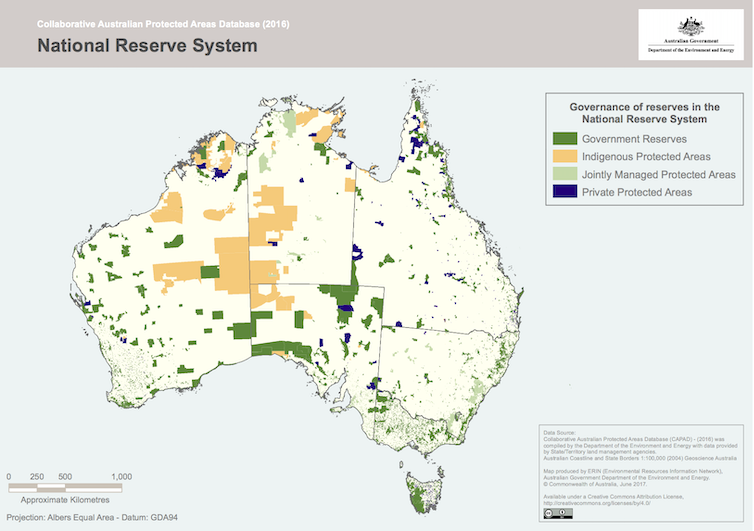 A federal government map of Indigenous protected areas across Australia. More have been declared since this map was published in 2016. Author provided

Managing conservation estate is meaningful and necessary work, which should translate to permanent, or at least long-term, jobs and operational budgets. Instead, funding is on a competitive short-term basis. IPAs have to compete for money within the National Landcare Program.

IPA “projects” are funded through multi-year funding agreements to fulfil their management plan commitments. The total funding for National Landcare was A$1.1 billion from 2017-21, including a meagre $15 million for new IPAs.

Government protected areas, on the other hand, have permanent staff, ongoing salaries and operational budgets (although Environment Department budgets have been slashed by over 40% since 2013).

Out of sight, out of mind

Then there is the remoteness factor – distance from the bulk of Australia’s east-coast population.

IPAs are out of mind for most urban Australians. But all Australians are affected economically and socially by Indigenous disadvantage, and disadvantage causes health, welfare and social costs to the national budget.

One way to help correct this imbalance is to seriously fund jobs Indigenous people want and we all need, such as the Indigenous Ranger Program.

Indigenous people on country express enormous pride in managing their IPA lands. They have meaningful work, identity and agency. 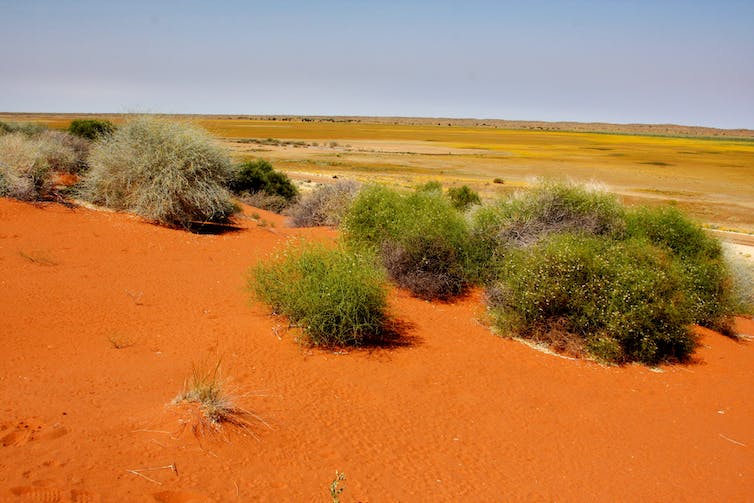 Many Indigenous Protected Areas are in remote desert areas where many native mammals have gone extinct in the last 120 years. They now protect many threatened species.

And Indigenous land managers are speaking out. Late last year, a comprehensive and ambitious book, Sustainable land sector development in Northern Australia, was published by a number of Indigenous and non-Indigenous authors who work in the north.

Indigenous land managers are now determining how their lands are used, how research is conducted and how Indigenous rangers and elders are engaged in the process.

Australia uses this Indigenous contribution to its benefit in international obligations, such as the Aichi Targets, to meet our target of conservation estate making up 17% of Australia. The Environment Department says 19.63% of Australia is protected, with a large proportion in remote deserts.

So, it seems unjust that much of this government’s “achievement” is thanks to Indigenous rangers who are committed to these outcomes, but are not funded adequately.

And in the lead up to the election, most party policies are unclear on Indigenous Protected Areas.

The Coalition has no specific published policies on Indigenous ranger programs nor IPAs. They are committed to development in the north of Australia, a policy that’s heavily criticised by Indigenous leaders.

The Labor Party fares better. They propose to expand “long-term support and recognition for the highly successful” Indigenous ranger and IPA programs and establish a First Nations Voice in government. They also recently committed to fund A$200 million to double the number of Indigenous Rangers over five years.

The Nationals are silent on Indigenous rangers, protected areas and employment. This is surprising for a regional party, where a high proportion of the lands are now Indigenous owned and managed.

The Greens are a little more advanced, addressing First Nations’ rights to lands and reparations by governments through acquisition and management.

Investment in the Indigenous effort to conserve Australia’s natural heritage is long overdue. And importantly, these programs must be led by Indigenous people themselves. They would provide meaningful employment and help to correct the social, health, welfare, chronic unemployment and economic imbalances in the far-flung regions of Australia.