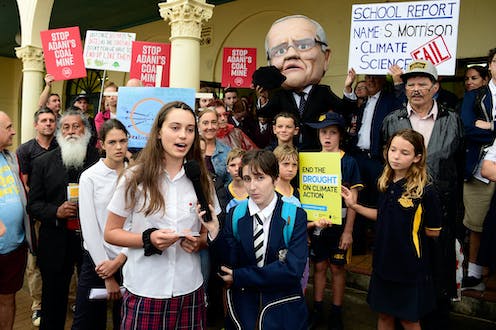 With the election campaign racing to its conclusion, there’s been a lot of talk about the impact younger voters will have on the result.

Some political leaders might view the potential voting power of young people with disdain. But it might be wise for them to listen more closely to the views of young people about why their trust of politicians is so low, and what needs to be done in order to gain the respect of younger constituents.

Since 2006, we have been conducting longitudinal research with a single-aged cohort of 2,000 young people. When the study commenced, our participants were aged 12-13 years old. They are now in their mid-20s. The information they have given us over the years offers some interesting insights into the attitudes and behaviours of young Australians.

Why trust is important

Trust in government is critical for the effective operation of a democracy. The Organisation for Economic Co-operation and Development (OECD), for example, identified trust as “one of the most important foundations upon which the legitimacy and sustainability of political systems are built” (original emphasis).

Our study found that participants’ trust in politicians has dramatically declined. In 2006, 29% of the cohort told us that they trusted politicians, but by 2017, that number dropped to 9%.

With maturity, many young people will develop a healthy degree of scepticism towards those in positions of power. But the instability of federal leadership over the past decade has left many young people disillusioned with politics and disappointed in the conduct of many politicians.

Revolving door of prime ministers is a problem

We conducted in-depth interviews with many of our research participants to understand the stories behind the statistics. The fact that four prime ministers have been deposed by their own party since 2010 has left an indelible mark on how participants view Australian politics.

In 2013, the participants were first-time voters, and we interviewed some about their political views. At that time, Kevin Rudd had just been returned as prime minister, and the Labor government leadership spills of 2010 and 2013 were playing strongly on the minds of our interviewees. They were unhappy with what they saw as being disloyal behaviour demonstrated by the actors involved in these events.

Six years later, our participants are again telling us they are disappointed with leadership change becoming a common feature of Australian politics. They are disheartened that there have been so many prime ministers and, although these young people are interested in many political issues, they are not interested in the levels of party infighting and bickering that have characterised Australian politics over recent years.

Read more: After six years as opposition leader, history beckons Bill Shorten. Will the 'drover's dog' have its day?

Qualities of a good political leader

With the quality of political leadership playing heavily on the minds of our participants, we asked what they want from the next prime minister.

The most common responses were stability and integrity. In terms of stability, they simply do not want to see prime ministers coming and going, as has been the case since 2010. They believe the next governing party must support their leader for the duration of the term that they are in government.

Integrity is also important. They would like the prime minster to act in the interests of all Australians and not just those who voted for them. They believe that a good leader has clearly identifiable values and advances policies that serve the broader public good.

Honesty is also important. They want a prime minister who will do what they say they are going to do. They are also looking for a leader capable of admitting when they are wrong, instead of making excuses and blaming others.

Read more: Against the odds, Scott Morrison wants to be returned as prime minister. But who the bloody hell is he?

Looking after the national interest

Somewhat unexpectedly, a recent poll found that New Zealand Prime Minister Jacinda Ardern is Australians’ most trusted politician. Her attributes are seen to include integrity, commitment, and relevance.

Interestingly, when we asked our participants if they could think of an Australian prime minister who had demonstrated any admirable attributes, the most common response was John Howard. This was irrespective of the party the young person supported. Although they might not have agreed with his policies, they appreciated that John Howard represented a level of stability that has not been seen since.

This may just be the key for national leaders after the election. While debates about policy are to be expected, young voters are ultimately willing to support leaders who are transparent, honest, and who will advance the national interest rather than the interests of their own faction or party.