On the western side of Mount Bartle Frere, the tallest mountain in Queensland, grows a tree that shares an ancient link to Australia’s most dominant plant group.

To get there, you must find a track hidden by rainforest and then walk for around an hour up and down a dirt path, until you reach cathedral-like giant red barked trees. This is Stockwellia quadrifida, also known as “Vic Stockwell’s puzzle”: a close but anciently separated relative of the eucalypts.

Read more: A detailed eucalypt family tree helps us see how they came to dominate Australia

This ancient tree is best suited for wetter and warmer environments, a throwback to when this continent was still connected to South America and Antarctica 40-50 million years ago, in the supercontinent Gondwana.

But this rare plant is now at risk by an introduced threat, myrtle rust, a plant disease that was accidentally introduced to Australia from South America. 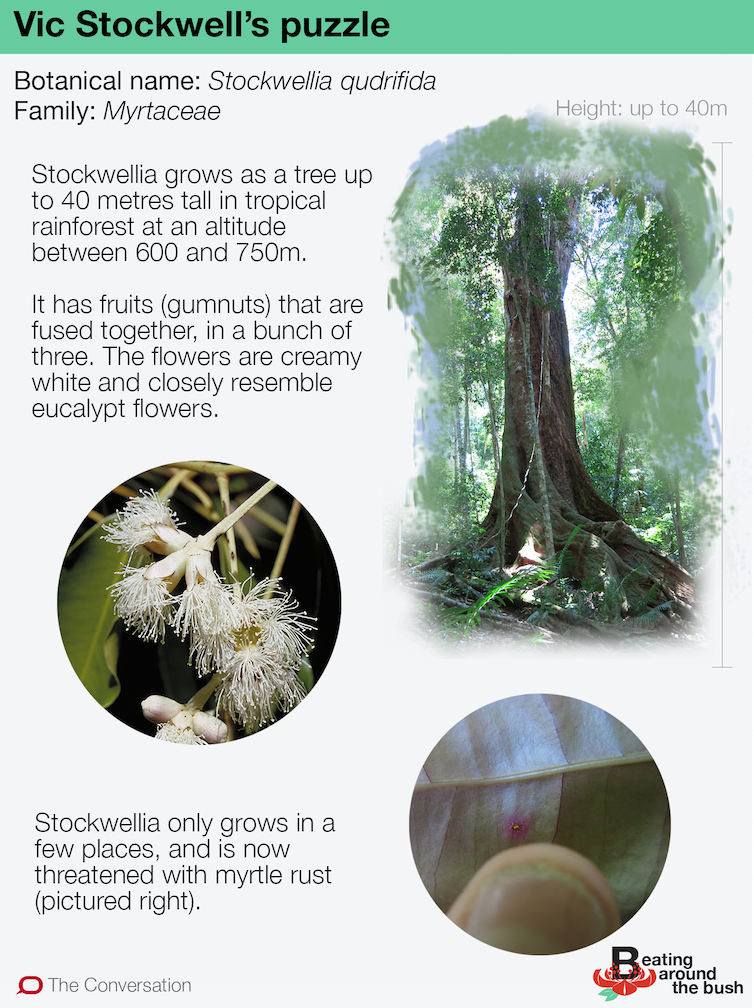 Sister to the eucalypts

In my opinion, Stockwellia trees are in the same league as California Redwoods – they’re both old, with very few close living relatives. In fact, they are probably more special, as only around 400 Stockwellia trees remain.

Some of the trees I saw in Queensland have large buttressed roots and are hollowed out so you can walk inside the tree and stare upwards. Their bark is strikingly red, and their enormous size means you have to crane your neck to see the top.

Stockwellia takes its name from a Queensland forest ranger named Victor Stockwell who worked in the Boonjee area on Mount Bartle Frere where the trees grow. While the species wasn’t officially scientifically described until 2002, it had been known to botanists for many decades. 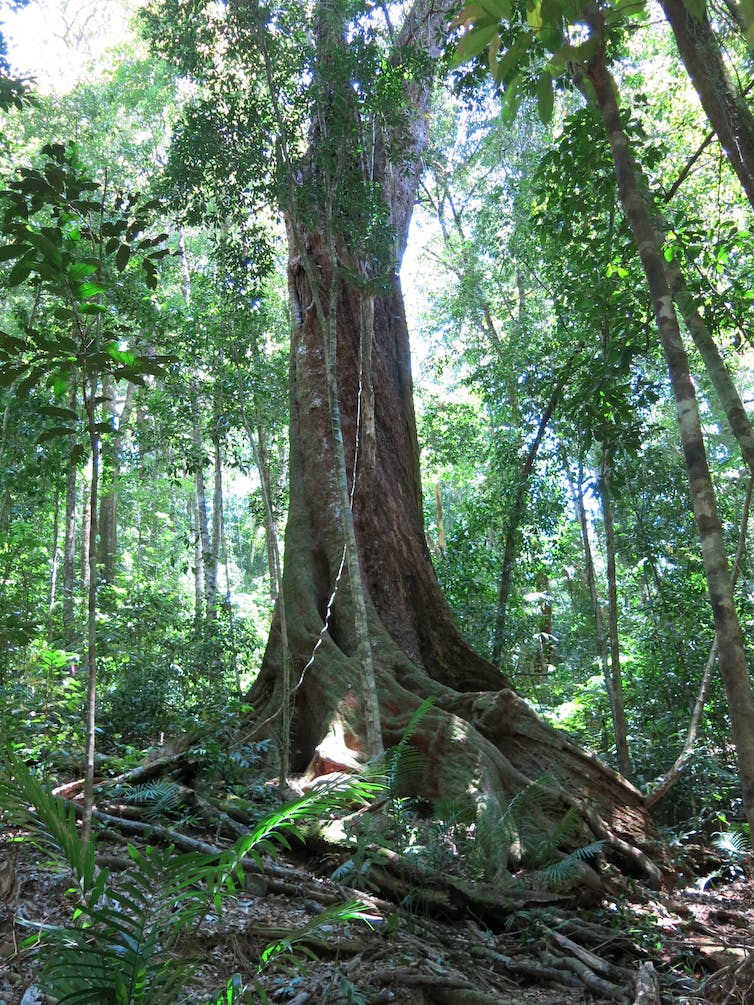 The trees were first identified using aerial photography. For Vic Stockwell, the tree was a “puzzle” because despite his vast experience in the forests of Far North Queensland, he was surprised to come across a species of tree he didn’t recognise.

In the early 2000s, a DNA study found Stockwellia belonged to a group of rainforest trees called the “mesicalypts”, a name coined by my colleagues and I.

Mesicalypts are a sister group to Australian eucalypts, and are made up of four species of rainforest plants, including Stockwellia. Eucalypts, on the other hand, have more than 800 species growing all over Australia, in much drier conditions.

DNA results suggest there is also another evolutionary group in between mesicalypts and eucalypts which only grows in New Caledonia, a species called Arillastrum gummifera. We have informally named this single species group “newcalypt” – New Cal-(edonian) (eucal)-ypt – because we didn’t want to make it feel left out from getting a new informal name. 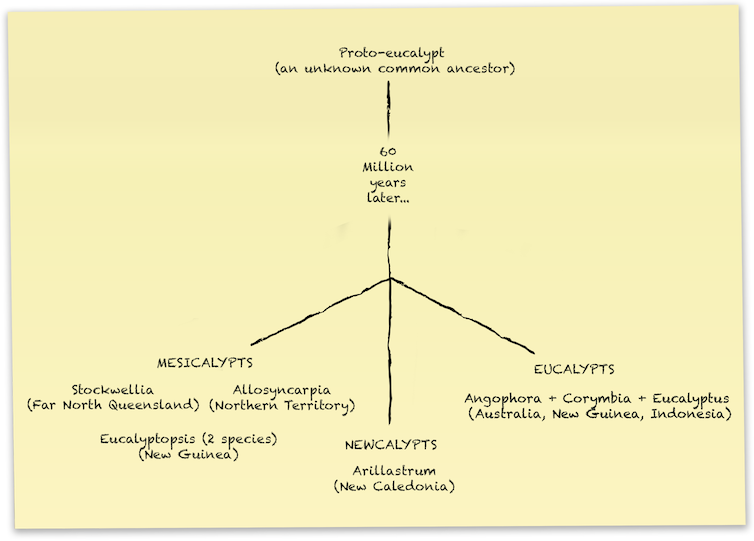 The Conversation/Andrew Thornhill Puzzling history Molecular dating of these groups revealed some even more enigmatic things about the divergence of the mesicalypts and the newcalypt from the eucalypts. The sole New Caledonian species is estimated to have had a common ancestor with the eucalypts around 59 million years ago. This poses an interesting question. How did a plant that old end up on a land mass that we think is only 30 million years old? We don’t really know yet, and botanists still debate about where it came from and how it got there. Read more: How Earth's continents became twisted and contorted over millions of years Mesicalypts are also around 60 million years old and we estimate Stockwellia diverged from its nearest living relative around 30-40 million years ago. This was in an epoch called the late Eocene when the world was much wetter and warmer, and when Australia was still connected to South America and Antarctica. 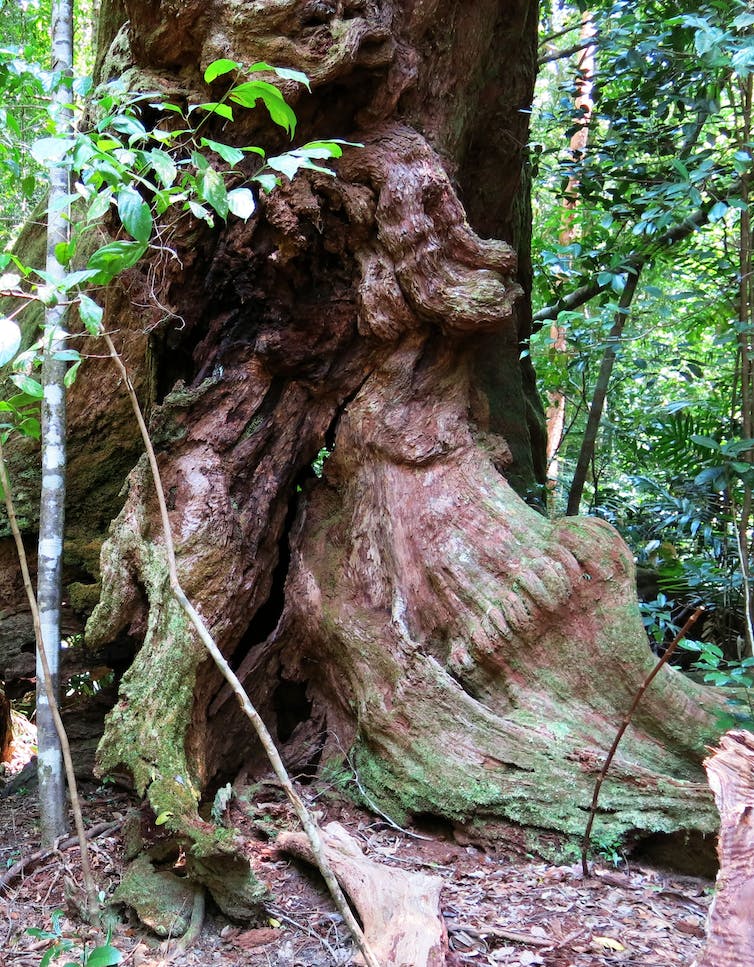 Their bark is strikingly red, and their enormous size means you have to crane your neck to see the top. Stuart Worboys, Author provided (No reuse) With no fossil record of any ancient mesicalypts, it’s unclear how diverse and widespread they were back then. If we assume more species of mesicalypts once existed, then the ones we see today are the last living survivors from a very different past. Their history is also the tale of two different fortunes. The mesicalypts are better suited to live in wetter and warmer environments, and their relatives – the eucalypts – are better suited to drier and hotter conditions. When Gondwana finally split and Australia started drifting north, one group had to hang on as their suitable growing conditions began to shrink, while the other hit the jackpot and became the dominant vegetation of the continent. An extinction threat Once, the main threat to the small number of Stockwellia populations appeared to be only white cockatoos eating their seeds. But now they are menaced by something more sinister than birds. More than a decade after the species was officially named, I was taken to see the Stockwellia by Stuart Worboys from the Australian Tropical Herbarium. Read more: Invasive species are Australia's number-one extinction threat On this trip Stu found leaves of Stockwellia with myrtle rust on them – the first such recording for the tree. Myrtle rust is a disease of the Myrtaceae family, and was accidentally introduced from South America in the late 2000s. It attacks plant leaves, fruit and, in some cases, kills the plant outright. The Australian Myrtaceae have had no time to adapt to myrtle rust. What is happening now could cause the extinction of some extremely unique Australian plants – including Stockwellia. 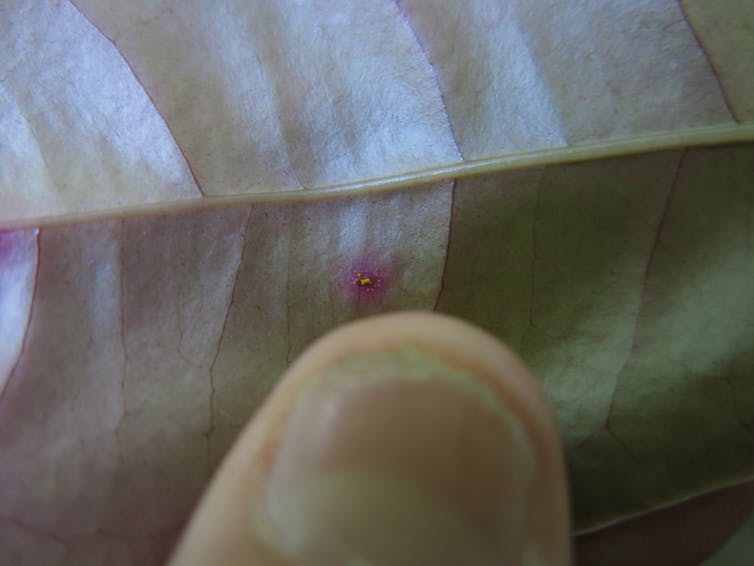 Myrtle Rust poses a threat to these ancient trees, and the disease might have come from the shoes of tree-hugging visitors. Author provided (No reuse) It is sad to think a plant group that has hung on for so long, in a secluded part of Australia, minding its own business, now faces an introduced threat. The hunch is that the myrtle rust was introduced to Stockwellia from the shoes of one of its human visitors. Unfortunately, we may have loved the tree to death. Let’s hope it’s tough enough to withstand the rust and live for many more millions of years. If it is lost, it would take with it 40 million years worth of evolutionary history in Myrtaceae. And after surviving so much tumultuous history of changing continental climates, cyclones, and everything else that a tropical environment could throw at it, that would be a very sad thing.