Now our new study shows that honeybees too can learn to match symbols and numerosities, much like we humans do with Arabic and Roman numerals. 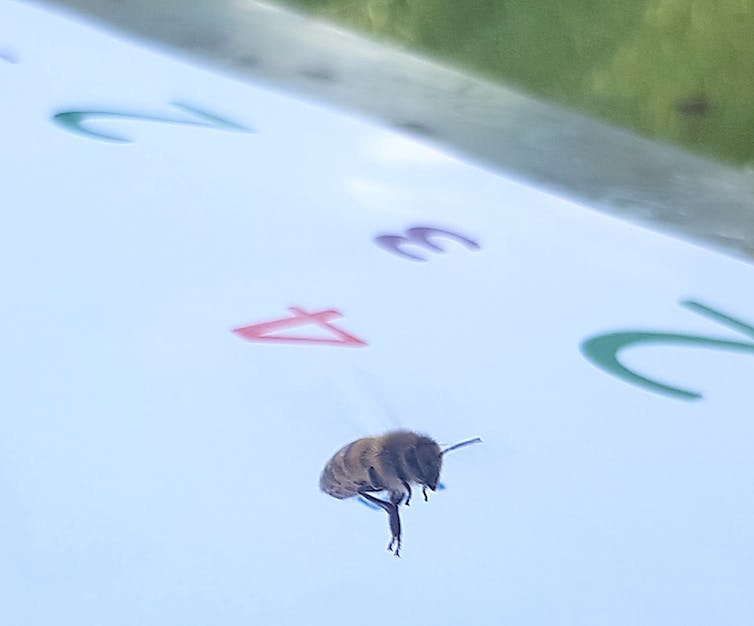 Read more: Can bees do maths? Yes – new research shows they can add and subtract

Language is the ability to learn and use a system of symbolic representations for communication. This includes a capacity to relate signs to abstract information.

For example, letters grouped together make a word which we can read, and sounded words put together in the correct order allow us to have a conversation. Human language can incorporate spoken, written, visually signed, or tactile forms like braile.

Around the world humans have developed many different spoken and written languages. However, mathematics in particular is often regarded as a “universal language” since the mathematical concepts that describe values and equations do not depend on cultural or other frameworks.

We are interested in the question of whether numerical symbols are truly universal – that is, whether they also work for species that are not human.

The language of honeybees

The honeybee is a super organism for the study of comparative information processing in a brain. In 1973 Karl von Frisch was awarded a Nobel Prize in the field of Physiology and Medicine for his demonstrations that the honeybee can communicate with hive mates via a symbolic dance language.

von Frisch showed that a foraging bee which locates rewarding flowers can fly back to a hive and signal both the direction and distance of the nutritious flowers via a “waggle dance”. Other bees can interpret the dance language to know where to fly to collect nectar.

We wondered if such an impressive communication system meant that honeybees could learn another type of symbolic language, a basic symbolic number system.

Interestingly, chimpanzees, Rhesus monkeys, pigeons, and a single African grey parrot named Alex have demonstrated the skill to learn either Arabic numerals or English names for numbers. This shows us that while no non-human species appear to have developed a symbolic representation of number, it is not because they lack the brain capacity to understand such representations.

Our work has already shown honeybees can learn and apply challenging numerical concepts such as greater vs. lesser items, a quantitative valuation of “zero”, and simple arithmetic.

We took this knowledge a step further with our latest research.

How do bees learn?

To train honeybees to match symbols (called “signs”) and number amounts (called “numerosities”), we used a subset of the symbols previously used to train pigeons on a similar task. 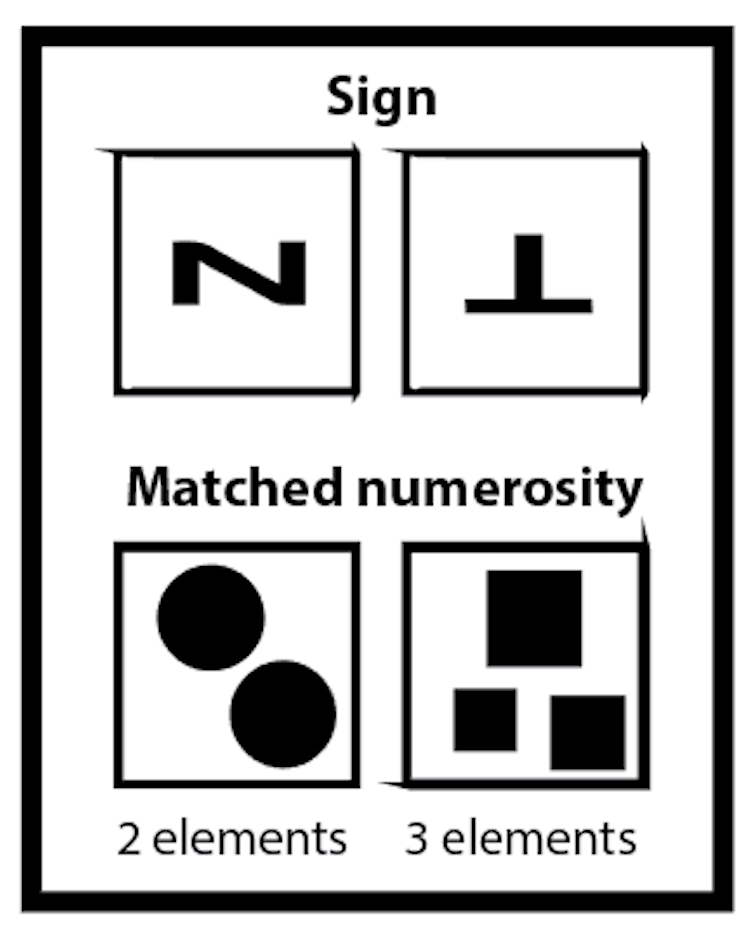 The signs and numerosities used in the study. Scarlett Howard, Author provided

Bees were trained to fly into a Y-shaped maze. Inside the maze the bee would view a stimulus. The bee would then fly into the decision chamber were it would view two options, one correct and one incorrect.

For example, if a bee viewed an N-shaped sign, she would need to choose a display presenting two items. She would need to be able to do this regardless of the shape, pattern, or colour of the items presented.

If the bee chose correctly she would receive a sugar solution, but if she chose incorrectly, she would taste bitter quinine (which does not hurt the bee but is not pleasant for her). Importantly, neither the quinine nor the sugar can be smelled by the bee, so the only cue for decision making is the visual one. 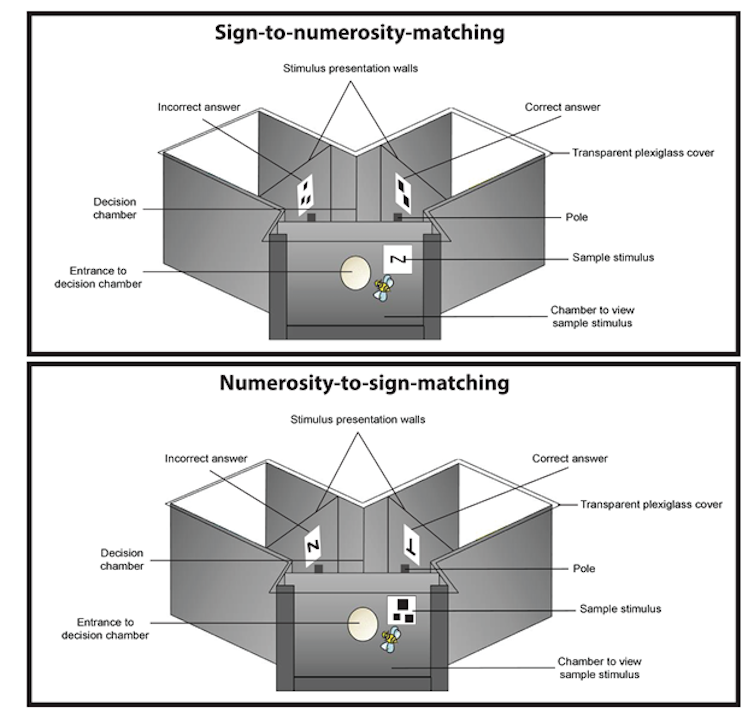 The Y-maze apparatus and examples of stimuli used. Bees were trained to either match a sign with a numerosity or a numerosity with a sign. Scarlett Howard, Author provided

After training was completed bees were tested in several conditions with completely novel patterns, colours and shapes and continued to prefer to match the sign with the numerosity, or the numerosity with the sign.

Interestingly, however, we found bees were unable to reverse their learnt tasks. If a bee had learnt to match a sign to a numerosity, she could not then match a numerosity to a sign, or vice versa. It appears the association between the number and the symbolic representation was only learnt in one direction and was unable to be reversed.

Interestingly, these kinds of learning outcomes – referred to as “operational schemas” – are sometimes applicable to how humans learn too.

While no other species besides humans has spontaneously developed a language for numbers, our research suggests an insect can understand and learn basic representation of numbers through symbols.

The system we taught to bees was limited in several ways. For example, we trained bees to link just two quantities and two symbols. Also we do not yet know if bees gave quantitative value to the symbols; we simply know that they can link the symbol and quantity together.

And yet it is remarkable bees displayed some capacity to understand numbers through symbols.

We’re left wondering whether we as humans are so very special after all – that perhaps the ability to learn mathematics could be universal.

Despite the limitations of the current research, we have demonstrated, to a small extent, symbolic communication with an insect species, which we have been separated from by over 600 million years of evolution.

Our research is laying the foundations for developing a communication system with very different animal species, and shows the differences between human and non-human animals are not as great in some regards as we might previously have thought.