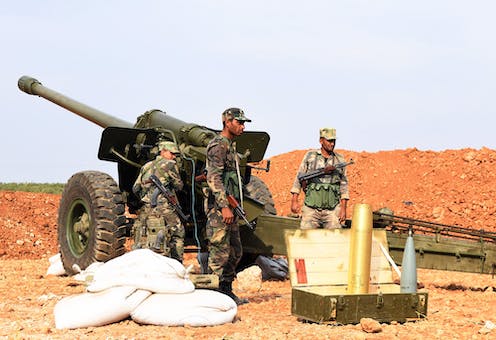 Despite the shaky ceasefire, the risk of economic sanctions from the US and worldwide condemnation, Turkey is likely to stay in Syria for a long time.

Read more: As Turkish troops move in to Syria, the risks are great – including for Turkey itself

The anticipated clash between Turkey and Bashar al-Assad’s Syrian government is also unlikely to eventuate, for three three reasons:

Has Turkey achieved its objectives?

Even though Turkey has been building its forces on the border for some time, the US-allied Kurdish YPG (which Turkey considers a terrorist group) was caught by surprise. They were busy fighting Islamic State and not expecting the US to allow Turkish forces across the border. Battle-weary YPG forces were no match for the powerful Turkish army.

As a result, Kurdish commanders begged the Trump administration to intervene. The ceasefire deal was struck to allow YPG forces to withdraw beyond what Turkey calls a “safe zone”. Trump declared the ceasefire to be a validation of his erratic Syrian policy.

Turkey’s immediate objective of establishing a 32-kilometre deep and 444-kilometre wide safe zone across its border with Syria will likely be achieved.

Yet establishing this zone is just the precursor to Erdogan’s three primary objectives. Those are to resettle millions of Syrian Arab refugees in northeastern Syria, as a result helping to prevent the establishment of an autonomous Kurdish administration and, finally, to ensure his political survival by maintaining his alliance with the Turkish nationalist party (MHP).

The June 2019 political loss of the important city of Istanbul to the main Turkish opposition party, primarily due to Syrian refugee debates, has been an important trigger for Erdogan to act on his Syria plans.

These objectives require Turkey to remain in Syria at least until the end of the Syrian civil war. This would mean the status of northeastern Syria and its Kurdish population were clearly determined in line with Turkey’s goals. These outcomes could take many years to eventuate.

So, any withdrawal before the primary objectives are met will be seen as a defeat within Turkey. Erdogan wants to enter the 2023 presidential elections claiming victory in Syria.

With the US no longer a serious contender in Syrian politics, Assad and Russian President Vladimir Putin are the only leaders capable of stymieing Erdogan’s objectives.

Prior to Turkey’s military intervention, the relationship between the Kurdish leadership and Assad administration was one of mutual avoidance of conflict. Since the beginning of the civil war in 2011, they have never clashed militarily.

The expected outcome of this policy was that the Kurds would have an autonomous region in northeastern Syria and an important role in post-civil war negotiations. Assad had no choice but to agree to this in order to stay in power.

Read more: The Syrian war is not over, it's just on a new trajectory: here's what you need to know

The Turkish intervention opens new possibilities for the Assad government. The speed of the alliance between the YPG and Assad indicates the Syrian government senses an opportunity.

The Kurdish-Assad alliance allows Assad’s forces and administration to enter areas they could not enter before. Assad wasted no time in wedging his forces in the safe zone by seizing the major Kurdish town of Kobani in the middle of the Syrian-Turkish border.

Despite the Kurdish-Assad alliance, resettling Syrian Arab refugees in Kurdish regions will weaken Kurdish claims to the region and suit Assad’s goal of a unified Syria that he totally controls.

There is another immediate benefit for Assad. Idlib is a strategic city in northwestern Syria and the last stronghold of the Syrian opposition to Assad. Resistance groups defeated elsewhere were allowed to gather in Idlib. Careful negotiations took place in the past few years to avoid an all-out bloodbath in Idlib.

Assad will almost certainly ask Turkey to abandon its patronage of Idlib and opposition forces l ocated there. In return, Assad will allow a temporary Turkish presence in northern Syria.

So, although Kurdish forces signed a deal with Assad, it is highly unlikely this will evolve into active warfare between Turkey and Syria. Instead, the situation will be kept tense – by Assad forces remaining in Kobani – to allow Erdogan and Assad to get what they want.

Russia will prevent a Turkey-Syria clash

This is where Russia and Putin come in. Russia is an ally of both the Turkish and Syrian governments. To save face, Erdogan is unlikely to sit in open negotiations with Assad. Negotiations will be done through Putin.

When Putin and Erdogan meet on October 22, the main negotiating points will be to prevent a war between Turkey and the Russian-armed Assad forces. Erdogan will ask the Russian and Assad governments to allow Turkey to stay in the zone it established. In return, Russia will request further concessions on Idlib and perhaps more arms deals similar to the S-400 missile deal.

A deal between Erdogan and Assad suits Russia because it serves the its main objectives in Syria – keep Assad in power to ensure Russian access to the Mediterranean Sea and weaken NATO by moving Turkey away from the alliance.

If the Kurds realise Assad has no intention of fighting Turkey, they may decide to take matters into their own hands and engage in guerrilla warfare with Turkish forces in northern Syria. While this may deliver a blow to Turkish forces, Erdogan will use it to back his claim they are terrorists.

Regardless of what happens, Turkey will stay in northern Syria for the foreseeable future, no matter the cost to both countries.

The eventual winner in Syria is looking to be the Assad government, which is moving to control the entire country just as it did before the 2011 uprising.