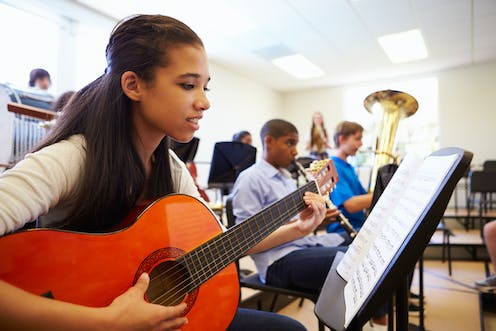 More than half of year 10 music students in NSW dropped the subject by the time they reached year 12. Their teachers said this was so they could choose subjects that would help them get a higher ATAR.

These are the findings of my PhD study where I looked at data across NSW schools and conducted interviews with music teachers.

Interviews with 50 teachers at 23 schools around NSW – including comprehensive, selective, independent and Catholic – suggest many of their best music students opt for subjects that will perform better when it comes to their ATAR.

Read more: Before you let your child quit music lessons, try these 5 things

I took figures from every school across NSW that offered music at the Higher School Certificate (HSC) level.

That’s an average loss of 58.6% of music students.

Music is often scaled down

Students starting year 11 must choose the subjects they want to study for the next two years. These choices can be made for a range of reasons: what they’re good at, what they’re interested in and what may help them in the future.

But a student may also be aiming to get into a university degree with a particular ATAR cut-off. Then, it may be reasonable, and even somewhat responsible, for that student to consider both what they may be good at and what has historically scaled well, to maximise their chance of getting the ATAR they’re hoping for.

Scaling is the process by which all student marks in HSC courses are adjusted to become “the marks the students would have received if all courses had the same candidature and the same mark distribution”.

Read more: What actually is an ATAR? First of all it's a rank, not a score

The Universities Admission Centre’s report on scaling in HSC recommends students don’t “choose courses on the basis of what you believe is the likely effect of scaling”.

But students also have access to online ATAR calculators where they can put their predicted marks in for their subjects to determine where their ATAR will most likely lie, and to see how those marks have scaled in previous years.

It’s reasonable then, for a student to use such information to decide which subjects they should pursue for their HSC.

Read more: Does the Suzuki method work for kids learning an instrument? Parental involvement is good, but other aspects less so

Several of the teachers I interviewed acknowledged the ATAR effect on music enrolments.

One said music was a “negative drag on the ATAR”. Another said Music 1 is “just going to lower your ATAR”. One teacher told me music was “not rated very highly among the ATAR”.

One teacher said a particular student was advised by her curriculum co-ordinator to drop music so she could get the ATAR to become a doctor. And another teacher was constantly losing music students at his school because of the perception of scaling.

I’ve lost a lot of very good musicians to science and maths, because they’ve decided to drop the subject, which has been pretty devastating at times.

Teachers should consider allowing their high performing music students to complete their HSC music course early, in Year 11. This is known as acceleration.

As one teacher put it, accelerating high-achieving music students allows them to get their Band 6 (meaning they’ve received a mark from 90-100) for music so they can focus on other subjects in year 12. A student’s ATAR in NSW is calculated from their best ten units, including English. Going into year 12 with two units already completed can alleviate study time and boost confidence.

Some schools in NSW already use the acceleration option for music students. It allows their musically gifted students to still keep music as a HSC subject, and helps maintain healthy senior music cohorts at their school.

According to my analysis, around 20% of schools in NSW offer accelerated courses in the HSC for courses including modern history, studies of religion, physics, economics and, most commonly, mathematics.

Given this prevalence of acceleration, particularly in the HSC, teachers and schools should consider this a reasonable and achievable strategy to accommodate their musically gifted students.